Warner Bros. thinks it has a serious Oscar contender this year with Extremely Loud and Incredibly Close, and it’s not tough to see why.

You’ve got a thrice Oscar-nominated director Stephen Daldry (The Reader), Oscar-winning leads Tom Hanks and Sandra Bullock, and it will be released in a limited theatrical run on December 25th so it can qualify for Oscar consideration.  It will expand nationwide on January 20, 2012.  Wouldn’t you know it: Oscar nominations are announced on January 24th.  What a coincidence.

This is my long-winded way of leading up to the news that Warner Bros. has released the first image from the movie.  It’s an image of Oskar (Thomas Horn) being held by his father (Hanks) even though the events of the book center around Oskar’s father dying in the 9/11 attacks and Oskar trying to uncover the secret of the key he found in his father’s closet.  Apparently the film has found a way to incorporate Hanks’ character (most likely through flashback). 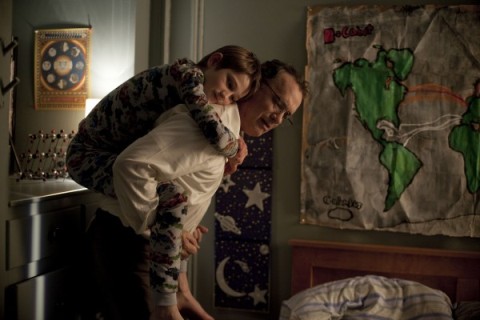 Oskar (Thomas Horn) is convinced that his father (Tom Hanks), who died in the 9/11 attacks on the World Trade Center, has left a final message for him hidden somewhere in the city. Feeling disconnected from his grieving mother (Sandra Bullock) and driven by a relentlessly active mind that refuses to believe in things that can’t be observed, Oskar begins searching New York City for the lock that fits a mysterious key he found in his father’s closet. His journey through the five boroughs takes him beyond his own loss to a greater understanding of the observable world around him.

This September marks the 10th year anniversary of the terrorist attacks in the USA.