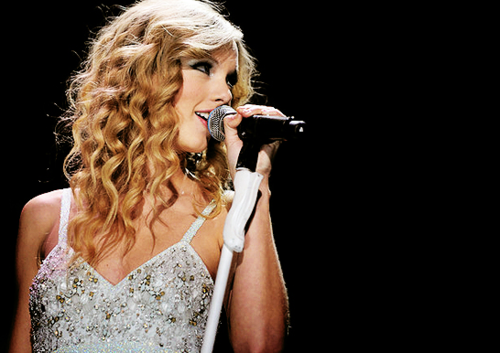 Taylor Swift's devotion to her fans in unparalled.

TAYLOR Swift's fans are making her sick. Not really. Well, kind of. Accidentally of course.

Plenty of artists hail their fans, very few run through the audience mid-show and hug them. Or hold a nightly meet and greet after the show, a time when many stars are already back at their hotel.

Yes, Taylor Swift is something special when it comes to making fans feel special.

"In 20 years I've never seen an artist do this much for their fans," says her long-time publicist Paula Erickson.

Sure, it's her job to talk Swift up. But anyone who's seen Swift at work can't question her devotion to her fans.

Which is where illness comes in. In July Swift reluctantly postponed some shows on her US Speak Now tour. "I've never had to do that before, it was devastating," says Swift, a woman for whom postpone isn't usually in the vocabulary.

But that vocabulary and, more problematically, her singing voice were out of action due to a nasty case of bronchitis.

Camp Swift let the singer recover, with theories that a combination of singing in the rain at an outdoor show ("She thought if the fans are out there getting wet, she would get wet with them," Erickson says) and hugging a random flu-riddled fan may have led to the bronchitis.

Not that Swift is being any less hands-on since kicking bronchitis' ass. Her people suggested at the height of the H1N1 virus pandemic that maybe she should limit getting up close and personal with fans. Swift disagreed and carried on with her flesh-pressing business as normal.

Backstage at Swift's New Jersey show (she'll do four shows in Newark's Prudential Centre - her promoter says they could have easily done another four) the 21 year old is a true professional.

There's a swag of media, radio personalities and competition winners to meet. A smiling Swift hugs every one, instantly connecting with everyone from teary teens to hardened radio jocks.

The hugs continue into the show, with Swift walking through the crowd from the back of the arena to the front stage. "I get to walk through and see these people up close I've seen at a distance the entire night," Swift says. "If I see someone who's just so passionate or crying or decked out in a crazy outfit from one of my videos it makes me want to hug them.

"I feel like I have a lot of people in the crowd who understand me. It feels like we're friends. It's more like camaraderie. They know all the words to every single song. I can hear this loud chorus of voices, louder than my own."

The friend factor explains why Swift's security guards are seemingly as at ease as a security guard can be. "Everybody's always really nice," she says. "My fans all seem to be cool people. I really like them a lot. I trust them, that's why I walk through the crowd."

At the New Jersey show a pre-show commotion is due to a special guest in the building - Taylor's mum Andrea Swift - who her daughter's savvy fans recognise and applaud.

But there's an ulterior motive. Hundreds of fans are waving signs saying "T Party" - a post-show event Mrs Swift is gatekeeper for.

"You can't get or buy tickets for it," Erickson says. "People try to 'VIP' their way in there, but it's just for fans selected from the crowd."

Indeed Andrea Swift stands near the mixing desk, her eyes peering to the very back rows, looking for the fans with the best costumes, the biggest lights or loudest voices.

"When my mum comes out to shows the fans get really excited," Swift says. "They kinda know if they sidle up to her they might get a meet and greet pass."

Swift and mum have been doing the meet and greet thing from day one. When Swift was supporting Rascal Flatts, Tim McGraw and Brad Paisley back in the day (well, in 2006) she'd always sign CDs.

"It started with just a few fans," Andrea Swift says. "Then it started growing to a few dozen to a few hundred. And Taylor always stayed until the very last person got their autograph, no matter how big the crowd.

"And she'd always stand up, even after she'd played. She would tell me 'Mom, if they've stood for four hours waiting for an autograph I'll stand for four hours as well'."

The T Party is something else. It takes place in a backstage area that looks like a cross between a Stevie Nicks video and the inside of the I Dream of Jeannie bottle. There are rugs, a bird cage, floral prints, vintage furniture - and pizza, soft drink and photos of Swift with her fans.

"It's designed after my apartment," Swift admits. "It helps to feel at home on a long tour like this."

Swift arrives into the T Party with her hair still wet from a quick post-show shower. Refreshingly there's no stylist fussing over her locks and no problem posing for photos despite the less-than-glamorous "do" sure to be shared over Facebook pages.

The shower has also removed all trace of one of Swift's nightly rituals - a lyric scrawled in marker pen on her left arm. The other hand always has a 13 drawn on "for good luck". This night's lyric came courtesy of Gavin DeGraw, "belief builds from scratch, doesn't have to relax, it doesn't need space," from his song Belief.

"It's different each night," Swift explains. "It's a smart lyric or a lyric explaining how I feel that day. Lyrics I relate to."

The Speak Now tour demonstrates an accelerated maturity, with cues taken from theatre shows like Wicked, which Swift fell in love with, plus aerialist work. It's highly theatrical, what with Swift's dramatic pauses - "I actually started out in theatre before I realised writing my own songs was what I wanted to do," she says.

Over almost seven minutes Swift vents in style and with near-military lyrical precision. "Maybe it's you and your sick need to give love then take it away," she sings. "And you'll add my name to your long list of traitors who don't understand.

"It's definitely an emotional song," Swift admits. "When the fireworks come down when I sing 'I'm shining like fireworks over your sad empty town' that's just this moment of triumph at the end of the song."

C LASSILY, she refuses to sing and tell; enjoying the debate about who her songs are about.

"It's the one thing I do have, I've never admitted exactly who a song is about," Swift says. "First and last name, never done it. It's fun to hear people talk about who they think which one is about. Sometimes it's right, sometimes it's wrong, but we'll never know, will we?"

Swift says it's only journalists who ask her. During her copious fan time the name and shame questions never come up.

"When these songs come into my fans' lives they make it about their ex-boyfriends, it's no longer about my ex-boyfriend. The fans allow me into their cars and their bedrooms and their stereos. They make the songs about them."

Swift is a smart operator. She can bat any nosy question away like a politician twice her age. She's managed to remain a musician first, celebrity second.

Not that she hasn't been linked to a few celebrities, most recently Jake Gyllenhaal - no doubt coming to her next album. She's adjusted her internal settings for fame.

"It all depends on what your perception of normal is," Swift says. "Is my life what it was before all this happened? It's a completely different life. But for the better I think. Sometimes if you go out in New York or LA people take pictures of you. For the most part I live in Nashville. It's really quiet. If I go to a restaurant and a fan comes up and wants a picture, that's not a problem. My life is the life I've always wanted. Getting to be on stage and call it a career, I think my life is as normal as it could be."

She hasn't developed the sixth sense that can spot a paparazzo from 10 paces.

"Sometimes they catch you off guard, they have these long lenses," Swift says. "I don't want to become that person who's always looking around for a photographer. It makes the people you're with feel weird. If there's a dude taking pictures through a window he's going to be taking pictures through the window regardless of whether I freak out or not."

She'll continue her movie career with a role voicing an animated character in The Lorax next year. Movie scripts are coming in with abandon - often with a certain theme.

"I don't really have any interest in playing an aspiring country singer," she laughs.

While she's launching a fragrance line with the Swiftesque title Wonderstruck, she's also making sure she keeps writing songs for her fourth album while on the road.

"The last six months before the album comes out I'm a crazy person," she says.

"I'm constantly writing, trying to come up with a better verse or chorus. It's interesting to be around me when it's crunch time for a new album."

Watching her work the room in the T Party, hugging fans, asking them about their lives, you have to wonder if she's really that nice. Yes, appears to be the answer.