What do you mean, LaQueeta? ( 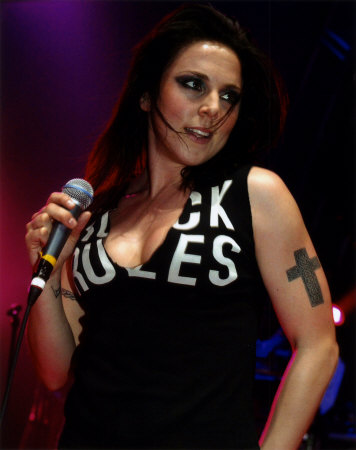 Many will remember her as the trackie-wearing, muscled hard nut of the Spice Girls.

But 15 years on, glowing and ­beautiful, Melanie Chisholm is a totally different woman.

Crediting motherhood for “changing her life”, nowadays nothing riles the softly spoken star... except Rihanna.

Fiercely protective and in love with daughter Scarlet, she is vehemently opposed to the sexualization of ­children, and believes artists like Rihanna have a responsibility to censor any “inappropriate” performances.

Mel says: “It’s a very hot topic at the moment and is something we do have to talk about. People have to take some responsibility because we’ve got to a point where over-sexualisation of young children has gone too far.

“I think music is a big part of that. Women in music, very successful women, are extremely sexual and they have young fans. It is inappropriate.

“Rihanna has responsibility and although culture’s always changing, it’s changed too much. It needs to be dealt with. It’s reached saturation point, we owe it to our kids to protect them.

“Rihanna’s free to do as she pleases, of course, but I think her take on the criticism she’s had is interesting.

“I love Rihanna, I think she’s a f****** brilliant artist, with great songs, a great record and she looks fantastic... but she’s not a mum. Maybe if she becomes one she’ll feel different. I hope so anyway.”

It is a subject the Scouse singer feels passionately about, ­especially given her band were famously lambasted during their heyday... for wearing crop tops. She adds: “It’s a long time ago since the Spice Girls were first together and we were criticised for being sexual. Yes, we wore crop tops, I mean look how much has changed. But we always sat down as a group, be it in photoshoots, videos, interviews, and if somebody felt ­something was ­inappropriate for our young fans, we did something about it.

“And I think that’s something young people in the music industry today, like Rihanna, should do now.”