So the 'Switched at Birth' finale happened last night.. 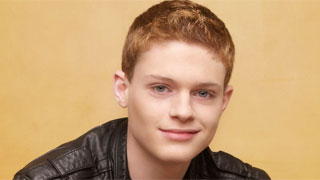 Good news, "Switched at Birth" fans! The series' first season has just been extended to an almost unheard of 32 episodes. While the summer finale airs tonight on ABC Family, you'll be able to catch 22 more episodes beginning in early 2012.

In the meantime, we chatted with stars Sean Berdy, Lucas Grabeel, and Vanessa Marano at Sunday's Teen Choice Awards about what's to come.

In tonight's episode, Bay's biological dad comes back into the picture, played by "Brothers and Sisters'" Gilles Marini, and that love triangle between Bay (Marano), Daphne (Katie LeClerc), and Emmett (Berdy) will heat up.

As for who Emmett should end up with, Berdy plays coy. "I can't answer that question! That's up to the viewers. That's you guys and your opinion," he says. "Both would be excellent. I can imagine a wonderful storyline with either one."

One thing you will get more of when the season continues is Grabeel's music. "I'm writing more music for the show," he confirms. "So hopefully we'll get to do some more concerts."

Berdy may be joining in, as his character played drums for Toby's band early in the season. "I liked to play drums when I was a little boy, so to play drums on the show now is cool. I have to learn Lucas's music," he says. "I have to learn his beats and that's tough but in the long run, I think I did alright."
(source)
ughhhh... this show. #1) fuq bay #2) fuq the creepy 40 year old moms who ship bay & emmett "ebay" #3) wilkie, get in me