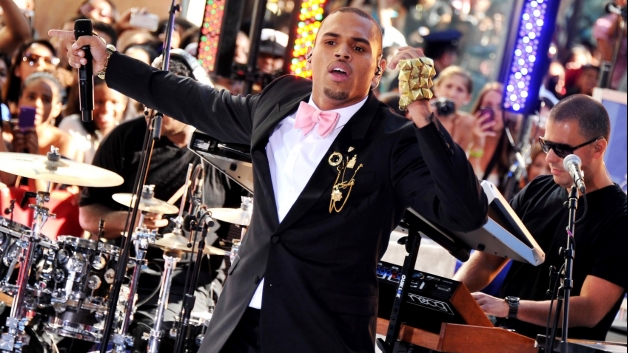 Despite being forgiven by Rihanna herself, major media outlets like CNN still aren't fans of Chris Brown -- especially Anderson Cooper.

"Ladies and gentlemen, particularly ladies, Chris Brown has been cast in a movie. And not just any movie, it's a romantic comedy based on a self-help book about relationships," Cooper said recently on his nightly show, "Anderson Cooper 360." "And I, for one, cannot imagine why this did not happen sooner because if there's one thing you can say about Chris Brown, who's currently on probation for viciously assaulting his then-girlfriend Rihanna, he just oozes romance."

Cooper went on to point out one of Brown's early online apologies to Rihanna and fans as another point of conflict.

"Check out this love poem he posted on YouTube five months after he repeatedly punched her in the face and threatened to kill her while her mouth was filled with blood … ," Cooper said.

Not long after Brown took to Twitter to respond to the CNN anchor's comments and not how one would expect.

Act Like a Lady, Think Like a Man is the film adaptation of Steve Harvey's bestselling book of the same name. Production is already underway in Los Angeles and the film is slated to hit theaters in April 2012.

dancedallnight
August 9th, 2011, 04:51 am
i mean i believe that chris brown is a disgusting sack of shit and wish he would go away, but i really don't get why it was necessary to bring up the rihanna incident.

ladypolitik
August 15th, 2011, 01:32 am
I actually agree. I think the point could've been made without mentioning her. People need to realize that speaking so wantonly about a former victim's victimization, especially as a jab at the aggressor -- even if made with "good intentions" -- tends to dehumanize the survivor.

I love when Andy gets bitchy in his little Ridiculist segment.
(no subject) -

bgwqlc
August 9th, 2011, 04:53 am
This whole movie is a clusterfuck. It has really good black actors who have to do this bullshit so they can work. Anderson is right. I will not believe Chris Brown being romantic in a movie. He just seems like such a dick.

peachie_ego
August 9th, 2011, 04:53 am
I love how everyone is cheering on such unprofessionalism. =/ Stay hypocritical ONTDers.

are you serious? Troll much?
(no subject) -

possevi
August 9th, 2011, 04:59 am
Chris Brown is a piece of shit human being, if calling him out for being a fucking asshole is unprofessional than so be it, tbh.

quote_me_once
August 9th, 2011, 04:55 am
anderson cooper is ONTD's bias and chris brown is one of their biggest hates.

never change, y'all.
it's not like you do, anyway.

quote_me_once
August 9th, 2011, 05:18 am
i'm not saying he doesn't, but one of ONTD's biggest biases making a comment about one of their biggest hates is going to make for some ordinary, obligatory commenting.

hotcinnamonbuns
August 9th, 2011, 04:57 am
i can't wait for anderson to fill the oprah sized hole in my heart

lettya
August 9th, 2011, 04:59 am
Team Anderson forever, although I wish people would stop giving Chris Brown attention so he can go away.

torogi
August 9th, 2011, 05:01 am
Oh Anderson, I still remember the day our paths crossed and the papzz were chasing your fine self.

As for Chris Brown --- THIS BITCH.

hangthemj
August 9th, 2011, 05:01 am
i fucking loathe chris brown; it's seriously unhealthy how angry i get when i read posts about him.