TWO AND A HALF MEN WITHOUT SHEEN 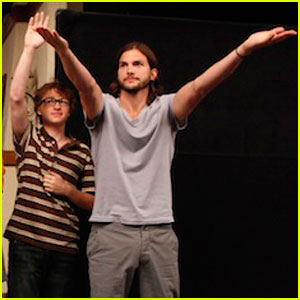 Ashton Kutcher takes a bow with co-star Angus T. Jones on the set of Two and a Half Men on Friday (August 4) in Los Angeles.

The 33-year-old actor, also pictured with cast mates Marin Hinckle, Jon Cryer, Holland Taylor, and Conchata Ferrell, taped his first episode as the new star of the CBS sitcom.
Ashton will be playing Walden Schmidt, an Internet billionaire with a broken heart who buys the Malibu bachelor pad once owned by Charlie Sheen's character, Charlie Harper.

Two and a Half Men’s ninth season premieres Monday, Sept. 19, and will reportedly open with Charlie’s funeral. 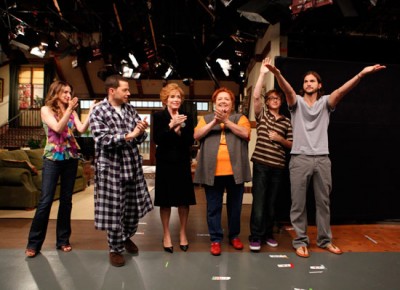 are u gonna watch this new season?
source 1
source 2