'The Dark Knight Rises' to Film Scene With Pittsburgh Steelers 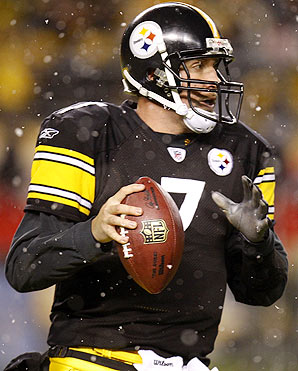 Quarterback Ben Roethlisberger is among the players expected to participate this weekend.

Members of the NFL's Pittsburgh Steelers team will be filming a scene in the Warner Bros. film this weekend playing football players at Heinz Field. Quarterback Ben Roethlisberger and a dozen of his teammates, including Hines Ward, Willie Colon and Maurkice Pouncey, are expected to participate during Saturday's filming. Thousands of extras will be on hand to play fans.

"I'm kind of getting everybody together," Roethlisberger told the Pittsburgh Post-Gazette on Friday. "I heard it's going to be a neat thing at the stadium. I don't think it will be a big part, it's not like we're chasing Batman down or anyting. It's something neat that in 10 years or 20 years we can tell our kids we were in a movie."

This doesn't come as too much of a surprise as The Dark Knight Rises has been filming in the Pittsburgh area.

"From what I've heard, it's going to be like a pre-game, warming-up type thing,'' Roethlisberger said. "I don't know the whole concept. There's a Gotham team, a football game. We'll be wearing uniforms."

According to the Post-Gazette, Roethlisberger has a budding friendship with the film's executive producer Thomas Tull. Two years ago, Tull joined the Steelers' ownership.