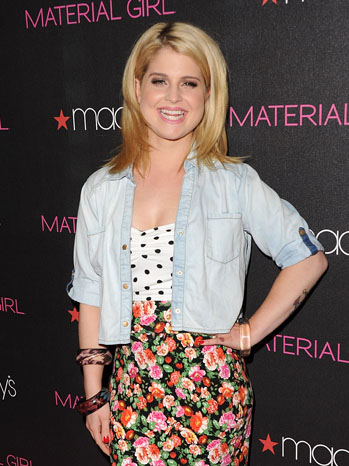 The E! Fashion Police co-host called the songstress "fat," and criticized the Dutchess of York for reusing outfits.

The daughter of Ozzy Osbourne has been dropping fashion un-friendly advice all over the airwaves, taking jabs at both Christina Aguilera and Duchess of York, Kate Middleton.

On E!’s Fashion Police, the 26-year-old host went after Aguilera for her outfit at an event in Munich, Germany last month.

"Maybe she is just becoming the fat b--ch she was born to be. I don't know.”

Osbourne, who has spoken out about her own challenges with finding a healthy weight, continued her jabs at The Voice judge.
"She called me fat for so many f--ing years
," Osbourne continued.
"So you know what? You're fat too."

Osbourne went on The Tonight Show with Jay Leno on Wednesday, where she criticized Kate Middleton’s fashion decisions.

Middleton, who is often praised for her fashion choices, was seen at the wedding of Princess Anne's daughter Zara Phillips in outfits she had worn before.

"In England they're like,
'Look how thrifty she's being, showing the British public that the royals are in a recession as well',
" Osbourne said on the show.

"Well, I'm sorry but if I had that job I would only wear it once,
" she continued.

"If I am going to be the future bloody Queen of England I'm gonna wear that dress once because I'm giving up the rest of my life, all of my privacy, at least I can get a new dress every day,"
said Osbourne.