Sorry, Peter Parker. The response to the black Spiderman shows why we need one 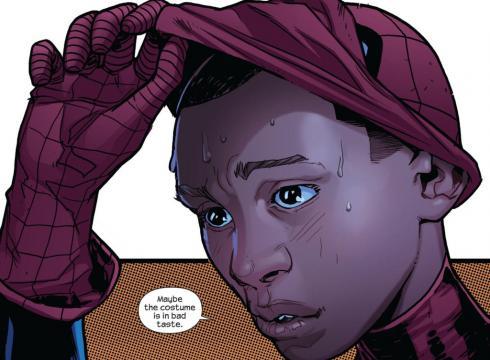 USA Today reported that the Ultimate Universe of Marvel comics was killing off Peter Parker and having a new Spiderman, the half-black, half-Hispanic Miles Morales, take up the suit. And this has ignited a minor uproar.


Aside from the fact that the response to the “black Spiderman,” has been absolutely thumpingly out of scale and crazy, we hit a larger problem: the problem of The One Who Looks Like Me.

The world of comics-readers and toy buyers seems to be divided into two camps. (Forget Glenn Beck – he says he doesn't care about it anyway.)

“It doesn’t matter what the character looks like so long as he tells a compelling story!” some say. “Look,” the others say, “after a certain point, you have to wonder why all the leading roles resemble somebody else and you’re stuck with the sidekicks and Spunky Best Friends and Guys With Lame Powers Who Get Killed Off Immediately. I want a hero who looks like me.”


How do you strike a balance?

Superheroes have long served as a sort of national ubermyth. Their deaths and origins and intricate conflicts portray, on a grander scale, and in spandex, all kinds of truths about ourselves that we can only metaphorically grasp at.Silly man in a suit? Not quite. This matters, viscerally. So the debate has barred no holds, as the comments on USA Today suggested.For every person who comments something like, “It doesn’t take kids long to realize that all the main characters look like someone else and all the sidekicks and extras look like you. This is a good thing…not saying it’s going to change the world, but it will change some kid’s outlook on the world,” there is someone else saying, “So, why now come out with homie the spider man? Wonder if he wasn't elected marvel would do this. but at least the comic book character will HELP better than the real life comic elected.” (In humanity’s defense, this has received 15 negative votes.)


There is no limit to the asininity of people on the Internet. One of the laws of the Internet is that the stupider the forum, the nicer the comment, which explains why websites entirely devoted to sexual images of cats have generally friendlier and higher levels of discourse than those for most major newspapers.(LOL)

But what about the larger question? “What’s next? A Spiderman who is half black, half Cuban gay vegetarian who works as a Community organizer and drives a Prius that practices Tai Chi?”My answer would be, “Why not?” although I’m not sure about the Prius. Seems suspect. I want a superhero to whom I can relate, after all.

And that’s the problem.

What makes a character relatable?

It seems to be a widespread belief among the makers and buyers of toys that people only go in for the Ones That Look Like Me.
Pleasant Company, creator of the ubiquitous American Girl dolls, has always subscribed to this, creating an array of American Girls – all uniformly spunky, all uniformly cheery and intrepid – that fall everywhere along the spectrum. There is Addy the escaped slave, Samantha the plucky Victorian, Josefina and Kit and a whole range of others, with hair of different color and hue, glasses or no glasses, and variable levels of almost everything except pluck and determination.

My American Girl literally bills itself, in the name of the page, as “Dolls Who Look Like Me.” It makes sense, they argue, to have superheroes in whom everyone can glimpse themselves. Walk down the aisle at the grocery store and find a familiar-looking face, and the sale is made. “I’d like the one that’s blonde and white,” we apparently say. “Scandinavian, if possible. Tell me a story I am already familiar with. That is why I read. Not to escape.” After all, my thought on reading every Dickens novel that I have ever read has been, “Ooh, White People!” Same with Proust and H. G. Wells and Herman Melville and James Baldwin and — never mind, I may be getting carried away. A good story well-told? Nonsense — it’s the melanin.


Maybe everyone’s missing the point. You don’t buy comics because of the hue of the character’s skin. Sure, that might be what gets you to pick up the issue from the shelf, but after that it’s up to the narrative to pull you in. Simply looking alike won’t cut it.

“I grew up in the Projects of NYC. I was born here, my parents came from Cuba in the 40s. My favorite comic book character was Captain America - a blonde haired, blue eyed, white guy and I never felt anything negative about having to look like him or anything like that,” says one commenter. Create a character good enough and people won't worry about the skin color or even the species. This argument cuts both ways. But for years it's only been cutting one way. Maybe Miles can change that.

So I hope Miles Morales turns out to be a compelling enough character that everyone shows up at the store demanding action figures of him. “Peter Parker was always a whiny nebbish,” they’ll say. “Pass the Miles Morales! Miles is the best!”Maybe this can end the awkward apartheid of the playpen, where people pick the One That Looks Like Me.

Why are we judging our comics by anything but the content of their characters?

How do I fix the source coding?