Commercials director and visual effects wizard Michael Gracey has been chosen to helm the China-set epic, formerly based on the Snow White legend.

While Universal and Relativity jockey over their rival Snow White movies, Disney is quietly making moves on its own revisionist Snow White feature, a live-action project now called The Order of the Seven.

Commercials director and visual effects wizard Michael Gracey has been chosen as the man to helm what is being envisioned as China-set epic. Francis Lawrence (Water for Elephants, I Am Legend), who was attached to the project for several years, has moved on.

Andrew Gunn is producing the movie, which earlier this year got a refurbished script from Toy Story 3 scribe Michael Arndt.

The unique project, which Disney has been developing since 2002, focuses a bit more on Snow’s seven companions, who aren't as cute and jolly as in the 1937 classic Disney animated film Snow White and the Seven Dwarfs. In fact, the project, which was initially known as Snow and the Seven and had scripts by writers ranging from Michael Chabon to Jayson Rothwell, is evolving into more of an original action film, with the Snow White elements being minimized.

In this iteration, the seven are a 19th century-set disparate band of international warriors belonging to a centuries-old order who have lost their way. Their meeting with an Englishwoman being chased by an ancient evil is the catalyst for their redemption.

While the project is set in China, the warriors will be from locales near (the U.S.) and far (Russia), and each warrior will have a unique fighting style.

Gracey was an animator at Animal Logic, the company that worked on Happy Feet, before teaming up with a fellow visual effects artist to embark on a commercials career that led to award-winning spots for T-Mobile and Lipton.

Sources say that Gracey’s next step, after completing a deal, will to begin storyboarding the movie while designs of characters are made and fights are choreographed. The plan is to start production start next year. Gracey is repped by CAA, Partizan and Hirsch Wallerstein. 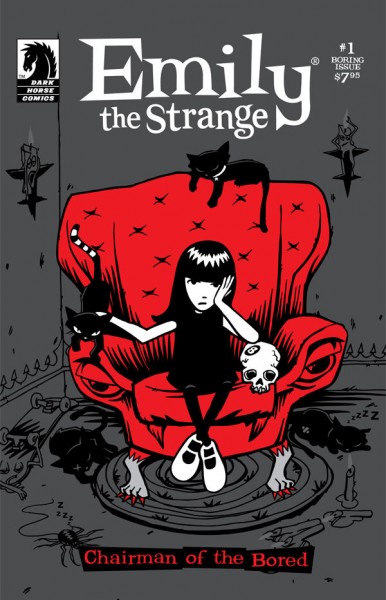 Melisa Wallack has been tapped for the Chloe Moretz starrer.

Melisa Wallack, who wrote the script that became Relativity’s high-profile Snow White project, has been drafted by Universal to pen Emily the Strange.

Dark Horse Entertainment has been developing the character as a movie project since 2008, setting it up at Universal in 2010.

The story line is being kept under wraps, although the aim is to tell the origin of the punk and gothic figure and how she comes to gain her abilities that fuse technology and imagination. The story will also focus on her relationship with four cats: troublemaker Sabbath, schemer Nee-Chee, imaginative Miles and leader Mystery.

There is a certain amount of irony in Wallack’s hiring since Universal has been engaged in a cat-and-mouse game of one-upmanship with Relativity over competing Snow White movies. Universal is about to start shooting Snow White and the Huntsman while Relativity is in production on its untitled movie starring Lilly Collins and Julia Roberts. Wallack wrote the spec script that has become Relativity’s tentpole to be released March 16, 2012.

Wallack, repped by ICM attorney Howard Abramson, wrote and co-directed Meet Bill, a 2007 indie starring Aaron Eckhart and Jessica Alba, as well as Science Fair, which is set up at End Game Entertainment. Both scripts were on the Black List.