J.K. Rowling to appear on new series of Who Do You Think You Are? 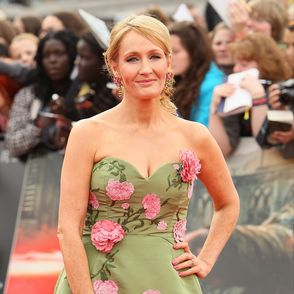 Harry Potter author JK Rowling broke down in tears as a cherished family story was punctured during filming on the new series of Who Do You Think You Are?

The famously private writer said the early death of her mother was one of the reasons she agreed to go through the "very emotional experience" of researching her family tree for the BBC One show.

She told the Radio Times her mother Anne, who died aged 45 in 1990, was "very interested" in her French roots but never got the chance to explore them.

Rowling said: "So a huge motivation in looking into my family history is my mother. It's very much bound up in that loss."

The 46-year-old writer said she was "braced" for surprises in the family tree show.

She said: "I probably felt as everyone does when they agree to be the subject of this programme: excited, apprehensive, very curious, definitely nervous. I think I cried on three separate occasions - I don't know whether I've set a record."

One of the most emotional moments came when Rowling discovered the family story about her great-grandfather winning the Legion d'honneur for his bravery in the French army was not true.

The writer, who herself was awarded the medal in 2009 for services to literature, mentioned her relative, Louis Volant, in her acceptance speech.

The show uncovers that the Louis Volant who won the medal for an act of wartime bravery is not related to her and the keepsake treasured by her aunt isn't a bravery award but probably a badge from the former wine waiter's trade union.

She said: "There were a lot of big surprises, some wonderful, and one rather upsetting. However, I went into the programme wanting the truth, no matter what it was."

Her maternal grandmother, Louisa, is also believed to have been born out of wedlock.
Rowling, whose personal wealth is thought to be half a billion pounds, wrote the first book of the Harry Potter series following her divorce while living on benefits in a cold Edinburgh flat with her baby daughter. The experience left her clinically depressed.

“What I’m very struck by is how many single mothers I’m descended from in this line of the family,” she said in an interview for the programme.

“Twenty years ago, I was teaching and writing in my spare time and was very skint. And not long after that, I became a single mum, so I feel the connection.”

Christine’s husband Jacques died while she was pregnant with their seventh child, while Salomé, a housemaid in Paris, was an unwed mother of four. Lizzie was left to raise Rowling’s grandfather alone after her husband divorced her and returned to his native France. Rowling told the Radio Times: “I went into the programme wanting the truth, no matter what it was, because I knew so little about my French ancestry.

“It is humbling to see yourself as a tiny part of a huge family tree, but it is also strangely reassuring.”

Rowling married her second husband, Neil Murray, a doctor with whom she has two children, in 2001. She is president of Gingerbread, the charity for single parents.

She previously said being a single mother made her a "hate figure" and "bogeyman" to the last Conservative government.

"Women like me... were, according to popular myth, a prime cause of social breakdown, and in it for all we could get: free money, state-funded accommodation, an easy life."

"Between 1993 and 1997 I did the job of two parents, qualified and then worked as a secondary school teacher, wrote one and a half novels and did the planning for a further five. For a while, I was clinically depressed. To be told, over and over again, that I was feckless, lazy — even immoral — did not help."

source
Mods I've looked and couldn't see this posted anywhere but if I'm wrong will delete. Or you will :)