At 17, Saoirse Ronan is aiming to sustain her reputation for classy roles into her adult career. 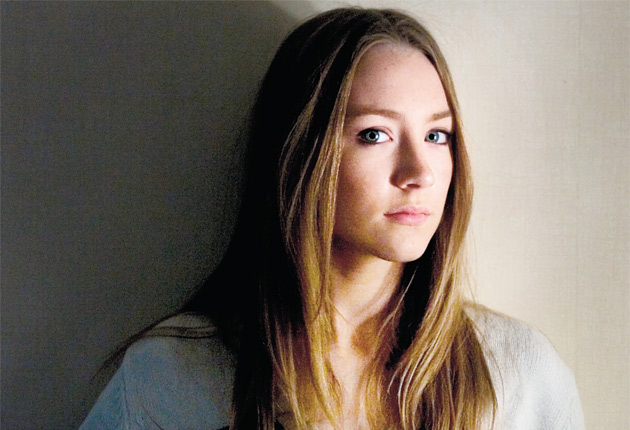 She's the Oscar-nominated star of Atonement, whom director Peter Jackson calls "amazing on screen". But when we meet, I'm given an early reminder that Saoirse Ronan (it's pronounced "Sir-sha", by the way) is still only 17. I've just told her that I've seen the final Harry Potter film. "I can't believe it's the last one," she squeals, flushed with excitement, her blue eyes widening. "I've basically grown up with Harry Potter, as so many kids my age have. It's kind of a part of my life. I'll go see it no matter what."

Five years ago, she auditioned for the role of Harry's fellow Hogwarts pupil Luna Lovegood (eventually won by fellow Irish actress Evanna Lynch). "I was too young – but at the time I thought, 'I'd love to be in Harry Potter.' When I was younger, I used to think they had the best job in the world." But now it's different. Potter is over – and it's Ronan who is in the enviable position. With directors clamouring to work with her, she also doesn't have to deal with hordes of screaming fans like her Potter peers.

Rather than mania, Ronan seems to inspire loyalty wherever she lands. "Saoirse is the most focused and dedicated actor I've ever met in my life," says Joe Wright, who directed her in his film of Ian McEwan's Atonement and in this year's teenage assassin tale Hanna. "She drives herself harder than anyone else ever could or would."

Stanley Tucci, her co-star in Jackson's adaptation of Alice Sebold's The Lovely Bones, in which she played the murdered teen Susie Salmon, notes, "She handles herself as well as any seasoned actor. I wouldn't even be able to finish a sentence at her age. She's a real actress. Bottom line."

She does not look particularly adolescent; her blonde hair is rich, her skin snow-white, and her figure slender and willow-like. There's something of Cate Blanchett about her – both in terms of appearance and artistic selection. Her latest role is actually her first animation voiceover – and another example of her ability to align herself with classy material. Arrietty is the new film from Studio Ghibli, the Japanese company behind Spirited Away and Howl's Moving Castle.

Arrietty is a charming adaptation of The Borrowers, the 1952 Mary Norton novel about a family of inch-high people living beneath the floorboards, previously filmed as a live-action movie in 1997 with John Goodman starring. "I loved the idea of tiny people living in our world and having a completely different life," says Ronan, "and having to struggle in different ways." Ronan voices the title role in Arrietty – a 14-year-old girl who is desperate to go "borrowing" for the first time, and filch sugar cubes and other tiny objects from the house above.

"She is a bit nosy, isn't she?" laughs Ronan. "But in a nice way. I think she's very curious and inquisitive. She's gutsy. I think she's very excited by the idea of growing up and finally being able to help her dad with her livelihood. And when she goes borrowing for the first time with him, she's kind of in awe of his skill and how wonderful she thinks it all is." It's all too tempting to see Ronan as similarly independent, though still wanting to follow in the footsteps of her father.

Paul Ronan is an actor, whose credits include Veronica Guerin and Ballykissangel. "My Dad and I always read the scripts," she beams. "Most of the time, he'll read it first – to see if there's anything in it that's a bit explicit. Then I'll read it afterwards and we'll discuss it." Ronan was born in New York, in the Bronx, after her father and mother, Monica, moved there when things got tight in Ireland. He'd worked in construction and as a barman, she as a nanny. So the story goes, he brought her as a babe-in-arms on the set of The Devil's Own – and she met Brad Pitt.

Eventually, her family moved back to Ardattin, in County Carlow, where Ronan – an only child – spent the rest of her childhood, quite happily it seems. "I've always lived in the environment where I've been allowed to express myself," she says.

Along the way, she was home-schooled – because, she told one interviewer, "teachers [were] giving me a hard time. Teachers and students." Having started her career in the Irish TV drama The Clinic when she was nine, it was the usual thing – local fame equals petty jealousy.

While her first major film role was in the little-seen Michelle Pfeiffer comedy I Could Never Be Your Woman, it was Atonement that switched her on to acting. "That's when I thought, 'This is something that I don't think I can really let go off now.'" At 11, she was nominated for a Bafta, a Golden Globe and an Oscar. For the Academy Awards, she had to fly in from New Zealand, where she was filming The Lovely Bones. "I remember Pete Jackson told me beforehand, 'When you go on to the red carpet, because it's so hectic, take a moment to breathe and take it all in and remember it.' And I did. I think if you just float on through, it can be very easy to pass by it."

Such is Ronan's sky-high confidence, she has already turned down a reunion with Jackson on The Hobbit, his long-awaited prequel to The Lord of the Rings. Does she have any regrets? She giggles for a second. "I mean, yeah. I'm really disappointed that I couldn't do it. I really am. Any excuse for me to go back to New Zealand, and work with those people I'd take. But there are other projects as well that I've had to consider... and to do that for over a year, it wouldn't have left me time to do anything else."

Having completed Violet and Daisy (a second teen hit-girl story after Hanna), she's now trying to figure her next move. Up for grabs is a third union with Joe Wright, for his Tolstoy adaptation Anna Karenina, or a first hook-up with Neil Jordan, for his female vampire tale Byzantium. Then there's The Host, Andrew Niccol's proposed adaptation of the Twilight author Stephenie Meyer's novel about benevolent parasites that invade Earth.

Ronan seems a little worried, as if her next film will really define her transition to adult roles. "At the age I'm at, it's a tricky time to try and figure out which is the best project for me to do," she says, earnestly. "I've never really felt like I was a child actor. Just an actor who happened to be quite young."

'Arrietty' opens in cinemas on 29 July. 'Hanna' is released on DVD and Blu-ray on 29 August