Beyoncé, Beats and Blackface: Who’s Really Running Her World? (Hint: It's the Illuminati)

J/k, this isn't an illuminati post. This is an ontd_feminism post. Although I don't think Clayton Perry, the author of this editorial, is a member! 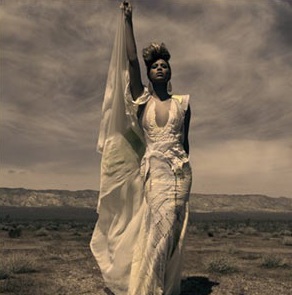 On Thursday, April 21, 2011, Columbia Records officially released the lead single to Beyoncé's fourth studio album. Although dubbed as an ode to female empowerment, "Run the World (Girls)" is revealed to be a farce underneath the surface.

Let’s start with the title, which references a prepubescent state of womanhood. Yes, it may be true that "girls" is often utilized – in colloquial terms – as a friendly name for female companions; but when one examines Beyoncé's discography, which includes titles such as "Independent Women," "Single Ladies" and "Naughty Girl," it is safe to assume that she understands the power of word choice. (She is a songwriter, right? [lol, if stealing credit for songs counts as writing, then yes.]) With this particular song, however, there seems to a conflict between its embrace and usage of the word "girls" as a term of endearment as opposed to a belittling portrait of womanhood. But then again, who pays attention to semantics? Even so, did "girls" really need to be mentioned over 40 times?

Considering Beyoncé's love for grand displays of female camaraderie – like her all-female band – why didn't she hire a female director for her lavish video production? Sanaa Hamri, a Moroccan American, would have been an excellent choice – having directed for Nicki Minaj ("Fly"), Mariah Carey ("Can't Take That Away") and Yolanda Adams ("Open My Heart"), as well as feature lengths films with female stars, Something New (starring Sanna Lathan) and the Queen-Latifah-produced Just Wright [Gurl, I thought you were trying to make an argument in favor of this director... That movie was Just Wrong.].  Instead, she hired Francis Lawrence, who is known for his directorial work on Constantine (2005) and I Am Legend (2007), in addition to his artistic vision on the following risqué singles: Adina Howard's "(Freak) and U Know It" (1997), Lil' Kim's "How Many Licks?" (2000) and Britney Spears' "I'm a Slave 4 U" (2001). Lawrence even directed Jay-Z's 1999 video "Girl's Best Friend," the penultimate anthem dedicated to a woman's – er umm, girl's – desire. How ironic then that Sanaa Hamri directed Jay-Z's poignant video for "Song Cry" (2002)?

Eight years removed from the release of Dangerously in Love and the monster smash "Crazy in Love," Beyoncé is showing signs of the development of "artistic fatigue" – a condition in which an artist with universal name recognition and critical acclaim releases subpar material simply because it will sell off of the strength of his/her brand.  After fourteen years as a recording artist, Beyoncé has failed to deliver a masterpiece album akin to the Miseducation of Lauryn Hill, and upon examination of the source material that inspired the backing track for “Run the World (Girls),” such an album seems to be far beyond her reach.

PS: Remember when she performed for Muammar Gaddafi's son?????