90s Stuff We Wish Would Make a Comeback

Let's face it, there's a lot of stuff we loved as a kid that just disappeared! Some of our fave actors broke out to become bonafide Hollywood A-listers (Leonardo DiCaprio, Joseph Gordon Levitt, Neil Patrick Harris) while the rest of them cowered into a black hole somewhere. Fashion evolved, technology advanced and the simplicity of life vanished.

Let's take a look back at some of our favorite stars, musicians and fads from back when times were simpler. This stuff needs to make a comeback, like now.

This was a no-brainer. He was at the top of my list because, well, he was effin cute! I remember ripping out photos of this kid in Tiger Beat, BOP and Seventeen magazines. From Home Improvement and The Lion King to Man of the House and that sh*tty Christmas movie he made with Jessica Biel, this kid was awesome. Come back to us, JTT!

She is all that. I was obsessed with The Baby Sitter's Club book and subsequent movie when I was younger and Rachael won me over as Mary Anne. My other slew of Rachael favorites included Tom and Huck, Carpool and of course, She's All That. She did a small guest stint on Dawson's Creek too, but has been MIA ever since.

Forget the "Cha Cha Slide" and that stupid "Dougie" dance, it was all about "The Macarena" back in the '90s. Granted I had no clue why two old Spanish dudes were singing this, it brought everyone out onto the dance floor. I don't know about the rest of you, but I first fell in love with Devon in Little Giants. He was the quintessential heartthrob. Then he appeared in Casper and Now and Then, and came back for about thirty seconds in the early 2000s with Final Destination and Idle Hands, which I was fairly certain were the same movie. He also appeared as "Stan" in Eminem's video, but come on, that was like 10 years ago. Where ya hiding, Devon? Zetus lapetus! Kirsten Storms came way before Miley Cyrus and Hilary Duff. She was the Disney girl I wanted to be when I was 12 years old. Not only did she get to kiss Gregory Smith (swoon!), but she also got to hang out with Johnny Tsunami. Um, hello?!?

If you think any other boy band should make a comback before 'N Sync, I say bite your tongue! They were THE boy band. And besides, NKOTB and Backstreet Boys are already kind of coming back. I know Justin Timberlake is being lame about this whole thing, but I will await the day that the "POP Odyssey" tour lives another day.

Kids don't stay home on Friday nights anymore. But back then, we'd kick back on our couches and watch the awesome lineup of Family Matters, Step by Step, Full House and Boy Meets World. Gosh, I miss those days.

Oh, Freddie. You may have married your I Know What You Did Last Summer costar Sarah Michelle Gellar, but that certainly didn't help your career. Summer Catch was just awful. But hey, we still want to give you a chance. Come back!

Benny "The Jet" Rodriguez! I don't know any single girl that didn't have a crush on this kid. Guys too. Not only was he amazing in The Sandlot (amazing is an understatement), but he won me over in the Mighty Ducks sequels too. Rumor has it, Mike works as a firefighter in L.A. now and is living the low-key life. We respect that and all, but we miss Benny!

Shawn Hunter was the power behind the success of Boy Meets World, let's be honest. He made the worn, leather jacket the coolest thing ever. Psh, Ben Savage. Psh. 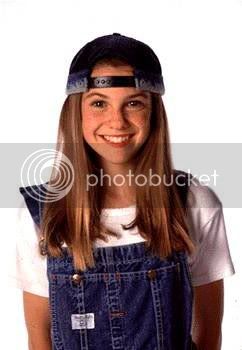 Oh, Alex Mack. We loved you and your ridiculous hats and awesome superpowers. Larisa Oleynik grew up and starred in the amazing film, 10 Things I Hate About You. I know she's done guest stints here and there since, but we are long overdue for a full-blown comeback.


Trunks invites you all in