Beyonce in the Studio with OddFuture 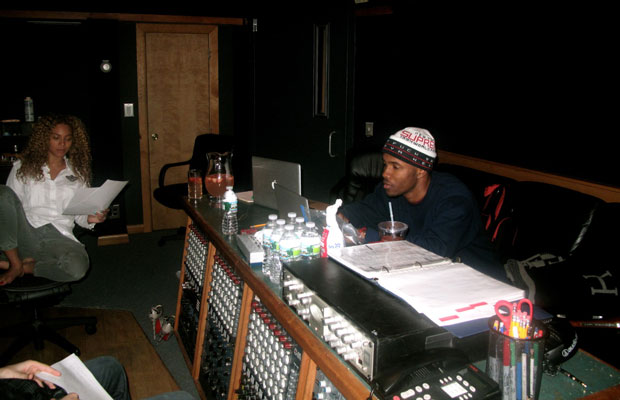 Mere weeks after making a splash with his mixtape Nostalgia,Ultra, Odd Future's Frank Ultra has hit the big leagues. The singer-songwriter, who’s written for Brandy and Justin Bieber, posted a picture of himself in the studio with Beyoncé, working on the superstar’s fourth album.

“This is the room i’m working in this day. not to brag but man, this is surreal," wrote the Cali crooner. “Like..she’s singing my songs. if time were to stop right now, the past couple weeks would be near the top of the highlight reel for my short time on earth.”

In addition to Ocean, Beyoncé has been in the lab with hitmakers including Sean Garret, Ne-Yo, Diplo, and Sleigh Bells recording her first album since 2008’s I Am… Sasha Fierce.

“Beyoncé is one of those artists that always tries to push the envelope, so nothing is ever good enough, but that’s what makes Beyoncé Beyoncé,” Ne-Yo told Rap-Up TV, while Jim Jonsin shared his vision for Bey’s highly-anticipated project. “I’d like to take it even more Depeche Mode-ish, like ’80s electro with just some hard drums. I’d love to go there,” said the producer.