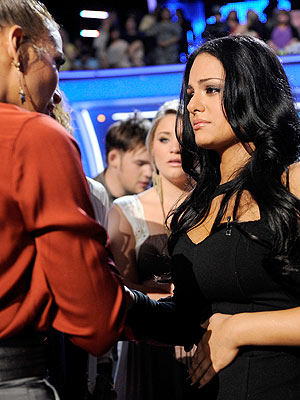 "She was one of the most talented singers we had," Lopez said, calling into Ryan Seacrest's KIIS-FM radio show Friday morning. "I'm still shocked."

Why does Lopez think Toscano was eliminated?

"Honestly, I don't know what happened," she said. "[Maybe] people thought she was safe, as I did ... Maybe there was something that wasn't connecting [with the audience] that we didn't see."

Lopez, who likened the ousted singer to a prized student, said she and her fellow judges – Randy Jackson and Steven Tyler – pushed Toscano every week because they had high standards for her and saw her talent. "Honestly, I always had the best intentions," Lopez said. "I just wanted to see the growth every week. I wanted her to shine."

After the show, Lopez, who cried at the decision, came up on stage and had a heart-to-heart with Toscano.

people
i'm still in shock, tbqh.  this is like when tamyra gray left, or even j hud.  even idol alums were in disbelief over this elimnation.  part of me thinks that it was rigged so a label can snatch her up and start her album before the tour. #iwannaseethereceipts.  whateves.  i'm team scotty now.  everyone else can gtfo.