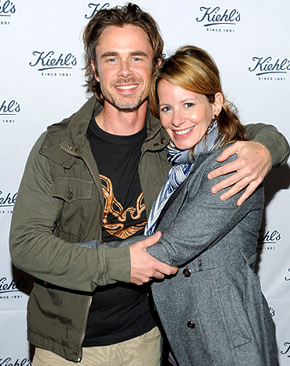 It's all about the boys in True Blood star Sam Trammell's household.


The actor and his girlfriend of eight years, Missy Yager, confirmed to UsMagazine.com that they are expecting twin boys during Kiehl's Earth Day Campaign in Santa Monica, Calif. on Thursday.


"It's very nerve racking, but we're excited," Trammell, 40, told Us of becoming a first-time father. "I'm most excited about just the lifestyle change, believe it or not, even though it's going to take away all our freedom."


Added Yager, "It's going to be very different."


Fortunately, the couple still has plenty of time to prepare before Yager gives birth later this year -- starting with building an nursery.
"We're not prepared," Trammell laughed.


"We started on a kitchen," Yager shrugged. "Go figure."


In the meantime, Trammell has been busy shooting scenes for True Blood's highly-anticipated fourth season, premiering June 26 on HBO.