The Vampire Diaries‘ bewitching Kat Graham has just confirmed a killer rumor that’s been making the rounds: a major Mystic Falls player will be offed by season’s end!

Graham, who plays teen sorceress Bonnie on The CW’s supernatural hit, is surprisingly angst-free when it comes to discussing the impending fatality. “This show has never been a safe show to be on,” she says with a laugh. “If you’re cast on The Vampire Diaries, the likelihood of you dying is very good.

“It’s a job,” she shrugs. “I know I’m a bit of a hardass when it comes to that philosophy, but I’m a huge fan of [exec producers] Kevin [Williamson] and Julie [Plec], both as people and [as] writers. So, if they’re going to explore new avenues, it’s for a good reason.”

Whatever the future holds for Bonnie — life, death or something in between — Graham assures TVD fans that her alter ego is not going down without a fight.

“Bonnie’s in a very nervous-but-prepared state now that she has her powers back and received the secret of how to take on Klaus from Jonas (Randy J. Goodwin),” Graham offers. “She knows what that entails, and she’s very much ready… She’s going to do what she needs to do, and if she is going to do anything to sacrifice herself for Elena (Nina Dobrev), she is going to do it in her way.”

Graham is extra tight-lipped when it comes to big bad über-vamp Klaus (played by British newcomer (Joseph Morgan), save for this cryptic tease: “He’s more than you imagine. That is my secret to you. That is my riddle and my big twist.”

And just in case that’s not enough, Graham leaves fans with one final zinger. “The last six episodes are huge — [there are] huge changes to the season as a whole,” she reveals. “Probably the biggest changes we’ve had in the entirety of our show.”
Kat Graham talks to TVGuide about deaths. 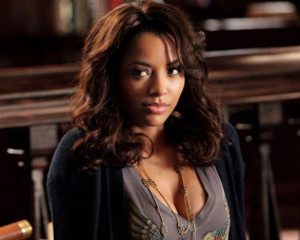 The Vampire Diaries is no stranger to death, with both major and minor characters having met their maker over the years. Unfortunately, it seems the Grim Reaper is making a return trip to Mystic Falls, times three!  Katerina Graham, who plays witch Bonnie Bennett, tells TVGuide.com: "Three huge characters are going to die — solid characters — and it's going to change the destiny of the show." Ominous! We already know that original vampire Klaus, who first appears in the April 21 episode, needs three particular people for the sacrifice the show has been hinting at all season: a witch, a werewolf and a vampire. So who do you think it's going to be? Source 1: www.tvline.com/2011/04/kat-grahams-vampire-diaries-death-tease/Source 2: www.tvguide.com/News/Vampire-Diaries-Death-1031531.aspx