RHNYC Villians Failed Attempt At Damage Control On 'The View'

Jill Says She Was *Fake Fighting* / Kelly Says Shes *Not Crazy*... And Everyone Rolls Their Eyes 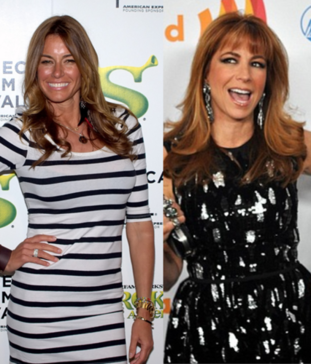 The ladies of The Real Housewives of New York visited The View this morning to hype season four of their show that debuts this Thursday on Bravo. Kelly Bensimon, Jill Zarin,Alex McCord, and Ramona Singer chatted with the hosts about last season, Bethenny Frankel, and vagina bedazzling.

If you thought the most interesting thing they talked about was decorating their hoo has, you're wrong. Jill said the show isn't real, Kelly reassured us that she's not crazy, and Alex shared that this season she really understood how to play into the reality TV scenario. Basically they all said the show is fake.

The RHONY ladies can go sell this story somewhere else, because I know that you, me, and Andy Cohen will not buy into this egotistical, self-denying load of crap.

Of course there's editing, but hey, if a Housewife says something in the woods and it's caught on film, it makes a noise. So I find it a little hard to believe that the show is entirely fake, that Jill thought her fight with Bethenny was a "wink wink" scenario for the camera, and that Kelly's breakdown didn't actually happen. Jill explains her fight with Bethenny as, you know, for the cameras. That it wasn't "real."

I don't believe for a second that Jill thought it was a fake fight orchestrated for ratings. I think she's trying to cover up her catty behavior from last season with the excuse that it wasn't her -- that she was acting. Don't think so, Jill.

When Sherri asked Kelly about her being so unstable last season, Kelly also took the tack that it was all a performance for the cameras.

Sorry, Kelly. It's not you pretending to have lost your mind, or the studio powers that be somehow injecting words into your mouth and moving your jaw to make it look like you were saying those things -- it happened. During the Reunion show last season, Kelly blamed her wacky, if not completely unhinged, behavior on "systematic bullying." Now it's because she knows how to make great TV? Doubt it.

source
LIARS LIARS LIARS. This is maybe the third reason that Jill has come up for her actions last season, its pathetic at this point that she is still trying to spin what happened. And Kelly is crazy. It is FACT that she was flown out of crazy island early, and they were scared for her safety.
Tags: reality show - bravo, the real housewives (bravo)
Subscribe
Previous
← Ctrl ← Alt
Next
Ctrl → Alt →
Previous
← Ctrl ← Alt
Next
Ctrl → Alt →