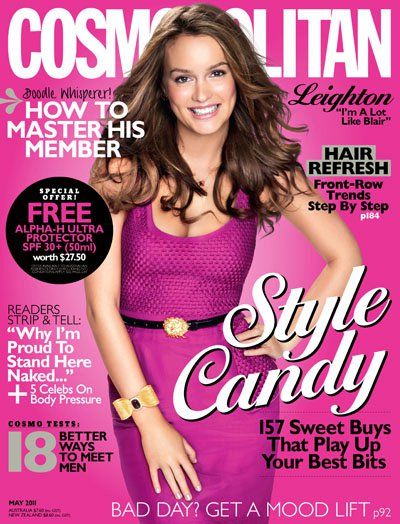 Leighton Meester landed the cover of next month’s Cosmopolitan – Australian edition, for those of you lucky Aussies — and talked about how great her Gossip Girl alter-ego is. We couldn’t agree more, obvs. She told the mag, “I love Blair and I love playing her, so to call her just a flat-out bitch is generalizing a bit.”

On her Blair Waldorf: “We’re a lot alike. She’s very realistic. The way she talks, the things she does and says are a reflection of pretty much what every girl has been through.”

On her signature Blair-isms: “The way I play her, I think it is fun to bring out that little bit of campness to the bitchy lines and little remarks she has.”

On her Queen B behavior: “But I think it is her insecurity that makes her act the way she does… and the way she was brought up. So there is always a motive behind it.”

+ Leighton Confirmed On her Twitter that she will be in Adam Sandler's "I Hate You, Dad"

+ It looks like she had a surprise birthday party on monday (april 4th) at Hollywood's Trousdale, which Michelle Trachtenberg, Aly & Aj Michalka and Alexa Vega attended. source 1, 2, 3