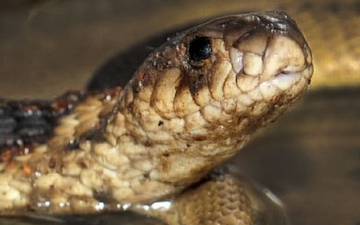 The Bronx Zoo’s Cobra, which famously went missing last Friday only to turn up on Twitter to the delight of the entire Twittersphere, has hijacked the Twitter account of American Idol host Ryan Seacrest.This is despite reports from Bronx Zoo officials that the cobra was found Thursday, a mere 200 feet from where it had escaped from a holding cage.

The joke appears to be somewhat elaborate on Seacrest’s part; not only has he staged a takeover of his Twitter account, his team has also revamped his website with features like “Britney Spears’s Albino Python: Where Is He Now?” and “5 Dos and Dont’s for Dating a Cobra.” Seacrest and his team must have suffered a moment of panic when the cobra was discovered the day before April Fools’.

Whatever, I think this is cute! I stopped watching AI years ago, but I always found Seacrest to be surprisingly likable! 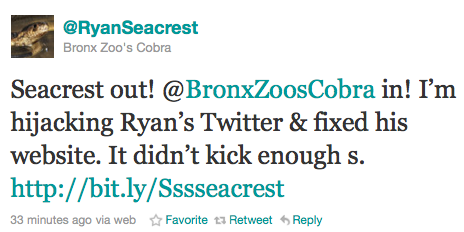