While it could be nice to say it’s too early to consider any movie as a leading contender in the 2011 Oscar race, I’m pretty sure a Steven Spielberg war movie automatically gets printed on every ballot. Spielberg’s adaptation of the World War I drama War Horse centers on Joey, a farm horse that’s sold to the military and sent to the front lines. With the brutality of the first great war as a backdrop, Joey struggles to make his way home to the farmer’s son, Albert (played by newcomer Jeremy Irvine). DreamWorks has released the first official image from the film and while it doesn’t feature Albert or Joey, it does show off co-stars (from left-to-right in the image above) Benedict Cumberbatch (BBC’s Sherlock), Patrick Kennedy (Atonement), and Tom Hiddleston (Thor).

Image and quotes via Daily Mail. 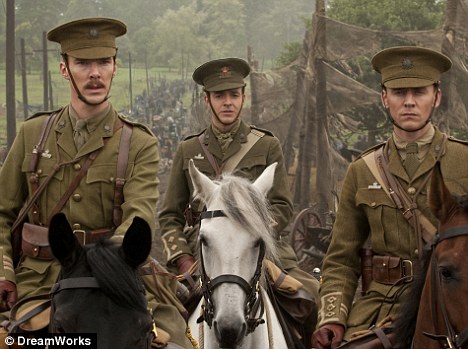 Irvine tells the Daily Mail that he didn’t grow up around horses, but started helping out local stables to become more comfortable around the animals. However, once he was cast, he was thrown into two months of “intensive horse training” with fellow actors Hiddleston, Cumberbatch, and Kennedy. Irvine says of the experience:

‘The horses have no tack on, and you communicate with them using body language,’ Jeremy explained.

‘You get them to run around you, run behind you. You’d take your shoes off and the horse would run off with the shoes. The purpose was to become as comfortable as possible with the horses.’

While Irvine wouldn’t describe himself as an “animal person”, he does consider himself to be a World War I and II history buff. “My bedroom’s like an armoury,” he said. ‘I’ve got a huge collection of WW1 and WW2 weaponry.” But nothing had prepared him for being on the battlefield of a Spielberg movie:

Jeremy recalled one scene where the British cavalry charge the German machine guns. ‘It’s the weapons of the old world — our men on horses — meeting the absolute destruction of these tools of mass slaughter.

‘There was this line of machine guns and there’s this wall of lead coming out of these guns.

‘There were real explosions at my feet, bodies flying through the air, stunt men getting shot at. It was terrifying.

‘The smoke and the smell and the taste of the guns firing. It’s not difficult to act scared in that situation.

‘There’s no doubt this was deliberate: not only to have the film look great, but to have that effect on the actors.’

The final product will inevitably be compared to the Normandy invasion in Saving Private Ryan, but I look forward to seeing how Spielberg attempts to not simply repeat himself. What I found most encouraging about Munich is that he finally left the audience with some ambiguity and inner-conflict. While I expect War Horse to be an emotional film, hopefully it won’t end with Albert crying over Joey’s grave to let us know that war is sad.

Bonus: Pic from the new issue of EW. 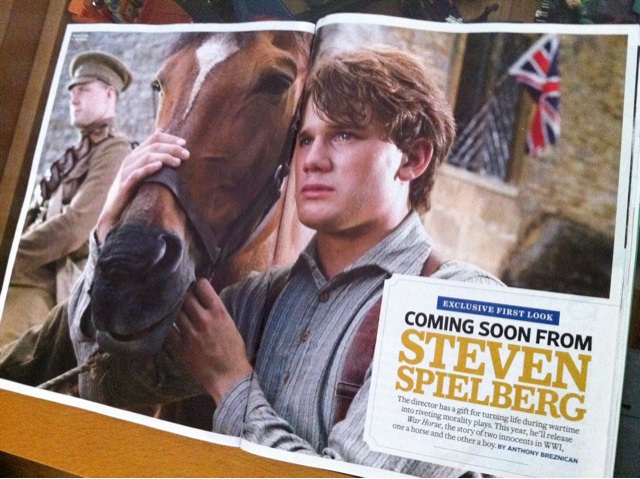