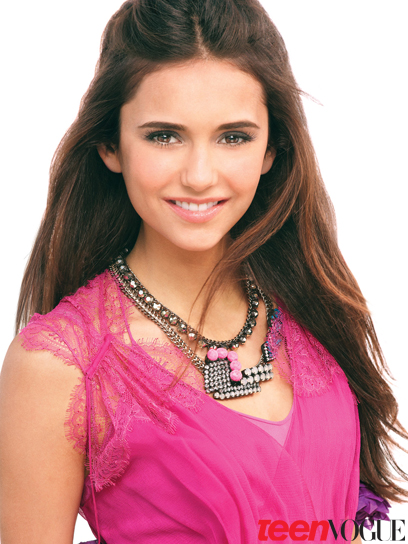 Look out, Hollywood: The Vampire Diaries' Nina Dobrev is staking her claim on heroine chic.

Let's just get this comparison out of the way: Nina Dobrev is the anti-Bella. Coming to greet me on the Atlanta set of The Vampire Diaries—the CW's take on pop culture's trendiest figures of folklore—she's unguarded and unself-conscious, all smiles and hugs. Her trailer vibes of a teenager's bedroom: Fashion magazines, stuffed animals, and shoeboxes fill floor space and various corners. There's a half-drunk bottle of kombucha on the desk, a corkboard of photos of cast-mates and friends, and notes to herself scrawled on a chalkboard-painted wall ("pay bills," reads one). Then, suddenly: "Oh my god, I'm so embarrassed." Our eyes land on a cheesy male pinup calendar hanging near the door. She runs to it immediately, nervously tearing it from the wall. "For my twenty-first birthday! It was a joke gift! Please don't judge!"

As in her day job playing dueling roles as responsible high-schooler Elena and centuries-old vampire Katherine, Nina, 22, hovers somewhere between distracted teenager and fully realized adult. First purchases for her new condo, for example, included a fondue set and a popcorn maker, while her mattress is still on the floor. In very vampiric fashion, she doesn't get much sleep. "By the time I get home, memorize the next day's work, brush my teeth, remove all the makeup, and shower to get the blood off . . ." she says, counting on her fingers. "And then I have to be back at work in seven hours. I can only do so much."

Just when you thought the genre had reached saturation point, The Vampire Diaries came along and quickly settled in as one of the CW's best-rated dramas. There's the supernaturally photogenic cast, sure, which includes Paul Wesley and Ian Somerhalder as bloodsucking brothers Stefan and Damon, respectively. But viewers also relate to TVD's subtle commentary on the idea that life is more complicated than just good versus evil. Nearly every character—from the overextended cheerleader who turns vampire to the angry jock whose inner werewolf awakens his sensitive side—is both flawed and redeemable. As the good girl pursued by both protective, loving Stefan and spontaneous, passionate Damon, Elena tries to do the right thing. But even she has a dark side in the form of Katherine, her stiletto-wearing vampire twin hell-bent on manipulating Elena and everyone she loves to get what she wants.


"When I signed on to the show, I didn't know whether I'd be playing both girls," says Nina, who tends to identify with Elena but has more fun with Katherine. "And while it's been cool, it's also exhausting because it's double the work. You invest so much of your heart and soul and energy into making even one character. It's like doing two movies at once."

Not that she's complaining. Born in Sofia, Bulgaria, but raised in Toronto, Nina landed her big break just out of high school in 2006 as teen mom Mia in Degrassi: The Next Generation and describes herself as your typical overachiever. "I wanted to be the jock, and I wanted to be a dancer and actress," she says of her time at a competitive performing arts high school in Toronto. "I was also a gymnast and very academically driven. I always had a lot on my plate and was really overwhelmed. Not much has changed- I'm constantly to one-up myself and raising the stakes." She stops and smiles adding, "Ha! No pun intended."

The CW is nothing if not aesthetically predictable in its casting, and Elena and Katherine share a thoroughly conventional beauty that's no less striking in person, which Nina maintains with smart—though not obsessive—eating. On set, dressed in a pale yellow-and-blue plaid shirt, skinny black jeans, Frye boots, and a silver beaded bracelet that was a gift from a fan, Nina polishes off a giant takeout box of fish fajitas, corn salad, and fruit. "I try to eat healthy," she says. "I like to drink my kombucha, I like smoothies, and I genuinely love oatmeal because it reminds me of childhood. But having chocolate or cake makes me happy too." Her single beauty obsession: washing her face before bed. She also practices hot yoga three or four times a week. "It's that hour and a half in my day that I get to not have voices telling me to go somewhere, do something, run lines, get curtains," she says. (Apparently, in addition to sleeping on the floor for the first week of home ownership, she went without drapes. "I was doing sit-ups, and I remember looking over, and there's somebody on the balcony across the way smoking a cigarette and watching me," she says. "I was like, I need some curtains.")
Though she remains far less cynical than her Twilight counterpart and rarely has to contend with paparazzi at home in Atlanta, she's increasingly wary of media attention, having gotten tastes of it during trips to New York City and Los Angeles. "Going to the gym, to the airport, to meetings and auditions, getting lunch—they somehow find you," she says. "I just feel like a normal girl, and the whole concept is very odd to me. But other people, like Ian, have had that experience before, so they're like, 'Yeah, this is what happens; there's nothing you can do about it.'" Speaking of Ian: Excited fans speculate endlessly about the offscreen relationship between him and Nina—proof of which has included everything from flirty tweets to videos of the pair sharing a kiss at the airport. She toes the line, neither confirming nor denying. "We expected the rumors," she says. "Like, if I wasn't dating Ian, I'd be dating Paul. A lot of people who work together end up dating, so it wouldn't be unusual, but I've never dated anyone I've worked with."
After TVD goes on hiatus this spring—"Klaus is coming," the only hint she'll give—Nina will star opposite Kellan Lutz in The Killing Game, an action indie. She hopes to fill the break between filming seasons two and three with a movie, but wants to choose wisely. "A lot of things that I'm being offered right now are horror, sci-fi, or high school–related," she says. "That's what I do every day. I want to do something different." And despite the demands of her busy TVD schedule and the industry's stiff competition, just like in high school, she's not worried about failing. "Everything I stressed out over or was upset about or cried over then was a learning experience," she says. As always, Nina's up for the challenge.
Edited for teenvogue.com. For the complete story pick up the April 2011 issue of Teen Vogue, on newsstands March 15! 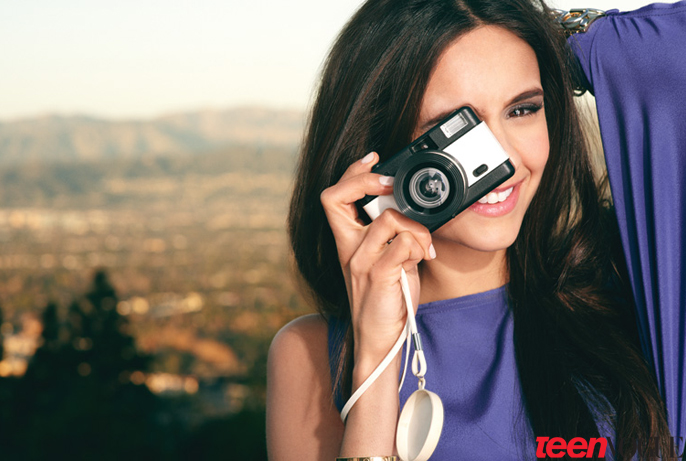 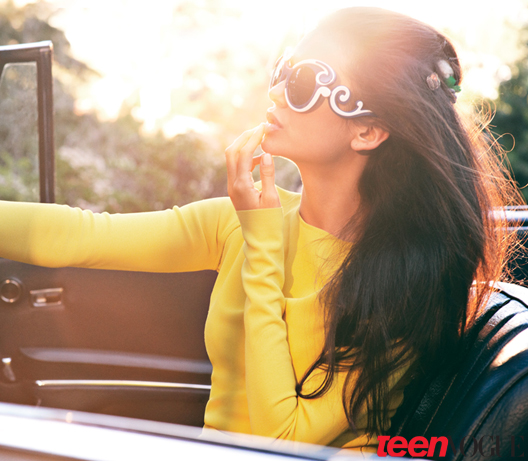 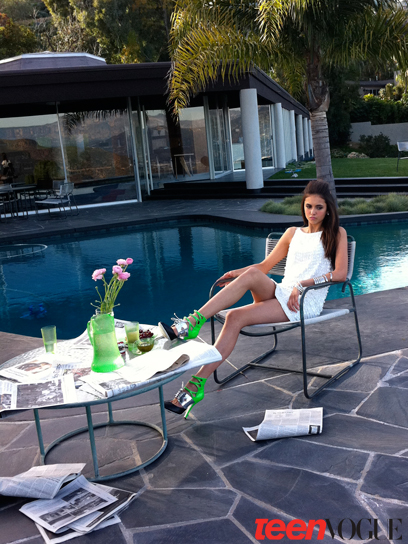 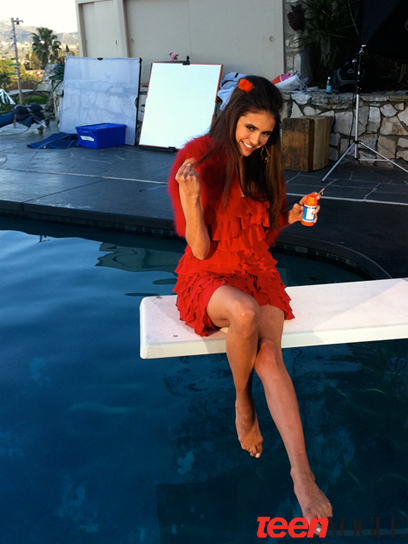 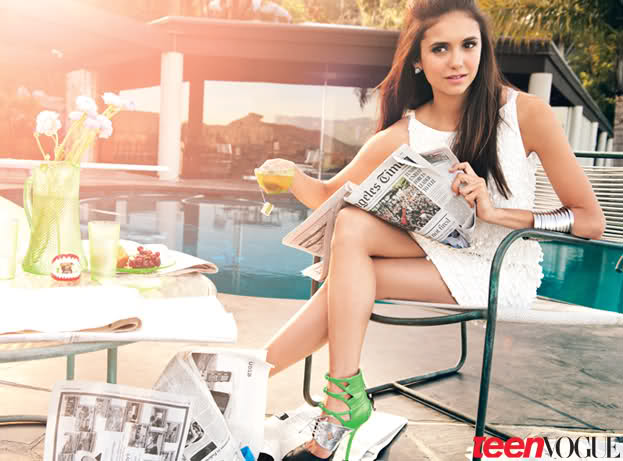 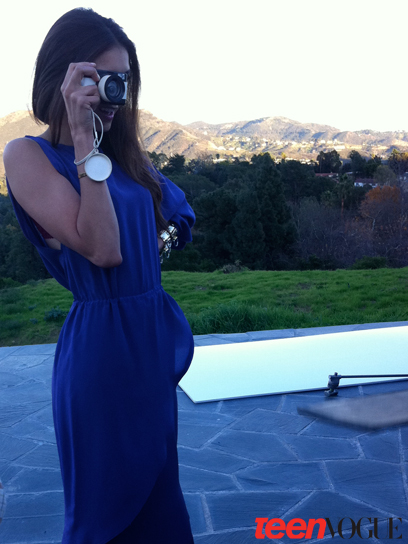 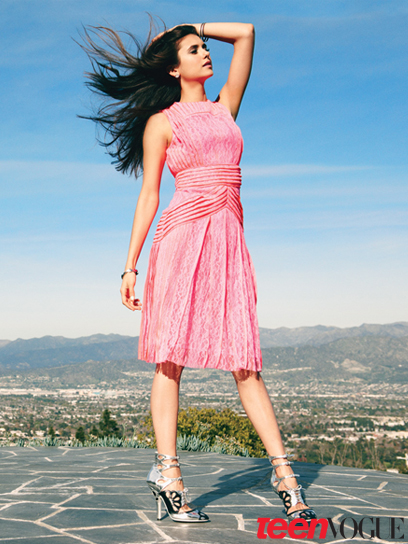 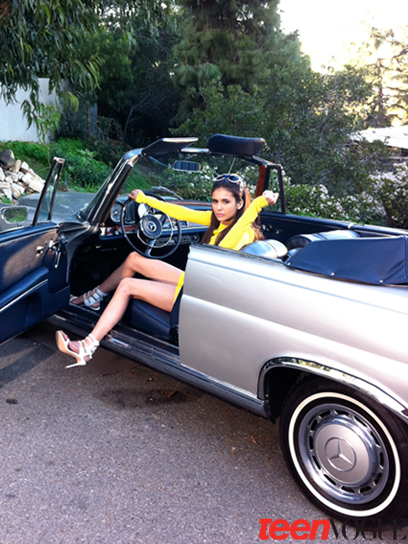 She looks beautiful. I love this photoshoot. I want these outfits.