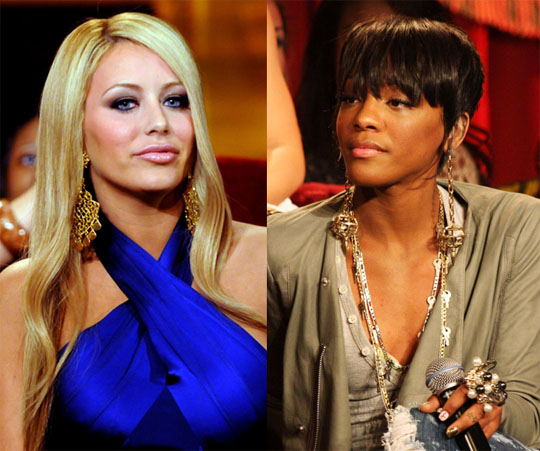 Aubrey O’Day’s world crashed when she was fired on-air by Diddy on MTV’s “Making the Band” in 2008. Now viewers will get to see the next chapter in the wild child’s life as she picks up the pieces and moves on in her new reality series “All About Aubrey,” premiering tonight at 10 p.m. on Oxygen.

The ex-Danity Kane singer chatted with Rap-Up TV about the show and some of the candid moments you will see including recording her solo album, learning choreography, and performing, leading up to a showcase for the major labels. She also reaches out to former Bad Boy boss Diddy for the first time.

While she may have gone solo, the Playboy cover girl still has hopes for a Danity Kane reunion in the future. “Most of us all stay in touch and talk all the time,” she reveals. “I would love to bring it all back and get all the girls back together and have another little Danity Kane moment in life.”

Find out what Aubrey’s been up to in the studio in the next part of our interview, coming later this week.

Dawn Richard has toured the world and sold platinum records as part of Diddy-Dirty Money and Danity Kane, but she’s ready for her moment in the spotlight. The caged songbird is finally spreading her wings and going solo.

Following the release of her mixtape #ATellTaleHeart, Dawn is slated to release her debut solo album on Bad Boy/Interscope Records this fall. “I’ve been incredibly lucky to have been in two amazing groups, but I feel like I’ve never had the opportunity to show the world what I can do on my own,” says the 27-year-old singer-songwriter.

She gave fans a preview of what they can expect with her honest, soul-baring mixtape released on Valentine’s Day. “Prelude to a Tell Tale Heart is the soundtrack to my heart. It’s soulful, it’s raw, it’s real,” she explains.

Dawn is currently putting in work as one-third of Diddy-Dirty Money, with plans to hit the road on the “Coming Home” tour, kicking off April 13 in Minneapolis. In anticipation of the trek around the country, fans can catch Diddy, Dawn, and Kalenna performing on “American Idol” this Thursday.