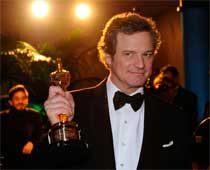 (does anybody have the HQ version of this photo?)
Colin Firth partied hard after his Oscar win for the Best Actor but the 'King's Speech' star almost lost his 8lb golden statuette after he left it in the bathroom.

The actor who won the accolade for his performance as the stuttering King George VI in the British drama, was celebrating the win at a string of swanky champagne soirees but he almost lost the trophy during his trip to the toilet.

Luckily, the cloakroom attendant spotted it on a cistern and chased after the star to hand it back, the Mirror reported.

"Everyone was trying to buy him drinks. He may be 50 but he knows how to party and was determined to make the most of the occasion," an Oscar source said.

The British film eclipsed its big US rival 'The Social Network' to win best picture, director and original screenplay.

After the ceremony, Colin hit the Governor's Ball, a Latin-themed bash where he and wife Livia mingled with Best Actress winner Natalie Portman before heading to Vanity Fair's party.

His final venue was the private Harvey Weinstein bash where the cast and crew of 'The King's Speech' drank cocktails until after 2am. They included Helena Bonham Carter, who lost out on Best Supporting Actress to 'The Fighter's Melissa Leo. 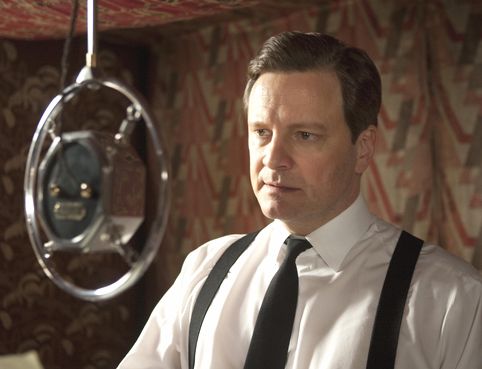 THE KING'S SPEECH continues to bask in Oscars glory, with a huge surge of interest in the film and in all previous titles featuring Best Actor award winner Colin Firth.

The historical drama, which won four Oscars, has experienced a 281 per cent surge in rental pre-orders and is predicted to become the biggest rental title of 2011.

There has also been a big boost for Firth's earlier releases, including a rise of more than 1000 per cent in viewers watching 2008's The Accidental Husband via online streaming.

According to subscription service LOVEFiLM, DVD rentals of Relative Values, a film adaption of the 1950s play, have jumped by 400 per cent, and those for romantic comedy Fever Pitch are up 340 per cent.

LOVEFiLM's Watch Online streaming service has also experienced a boost: The Accidental Husband directed by Griffin Dunne is up by a staggering 1145 per cent and A Single Man based on Christopher Isherwood's novel is up 482 per cent.

Other titles to benefit from the Oscars Effect include Inception, which won Best Cinematography, Sound Editing, Sound Mixing and Visual Effects (up 254 per cent), and The Social Network starring Jesse Eisenberg (up 245 per cent), which claimed the Best Editing, Original Score and Adapted Screenplay awards.

Helen Cowley, Editor of LOVEFiLM, said: "Colin Firth really has become the pride of Britain. He has quite rightly stolen the crown with titles starring Colin being frantically added to rental lists across the nation. The King's Speech is set to be the big rental title of 2011 and will dominate the rental and online charts for months to come."

With The King's Speech still playing in cinemas, it's also set to experience a box office boost while those Oscar-winning titles that have finished their run can expect a rise in DVD and Blu-ray sales.