Every week between now and January 25 when the nominations are announced, movies and stars will help themselves — or sometimes, hurt themselves — in the Oscar race.
For the sixth week (last week's post right here), we continue our coverage of Vulture's Oscar Futures to find out who's up, who's down, and who's currently leading the race for a coveted nomination – now added Foreign Film and Animated Feature. 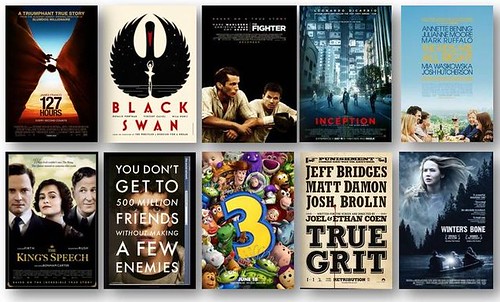 UP: True Grit. It's finally been seen, the embargo has lifted, and reviews seem to indicate it's good enough to snag one of the ten slots that everyone already assumed it would.

Down:Blue Valentine. Winter's Bone and Kids Are All Right's Independent Spirit nods were no surprise — but Valentine's near-shutout kinda was.

UP: Joel and Ethan Coen, True Grit. They're "at the top of their game" or they're working outside of their usual idiom with nice results. Either way, most news is good news.

DOWN: Darren Aronofsky, Black Swan. Swan's reviews are generally good, but his direction has been dinged by some critics who don't like their psychosexual ballet thrillers as over-the-top as Manohla does.

UP: Jeff Bridges, True Grit. Not only is he allegedly better than he was in Crazy Heart, he's better than John Wayne was in 1969's original Grit (which won Wayne an Oscar).

UP: Natalie Portman, Black Swan. With the movie finally in theaters this week, she's predictably everywhere. She "gives the kind of performance that wins awards," says New York's David Edelstein.

DOWN: Jennifer Lawrence, Winter's Bone. Not that the Gotham Awards are any great predictor of anything, but how did she lose for Breakthrough Actor?

UP: Matt Damon, True Grit. He steals the movie!

UP: Hailee Steinfeld, True Grit. She steals the movie!

DOWN: Julianne Moore, The Kids Are All Right. Wouldn't she rather drop down to supporting and win than lose to Natalie Portman in lead? She's kinda running out of time here...

CURRENT PREDICTIONS: The best bets are, "Toy Story 3", and How to Train Your Dragon. The third spot, right now, looks like it belongs to “Tangled, which” made a real impact at the box office. Animators respect “The Illusionist,” but it’s hard to argue with the blanket critical and popular approval of Disney’s gem.

Other Possibilities: The Illusionist, Despicable Me.