Conan has lost the funny with his "new brand": Martyrdom

The comedian’s slide into self-righteousness is anything but funny. 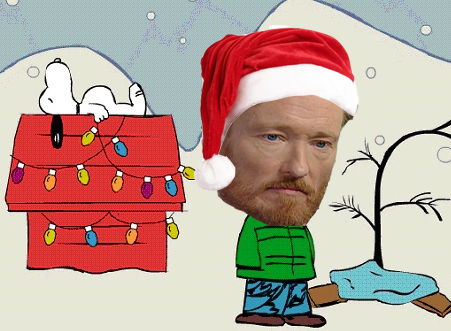 “Welcome to my second annual first show,” said Conan O’Brien in the recent premiere of his new late-night talk show on TBS. Also: “People asked me why I named the show ‘Conan.’ I did it so I’d be harder to replace.” His first episode opened with a video of an unemployed O’Brien being hounded by a haggard wife and 14 kids, then gunned down by Godfather-style NBC hitmen. And, as the weeks progressed, the self-pity has persisted. “I don’t know if you know my story—I worked for a long time in network television,” he said through gritted teeth in a recent sketch.

The show is all about Conan, down to that iconic red coif on the logo. Just over three weeks in, he still peppers his monologue with asides about how “crazy” the last year has been for him. He recently led a roomful of cable technicians in a rowdy cheer: “Who we gonna kill? Network television!” And this fixation on his alleged plight also defined Conan’s act in the months leading up to his TBS debut, following the fracas with NBC that left him—after barely seven months as The Tonight Show’s host—nursing his battered pride and on the market for another gig.

O’Brien’s slide into chronic self-referentiality isn’t new in the comedy world. Most famously, it also plagued comic Lenny Bruce after he was arrested for obscenity at a San Francisco nightclub in 1961. Bruce’s outrage became his only source of material. In his stand-up routines, he quoted at length from his trial transcript. He obsessively detailed the charges against him. His shtick, tinged with real bitterness, was exhausting. And suddenly he wasn’t funny anymore.

Of course, the analogy ends there: Bruce sank further into gloom until he died of a morphine overdose in 1966; O’Brien walked away with a severance package worth more than $30 million and was promptly handed a new show. In O’Brien’s case, it’s been his rise to pop icon status—and the victim complex he’s nurtured along the way—that has made him decidedly less funny.

Last May, O’Brien made his first post-Tonight Show television appearance in an interview with 60 Minutes. He sounded sullen and angry. His new beard seemed to suggest he was a castaway back from a few rough months on a desert island. “I went through some stuff,” he said. “I got very depressed at times.” Thus emerged the new “Conan” brand, one built on O’Brien’s supposed martyrdom—a patently offensive idea in light of his massive payoff and our nearly 10 percent unemployment rate. “I’m with Coco” T-shirts and Facebook profile photos abounded. O’Brien made YouTube videos answering questions from viewers and racked up almost two million Twitter followers.

During his brief hiatus from television, O’Brien performed around the country in the “Legally Prohibited from Being Funny on Television” tour. In his routine, he outlined the “stages of mourning” for former late-night talk show hosts and strummed along to lyrics such as “They threw me out/It happened fast/They said ‘Please don’t let the door/Hit your freckled Irish ass.’” It all seemed less like a comedy routine than a therapy session for both O’Brien and his supporters—a chance for him to freely indulge his bruised ego. The fans who flocked to these live performances were young, Web-savvy, and, like O’Brien, riled up by a sense of gross injustice.

On TBS’s “Conan,” martyrdom is still the brand. The show feels like a nightly kick in the groin to NBC. But the host also slaps at his new network. In his Thanksgiving show, he said, “I’m happy to be on cable now, it’s not a problem,” then slipped a flask out of his coat and took a long swig. “I don’t know if you remember, but, on my old network, that I worked at for a long time, we had NBC chimes,” he said in another recent episode, before launching into an adolescent joke about TBS’s decision to coin its own audio trademark: a loud bodily noise whenever someone says the network’s name.

The TBS putdowns are in poor taste. When O’Brien riffs on his diminished paycheck or the lowbrow nature of basic cable, it’s uncomfortable to watch him. This doesn’t jive with the spirit of the late-night talk show, which aims to make viewers feel privy to a cozy, casual chat. Johnny Carson excelled at the business of putting his guests—and thus his viewers—at ease. His jokes were chummy and he never stole the spotlight. Even Jay Leno built his brand on providing a kind of backdrop for flashier personalities. It might not be fun to watch Leno, but it is comfortable. His style is unobtrusive. O’Brien, sitting beside a celebrity guest, is a competing spectacle.

Granted, in the past, O’Brien’s antics have worked to his advantage. His creativity, wit, and goofball charm made Late Night likeable and consistently fresh. His self-deprecation had less desperation. But the new Conan is a different kind of act: too convinced of the urgency of his own plight.

On “Conan,” even his guests participate in ribbing him. Ricky Gervais filmed a segment preemptively congratulating Conan on future gigs with “The Food Network” and “Good Morning Dayton.” Then Tom Hanks—accused of coining the nickname “Coco”—said, “Finally [Conan] will blame something on someone other than Jay.” Often the mood is congratulatory: “Wow,” Eva Mendes told O’Brien earnestly last week, “this is so much better than your last gig.” In any case, it all seems engineered to remind us that the NBC saga is the bedrock on which “Conan” was built.

The media are in part to blame for the new Conan and the self-righteous fervor of his fans. They tracked the whole Conan versus Leno mess as if it were of international interest and characterized the fallout in Homeric terms. The Times headlines charted it obsessively: “Agreement Expected in NBC’s Talks With O’Brien,” “NBC wants Leno back in old slot,” “O’Brien Rejects NBC Shift: He’s Set to Say Good Night.” High drama was wrung from the timeline of late-night TV programming: NBC’s proposal to move The Tonight Show from 11:35 to 12:05, Conan galled by the prospect of a post-midnight Tonight Show, Leno reinstated at 11:35.

This whole preoccupation with scheduling felt mostly symbolic. DVR, Hulu, and YouTube have done away with the singular importance of the time slot. We can handpick clips to watch online and reshuffle programming to suit our own schedules by pressing “record.” And there is no longer much of a place for the generalized subject matter and stock formula of the late-night talk show—the monologue, interviews with movie stars who have a new project to hawk, a few interspersed sketches. Modern attention spans are too slim to accommodate bald self-promotion from celebrities and too readily able to seek customized entertainment elsewhere. Now, niche-iness is key, which is why Jon Stewart and Stephen Colbert are so popular. They are emphatically topical; Leno and Letterman, when it comes to shaping the national conversation, tend to be beside the point.

With these odds against him, Conan has still managed to climb to new, iconic heights. He became the spiritual leader of a hollow movement in which a breached NBC contract was a moral cause. Like Jon Stewart’s “Rally to Restore Sanity and/or Fear,” “I’m with Coco” was a pseudo-movement pitching itself as an attempt to rise above the fray and offer something nobler, more in touch with the people. And, like the Stewart rally, it was less a demonstration of any real principle than a publicity stunt. Now, the ethos behind TBS’s “Conan” is the same: comedy uncomfortably mingled with a sense of real aggrievement.

Today, pseudo-movements are easy to assemble; a cult of personality can be cobbled together from some YouTube clips and a Twitter feed. Influence is more about visibility than ideology, and so entertainment and politics have become weirdly conflated. Stewart’s rally was good fun when he and Colbert were strutting around in American flag sweaters and belting off-key duets. It lost its punch at Stewart’s earnest closing speech: “Sanity will always be and has always been in the eye of the beholder. To see you here today, and the kind of people that you are, has restored mine.” His ambitions of real moral leadership killed the comedy act. And the comedy act killed his ambitions of real moral leadership. For O’Brien, too, self-righteousness undermined the act. The cloud of self-reference surrounding him became tiresome fast.

Lenny Bruce, at least, stood for something: He was a first-amendment crusader, dangerously profane and pushing real boundaries. O’Brien is a martyr without a cause. “I don’t want what happened in January to define me,” he told Playboy in a recent interview. “I’m trying to take the high road.” He would be wise to take his own advice.