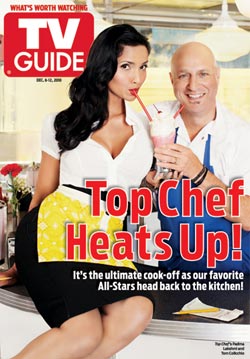 TV Guide is denying accusations made yesterday by PopEater that a cover image of 'Top Chef' host Padma Lakshmi was manipulated to lighten her skin tone.
In a statement issued by TV Guide, the magazine's editorial team said, "If her skin appears lighter, it's because we shot her in a brightly lit diner as part of the cover concept. We did our normal color correcting, which is standard for printing."

"Padma's skin tone is beautiful, and we did nothing to adjust it," they continued.

Lakshmi took to Twitter to dispel any controversy surrounding the cover. "Many thx to TVGuide for a great and gorgeous cover. Delightful team, and a really fun and easy shoot," she wrote.