First Commercial for Oprah's OWN! 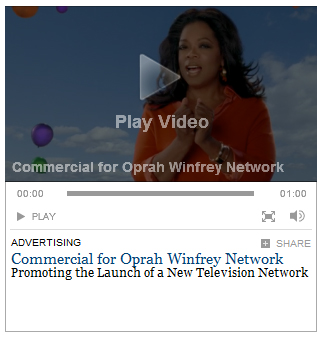 IN a one-minute ad that starts Friday in movie theaters across the country, the voice of the Black Eyed Peas frontman will.i.am calls out to dreamers, believers and “tomorrow leaders.”

Then, looking positively radiant, Oprah Winfrey looks at her audience and asks: “What if I could take every hero who inspired me; every lesson that motivated me; every opportunity that was ever given to me; and give it to you?”

This is the first big-budget promo for OWN: The Oprah Winfrey Network, the cable channel from Ms. Winfrey and Discovery Communications. The channel, nearly three years in the making, is only one month away from its debut. “Now, here we are,” Ms. Winfrey says in the ad. “This is our day. This is our moment.” To — to what? In the background, will.i.am is still singing:

Aside from the fact that will.i.am dreamed up a song specifically for OWN, the channel is being introduced to the country in a relatively low-key way, with the cinema ad and some Web ads that started appearing earlier this week.

“Our Phase 1, which is what we’re doing right now, is, ‘What is OWN? Where is OWN? When is OWN?,’ ” Darren Schillace, the channel’s vice president of consumer marketing, said Thursday in an interview.