Stepping out for a screening of her new movie, Nicole Kidman was joined by husband Keith Urban at the premiere of "Rabbit Hole" in New York City on Thursday night (December 2).

Held at Paris Theater, the gorgeous couple were both all dressed up as they headed inside to join up with actor Aaron Eckhart for the event ahead of the film's scheduled December 17th release date.

During recent press duties, Miss Kidman took a moment to give her single co-star quite the kind endorsement to all the ladies out there.

She said, "He'll make someone a great husband. Which is actually what Aaron is: a really decent guy with an enormous amount of love to give. So for all those women out there, he's looking for a wife. He's a really good husband."

Asked his thoughts on Nicole's comments, Aaron replied, "From your lips to God's ears. I need a good woman!"
Kween going to and from gma yesterday: 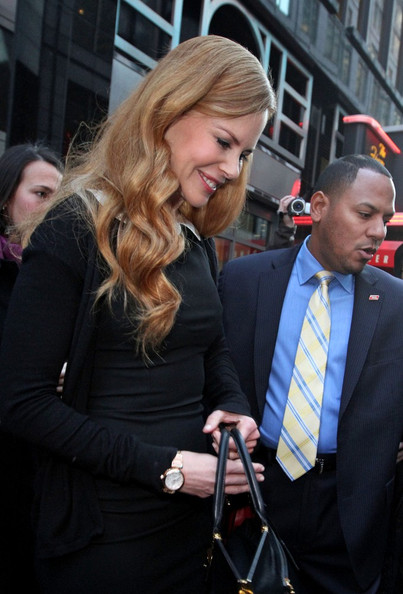 "The journey that Nicole Kidman took me on in 'Rabbit Hole' started with very subtle and odd behavior. I didn't know anything about her story, but right away, the very first time I saw her I felt deeply for her character Becca.

Becca is so far and yet so close at the same time. The space that is created between her and the audience is simultaneously delicate, strong, violent and full of life. A part of her is gone and will always be gone, yet you feel nothing but life.

Even though this sense of life doesn't know how and where to hang on inside her soul, it is vibrant nonetheless. Nicole created her character's journey like a meditation. When Becca doesn't protect herself and instead jumps into her pain, not fighting against it but surrendering to it, she takes us with her towards light. I felt what she felt. I cried with her. I understood every fragment of her inner disaster and the way she survived. Nicole is at the same time a rough and a cut diamond. She has a very simple and direct way to enter your heart. She shares her emotion in the most generous way. She is simply one of the world's best actresses." [variety]