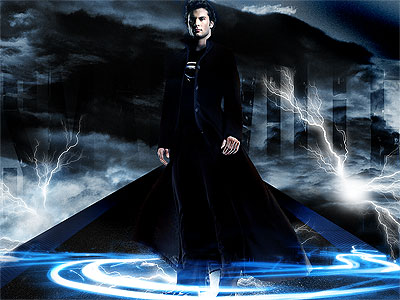 Tom Welling Feels Super About Season 9
by Rich Sands September 08, 2009 03:48 PM EST
At July’s Comic-Con, Smallville star Tom Welling made his first appearance at the gargantuan sci-fi and pop-culture extravaganza, sending a packed room of 2,000-plus fans into a frenzy. (An action-packed sizzle reel that included shots of Clark in a new all-black uniform that includes the Superman shield also go the crowd buzzing.) During the audience Q&A portion, a soft-spoken young woman stepped up to the microphone and requested Welling’s answer be “kinda long, so you can keep looking at me.” Luckily for that fan, and the loyal base who still watch the series, there will be at least one more season of face time for Welling. Already TV’s most prolific Superman, the 32-year-old actor agreed last winter to sign on for this year’s ninth season (and a potential 10th) after addressing his main concern (one shared by many fans): How, after eight years, do you keep telling stories about Clark Kent before he dons the red-and-blue tights of the Man of Steel? “At a certain point, we all know where it’s going to go,” Welling told TV Guide Magazine moments after the Comic-Con panel in a makeshift green room at the San Diego Convention Center. “And even last year, the question about halfway through the year was, ‘What is stopping him from putting on the cape?’…Once that took its form, then the decision wasn’t so difficult.” Here Welling shares his feelings on coming back, his role as a producer this season, and putting on the Superman shield for the first time.

You’ve added producing duties this year. How does that change your role on the show?
When I started Smallville obviously I hadn’t done much acting. My goal was to learn everything I could. And along that road I just needed to learn everything about everything and then use that to make the show better.… There’s no bitterness or dark side when I say this, but I think I’ve been contributing as a producer for more than a few years. [Welling has directed several episodes of the series.] The title is the title, nothing changes for us in production. I don’t know if much has changed as what I bring to the table, but I do know that now I have [more] access… I’ve always tried to be open and collaborative and make the show better. I guess in the end one thing that has really changed is that there’s a lot more paperwork that comes to me! Now I literally have a stack of memos like this at the end of every day.

How did you come to the decision to sign on for Season 9, and potentially Season 10?
Well when they brought it up, the first thing I said was, ‘What’s the story gonna be?’ And no one was really sure [at that point], and that’s why it took a little while to figure out, because I really didn’t want to engage in anåything until I knew what I was gonna get myself into. So that took a lot of discussion and meetings between myself and [Warner Bros. Television president] Peter Roth and [executive producers] Kelly [Souders] and Brian [Peterson] about what next season was going to be. Once that took its form then the decision wasn’t so difficult. We have a great group, and I love everybody that’s a part of it. Their ideas made sense to me. What I don’t want to do, and what nobody ever wants for the show they’re on, is for it to dwindle out and lose its credibility. And I think this season, if anything, we’ve re-energized it.

Talk about that. I gather Clark will be in a pretty dark place. What is his journey for Season 9?
Well, in the past Clark has always been the reluctant hero. Everyone is telling him what he has to do and he doesn’t want to do it. With the events of Jimmy’s death [in May’s season finale], along with the eight seasons building up, he realizes that his view on humanity has been wrong. And he goes to Jor-El and says, ‘I messed up, what do I do now?’ Jor-El takes him in, and Clark starts his training. His training ultimately is what will prepare him to be who we all know he’s going to be in the future. So it’s him spending time at the Fortress of Solitude downloading all this information. At the same time, information is given to him that the fate of the world depends on Lois Lane’s survival. So Clark has to struggle between his destiny and his humanity. Especially in the first few episodes it gets in the way of the training, because he just can’t help but deal with humans and help people, when all Jor-El wants him to do is shut everyone off, forget about them, rise above them and be the hero he needs to be.

You mean he feels like there’s only so much he can do?
Right. Not only is there only so much he can do, but what he’s been doing was wrong, and he needs to go and change directions. There’s a lot of isolation. But then of course, there’s the struggle and the drama pulling him back into these relationships.

What’s his relationship going to be with Chloe as she takes on the role of Watchtower?
That’s an interesting one, because even on set, scene by scene, we’re not sure what it is. Allison [Mack] is a tremendous actor. On set, in a very collaborative and positive way, there’s this sense of distance between Chloe and Clark. They’re both changed people. They’re not the Chloe and Clark who used to run around the Torch [in the first few seasons of the show]. They’ve both grown up and they both have better ideas about what they want to do with their lives. And they’re trying to figure out what their relationship is. But right now it’s rough seas.

Clark’s big enemy this season will be Zod, but he's not the Zod we met a few years ago. Who is he when we first see him this season?
He’s trying to figure out why he’s here and who these people are with him. He’s not the only Kryptonian on Earth. There’s a whole gamut of them who will be making appearances throughout the season. It could be that he’ll find himself fighting some of them. I think this season will be about Zod searching for his destiny and why he’s here. I don’t think he’s necessarily evil off the top, I just think he’s got his own agenda, which he’s trying to figure out. And I don’t think he likes being on Earth too much.

I understand there’s going to be a love triangle between Clark, Lois an the Red Blue Blur.
There was a [production] meeting last year that I walked in on and the conversation was about how much Clark was in love with Lois. I sat there and I said, ‘Wait a minute, Clark’s in love with Lois? When did this happen?’ I said Clark doesn’t know he has feelings for her. If he does and people see it, that’s one thing, but he doesn’t know.’ … So last year Clark wasn’t necessarily aware of these feelings. There was something, there was a reason why he found himself next to Lois. And this year, that’s what’s beginning to change, he’s starting to realize he has feelings for her. But at the same time, to protect her life he feels as though he has hide the fact that he’s the Blur, and that it’s safer for her not to know that he’s the Blur.

Sounds like he’s going to be torturing himself.
Again, another year of torture for Clark.

In the clip reel we just saw Clark is wearing a dark outfit with the Superman symbol on his chest. What’s that all about?
That is the symbol of the House of El. I’ve gotten away for many years with the blue t-shirt and the red jacket. Very easy wardrobe for me, very simple, straightforward, very comfortable. This new wardrobe, the leather jacket is a little warmer, you have to learn how to not step on your jacket when you’re in a fight sequence. You learn that pretty quick—it doesn’t take many times before you figure that out! Anyway, he’s trying to establish a call sign for himself. Even though Clark isn’t putting his own face out there it’s his way of taking accountability for what he’s doing.

Will that symbol become known as the symbol of the Red Blue Blur?
Yeah. This year he’ll be known as the Blur. And there’s a circumstance in the second episode where he’s almost caught by Lois. And through some very interesting lighting we see the symbol, but we don’t see Clark’s face. And it’s a perfect moment for him to step forward and say, “Lois, it’s me,” but he doesn’t. Poor Lois. Because that’s all she really wants to know.

What was it like putting that costume on and having that S on your chest?
The thing is, it’s a show going into Season 9. We’ve covered a lot of ground. When we first started talking about [this season] my first thought was apprehension. At the beginning the show was ‘Before Superman,’ Clark Kent’s origins, and how he got to that point [of becoming Superman]. Now you can definitely see that it’s a new era for the show. People say, ‘Season 9? It’s been so long.’ It has, but at the same time every year is the only year, every year is a new show. Especially this year. We look at posters up in the office of Season 1, 2 and 3 and we were kids, literally. Looking back it’s like a whole other world. But that’s the way it’s always been on our show. And standing on set wearing a black shirt, with silver S, black leather coat, black jeans, black boots, and thinking about last year, it’s night and day.

The ninth season premiere of Smallville airs Friday, September 25, 8/7c, on The CW.