The ruling does not guarantee that Novak Djokovic will be able to compete at the Australian Open. The government warned that it may cancel his visa a second time even after the court’s decision. https://t.co/t7X3MDVqzZ

The government's decision to cancel his visa has been voided or declared invalid.

The government must pay Djokovic's costs as agreed or assessed.

The government must "take all necessary steps" to immediately release Djokovic from detention, which must happen no more than 30 minutes after the decision was made.

Djokovic's passport and all other personal effects must be returned to him.

After announcing his decision, Judge Anthony Kelly explained that Djokovic had not been given sufficient notice of his visa cancelation, or enough time by the government to prepare materials.

The soundtrack to the Walt Disney animated musical film "Encanto" surges to No. 1 on the Billboard 200 albums chart. https://t.co/uYEo8PjgWh

OPM (Original Pinoy Music) refers to a genre of music from the Philippines. To qualify, the song must be originally released in PH and produced and performed by Filipino singers who primarily reside and promote in PH. (So as proud as Filipinos are with Olivia Rodrigo's 2021 success, she will not count here.) Only songs released in 2021 will be featured in this review, with reference to the artist's past works.

1. BREAK OUT ARTIST OF THE YEAR: ZACK TABUDLO
2021 was an epic year for the former The Voice Kids PH contestant, who at 19, broke the Spotify PH chart record with his song "Binibini" (Young Lady). The song was featured in the evening gown competition of Binibining Pilipinas (Miss Philippines). His other release, "Habang Buhay" (Forever) is trending as a dance on Tiktok. With a strong Gen Z following, Tabudlo paves the way for a new generation of OPM lovers. (Fun fact: his music videos feature real life celeb couples)


( Collapse )
Disclaimer: These are my personal picks but you are welcome to post your own recommendations of your OPM faves in the comments, let's spread the love of OPM!

This week on the US Daytime Soaps...

Loved the trial scenes a few weeks back. I enjoyed Michael’s plan blow up in his face. What is up with Michael lately though? He’s been a shit character for years but it’s like they’re not even trying to make him seem likeable (though I think the writers assume we’ll be rooting for him by default?) From his scenes in the courthouse after Willow’s testimony to his scenes with Willow and Harmony the other day, Michael is seeming more and more like a controlling, abusive asshole. He’s officially worse than Peter in my eyes now. At least I know we’re not supposed to be rooting for him.

Speaking of…why is Peter still alive? Speculation online seems to be favoring a murder mystery surrounding Peter. Whatever. Just off the motherfucker.

Loved seeing Tracy back! Loved that she figured out the Baily/Louise switch in almost no time.

As for Luke being dead. I’m not fully convinced he’s dead with Victor apparently being behind it and with Holly also still being presumed dead and kept prisoner somewhere. There’s no way in Hell Tony Geary is ever coming back (not that I’d ever want to see Luke again). I hope the character is dead but killing him off-screen and hypothetically reviving him off-screen seems hella pointless.

GH Spoilers for the Week

I’ve seen some people talk about wanting a EJ x Belle pairing, since if Sami’s never returning full-time, the show needs a full-time pairing for EJ but I don’t like that idea for either Belle or EJ.

DOOL Spoilers for the Week

The Young and the Restless

The Bold and the Beautiful

*Eyeroll* Steffy wanting her parents back together feels like it’s more about “winning” over the Logans than it is about wanting what is best for her parents. Sort of like how it felt like Brooke & Taylor’s involvement with their daughters’ relationships with Liam was more of a proxy war against their romantic rival than anything else.

I wasn't a fan of how lazily they handled Brooke's initial "alcoholism" story however many years ago and I'm not necessarily thrilled at how they're revisiting it now.

B&B Spoilers for the Week

This Week in Soaps history...

THE 25 BEST FILMS OF 2021: A Video Countdown from david ehrlich on Vimeo.

Film critic David Ehrlich cut together his favorite 25 films of the past 12 months into a video countdown. He's been doing this every year since 2012, and you can actually watch them all on this website if you want.

Bob Saget's Family Is 'Devastated' About Full House Actor's Death: 'He Was Everything to Us' https://t.co/yPq13RAIVl

Following his sudden death at 65, Bob Saget's family has released a statement. It says:

"We are devastated to confirm that our beloved Bob passed away today. He was everything to us and we want you to know how much he loved his fans, performing live and bringing people from all walks of life together with laughter.

Though we ask for privacy at this time, we invite you to join us in remembering the love and laughter that Bob brought to the world."

Social media has been flooded with tributes by Bob's friends, colleagues and fans. Most noted his kindness above all else.

And Jon Lovitz continues to uphold some decency:

You couldn’t fucking wait to get this out, before you make sure his family knows, you pieces of shit? https://t.co/yC161i5Jw9 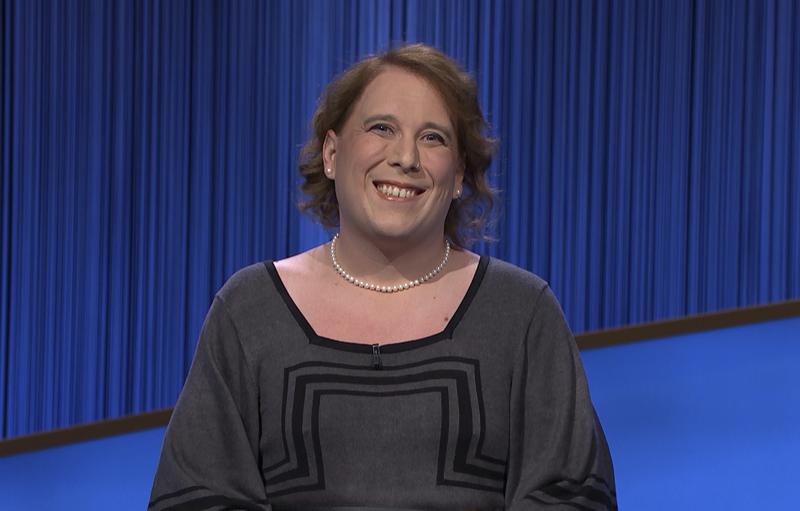 Amy Schneider, an engineering manager from Oakland, CA, has been constantly breaking records on Jeopardy. Just months ago, she became the first openly trans contestant to qualify for Jeopardy's Tournament of Champions, as well as the show's highest-earning female contestant in its history.

On her 28th appearance on the show on January 7, Schneider broke another record: she accrued over a million dollars in winnings, making her the 4th contestant ever to do so over a regular season and her winning bounty the 4th largest in the show's history after Ken Jennings, James Holzhauer and Matt Amodio.

With $1,019,600 in all-time winnings, Amy Schneider has joined a very exclusive club among Jeopardy! champions! pic.twitter.com/S1v9IF3gLE

In an interview with the Associated Press, Schneider cites Laverne Cox and Natasha Muse as her inspirations, and is proud of a podcast that she did on Downton Abbey. Her greatest asset as a contestant is her strength in the Final Jeopardy round, which she has only missed 3 times out of 28 so far.

You can watch some of Schneider's highlights below:

The real housewives mastermind shared that even though he and journalist, Anderson Cooper, are inseparable, single and have great chemistry with each other, Cohen would not date him, adding that they’re just friends and that their friendship has become so strong through the years, that attraction is no longer on the table.

He acknowledges that Cooper is a handsome guy and reveals that they actually were to met each other firstly on a blind date set up by friends in the 90’s, but during a phone call leading to that date, Cohen committed a faux pas, that is a deal breaker for Cooper, he asked about his mother, late heiress, socialite, fashion icon and designer, Gloria Vanderbilt, immediately discarding Cohen as a romantic partner; however they remained in touch and with the passing of the years, became good friends, with the pair’s bond strengthening when each became fathers.

Zendaya issued a content reminder for fans hours ahead of Euphoria's long-awaited season two premiere. She said in part:

"I do want to reiterate to everyone that Euphoria is for mature audiences...Please only watch it if you feel comfortable...either way you are still loved and I can still feel your support."

She issued a similar warning in 2019 before the first season premiere.

Robert Durst, who was convicted for the murder of his friend Susan Berman and was the subject of HBO docuseries #TheJinx, has died in prison at 78. https://t.co/cKYRfxBIn8 pic.twitter.com/IriiyUlKke

Convicted murderer, real estate empire heir and creep Robert Durst is dead. He died from cardiac arrest while serving a life sentence in prison at the age of 78. Durst was convicted of the 2000 murder of Susan Berman was suspected of two more murders (including the disappearance of his first wife). He was the subject of the 2015 HBO documentary The Jinx which famously ends with audio of Durst in the washroom confessing to the murders with no one realizing his mic was still on. The documentary brought renewed interest in the case which eventually led to Durst's arrest and conviction.

The video in question is under the cut After wiping their social media accounts and keeping a low profile from music since about 2019, the two DJ dudebros of EDM (The Chainsmokers: comprising of Alexander “Alex” Pall and Andrew “Drew” Taggart) are plotting their return to music in 2022 and we have to ask, why? The duo, best known for their no. 1 hit "Closer" with Halsey, who had that infamous Rolling Stone interview, had a weird feud with Gaga, and told Billboard both of their penises combined measure 17.34 inches "tip to tip", teased clips on Instagram.

We survived the first night, now we can get to the dating.

Synopsis: Set in modern-day America, Peacock’s new one-hour drama series Bel-Air reimagines the beloved sitcom The Fresh Prince of Bel-Air through a new, dramatic take on Will’s complicated journey from the streets of West Philadelphia to the gated mansions of Bel-Air. As these two worlds collide, Will reckons with the power of second chances while navigating the conflicts, emotions, and biases of a world far different from the only one he’s ever known.

Darlings, the only constant our millenial lives is staying on tv for ONE MORE SEASON!

✨It's a beautiful day to receive some big news.✨ #GreysAnatomy will be back on Feb 24 and for a whole new season! Congrats on Season 19 🎉 pic.twitter.com/ZZn10dlGBJ

Grey's Anatomy got early renewal for season 19. Yes 19. We'll never be free and this OP is rather pleased about it

ONTD, will you munnifest Owen's departure?

Emily in Paris has been renewed for Season 3 — and Season 4! 🍾 pic.twitter.com/3zqj36vmnO

Netflix has renewed Emily in Paris for not one but TWO more seasons.

Katy Perry is still kicking. She has a new music video with Alesso for their song "When I'm Gone." It premiered tonight during the College Football Playoff National Championship. The choreo is giving Hilary Duff with more energy, but I don't hate it. It's a fine-ish video for a fine-ish song for a fine-ish pop star.

She is also trending above the CFP National Championship. Katy returns to prime time with American Idol on ABC this week.

once again Katy Perry has stolen the spotlight and outsold the game just like 2015 😭 pic.twitter.com/mxKLlNhmEx

When a ruptured water main creates an enormous sinkhole right in front of Bob’s Burgers, it blocks the entrance indefinitely and ruins the Belchers’ plans for a successful summer. While Bob and Linda struggle to keep the business afloat, the kids try to solve a mystery that could save their family’s restaurant. As the dangers mount, these underdogs help each other find hope and fight to get back behind the counter, where they belong.