Sebastian Stan and Jessica Chastain got together to play never have I ever the ~355 challenge, where they had to put a finger down if:

The two actors are starring together in the new action film titled, you guessed it, 355.

Instagram user @laguna_biotch has pointed out that the Kimpete vacation to the Bahamas might have been a sham! *Gasps and thinks of the children!*

1. It seems kind of suspicious that they arrived in the Bahamas on one day and returned to the States in the EXACT SAME OUTFITS. Here is their arrival post and the below tweet shows their return.

2. The real damning evidence here? Kim's "beach pic" features a magazine by her side. The magazine in question? None other than the April 2021 Vanity Fair with Anya Taylor-Joy on the cover. 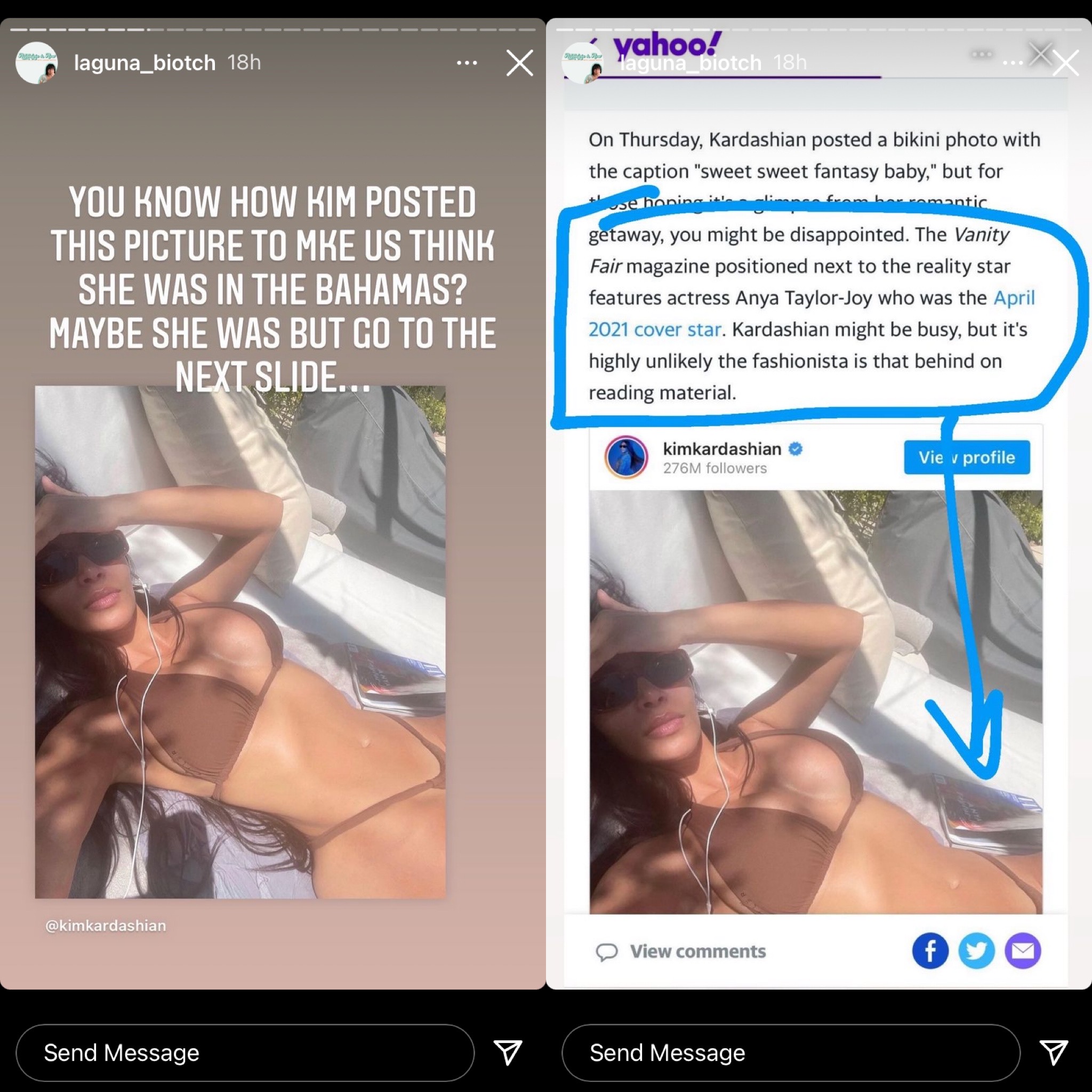 Okay, so what can we conclude here? Maybe lots of couples wear the exact same clothes coming and going from vacation. Maybe they read 8-month-old magazines, too. Or maybe it's the classic "those Kardashians always post old pics to make you think it's present day" trope. 🕵️‍♀️

Apologies to people sick of these updates.

"Djokovic received a letter from Australia’s immigration department days before his arrival saying he met the requirements for quarantine-free travel."

- Djokovic was detained after attempting to enter Australia unvaccinated
- He was understood to have thought he had a medical exemption after having had covid in the last 6 months
- Documents released show he was said to have tested positive on the 16th December 2021
- Djokovic was photographed on 14th December with Nigel Hayes-Davis who later confirmed he had tested positive
- Djokovic's appeal will be livestreamed at 10am on Monday Australian time
- The Age was told by Djokovic's team that "Djokovic would be relying on basic principles of administrative law, and that he was treated without procedural fairness by border officials"
- Tennis journalists were quick to point out several questions arising from this
++ 16th December was after Tennis Australia documents said you could apply for exemption (10th December)
++ Djokovic claims to have applied for his visa in November
++ On the 17th and 25th of December, Djokovic was seen out at public events unmasked
++ Djokovic's legal team claim Home Affairs told him he met the requirements for the exemption on 1st January

There is some confusion as to whether he was alerted to being positive on the 16th or he took the test on the 16th.

Yola "Dancing away in tears"

- First there was Framing Britney Spears, now the documentary Janet: Justin T. and his team seem to finally listen to what the people want;

- "Sources" tell The Sun that there's a lot of music ready, but it won't come out any time soon because they worry about bad sales numbers because all of the bad rep;

- All this while Justin apologised last February to both women. Someone please get a tiny violin.


ONTD, hope you enjoy your weekend!

On the Actor #THRRoundtable, Nicolas Cage tells a story about a horse named Rain Man who hated and attacked him pic.twitter.com/BmYaG3kDrM


-The Hollywood Reporter had their Actors Roundtable and the story of a vengeful horse named Rain man made its rounds on Twitter.

-Nicolas Cage("Pig") says the horse tried to headbutt him and throw him off his back as fellow actors Andrew Garfield (" Tick Tick Boom") dissolved in giggles.Jonathan Majors( "The Harder They Fall") spoke of his connection to Rain Man to Cage's astonishment.

-Leto is vying for supporting while the others are lead.

Perhaps I just do not get the photographer's artistic vision.

these pictures of weird, right?

Delighted to share a new portrait of The Duchess ahead of her 40th birthday tomorrow.

This is one of three new portraits which will enter the permanent collection of the @NPGLondon, of which The Duchess is Patron.

— The Duke and Duchess of Cambridge (@KensingtonRoyal) January 8, 2022

What exactly is the vibe the photographer was going for her? Because to me it's like... a 1920s socialite dressing up as some kind of classical figure for a fancy dress party or something. Or like some kind of silent film star?

Sorry for being so mean, Kate. Uh, hope you have a happy birthday? 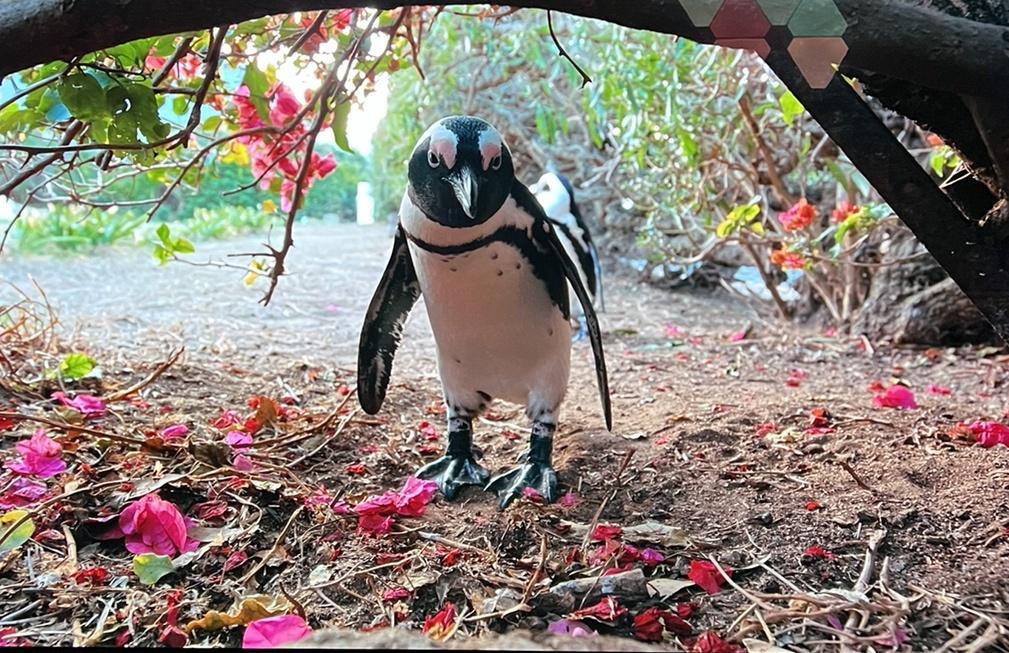 So in honour of our emptying queue, I did not finish any of the posts I meant to and instead watched the first episode of penguins arriving in Simon’s Town, South Africa for their annual spring break.

Drive My Car has been named the Best Film of 2021 by the National Society of Film Critics. The film dominated, also winning Director, Actor, and Screenplay. It joins the New York and Los Angeles critics group as naming the drama the best film of the year. It was the first time a film has won with all 3 major critics groups since The Social Network back in 2010.

The full list is below, including those who were named runner-up:

Most comic book movies don't get the award love it's supposed. Though in the past a couple of performances got Oscars (The Joker off the top of my head). So this list (5 for this post) will be performances overlooked during awards season. I know many will have opinions on if these performances should be on the list so I can't wait to read the comments.
(FYI: This is not an ONTD Original. This list is not MINE)

Downey has played Iron Man, aka Tony Stark, so many times, you might have a different movie in mind for him. For example, he definitely could have plausibly gotten a nomination for “Avengers: Endgame.” However, we’re out here supporting his original turn in the movie that spawned the Marvel Cinematic Universe: “Iron Man.” Downey had to introduce a character and a world, and he did in a way that was in equal parts, funny, captivating, aggravating and dynamic.

What performance do you think should've got some awards love?
source

The Hills ' Kaitlynn Carter took to Instagram to blast the 'shocking' criticism she received over her revealing New Year's Eve outfit.

She spoke out after trolls deemed her outfit - a plunging YSL jumpsuit - inappropriate for a mother to wear.

Kaitlynn said about the judgement, 'It's very sad to me that that's the world we're living in'
source


As usual, we'll be using Teleparty to watch together. The movie will start around 9pm EST. The link to the party will go up around then.

A Scott Pilgrim anime is reportedly under development for Netflix, with creator Bryan Lee O'Malley attached as co-showrunner. https://t.co/TNJSjEkEHA pic.twitter.com/pzWpwjJyK8

Netflix and UCP, the division of Universal Studio Group behind The Umbrella Academy and Chucky, are developing the brand-new adaptation, which does not yet have a series order.

Bryan Lee O’Malley, Pilgrim’s artist-creator, is writing and executive producing with BenDavid Grabinski, the showrunner behind the revival of Are You Afraid of the Dark? at Nickelodeon. The two will showrun the series if the series is greenlit, with anime house Science SARU on tap to provide the animation work.

26 year old Ireland Baldwin posted on instagram that she lives in constant fear that she is having a heart attack due to her anxiety disorder. She says that her personal blood pressure and heart rate monitor helps to reassure her. She says her anxiety has gotten so bad that she has called ambulances before. She also says she doesn't believe in medication... but she understands that some people need it.

Do you suffer from anxiety, ONTD?

A new report claims that Demi Lovato is back home after completing another stint in rehab https://t.co/i6qFkebnaK

29 year old Demi Lovato allegedly returned home from a recent rehab stay in Utah. They are said to be doing well.

(According to the OP)
Happy New Year K-ONTD!
Last year although it was a bit underwhelming for Kpop, we still got some pretty cool music.
So here's another year of the Best Kpop songs of 2021!

Criteria:
-Only tracks with official music videos.
-Only one song per group (Including sub-units & solo releases....to have more variety)
So, for example: If Hoshi is in this list (which he is) that means that Seventeen cannot be included but the exception could be that GOT(Girls on Top) and Aespa could be here (even though they share Winter/Karina, because they are two different groups), with that said, sorry if anyone gets offended or butt hurt (Disclaimer I'm a girl group stan).
Here's the list from
2018
2019
2020
With that said.. LET'S START!

Boy group Epex (which I discovered last year) delivers a solid bubble gum melody in "Do 4 Me" with a repetitive and infectious chorus they demonstrate that they have good chops to shine in the pool of infinite boy groups. Also, the cat theme is pretty cute.

‘I Know What You Did Last Summer’ Canceled By Prime Video After One Season https://t.co/nwkvc23wnw

Prime Video has cancelled their TV series adaptation of I Know What You Did Last Summer after one season. If you are wondering, the first season resolved the mystery and had nothing to do with the original 1997 movie.

P.S: If you are wondering what's going on in the title, Amazon now wants you to refer to their streaming service as just "Prime Video" and not "Amazon Prime Video".

A red delicious Adele invites you into the post.

“It was really Justice League that was the nadir for me. That was a bad experience because of a confluence of things: my own life, my divorce, being away too much, the competing agendas and then Zack’s personal tragedy* and the reshooting. It just was the worst experience. It was awful. It was everything that I didn’t like about this.”

“That became the moment where I said, ‘I’m not doing this anymore.’ It’s not even about, like, Justice League was so bad. Because it could have been anything.”

[* his daughter died and he left the film, being replaced by joss whedon]
Collapse