Here are (almost) all of the announcements, trailers and clips released during Netflix fam event TUDUM.

Breaking News out of #TUDUM!

Sex Education has been renewed for Season 4! pic.twitter.com/8N2WwNLqoG

Toss a coin to our growing Witcher universe! We can officially announce The Witcher Season 3, along with a second anime feature film, and a new Kids and Family series set in the world of The Witcher. pic.twitter.com/E032fDAXYx


-Full performances from Coldplay, Stormzy,Lumineers, Ozuna, One Republic, H.E.R and more can be seen at the Global Citizen Youtube Channel

Lots of Racing this weekend: Sochi, the IndyCar championship concludes at Long Beach, yes the ads are terrible,, but it’s been a stellar and exciting season to watch, three people could take the championship, also I wanna go to Laguna Seca. Also there's IMSA, NASCAR, World Superbike. The F1 Miami GP is coming soon, if interested tickets go on sale October 26th.

Also more of my chaotic updates, Callum Ilott, the 2020 F2 runner up, has joined IndyCar full time with the Juncos Hollinger Racing, and Romain Grosjean has moved from Dale Coyne to top tier team Andretti Autosport for the 2022 season.

Open to: All, detailed results viewable to: All. Participants: 159

#KellyPrice sister called in @LarryReidLive to ask all her fans for prayer. As we reported, Price’s attorney has confirmed that the singer is okay .. but her sister would like more proof by physically seeing her. pic.twitter.com/XSlgbrcigf

The bizarre and troubling saga of Kelly Price continues. First she was reported missing, then her attorney claimed she was not missing, now her sister is disputing this claim.

The singer was hospitalized for COVID-19 in July. Price's siblings and children claimed that her boyfriend, Terrell Babers, was not allowing them to see her. Police conducted a welfare check and spoke with Price's boyfriend. There was no evidence of foul play, though they did not actually see or speak to Price. A missing person's report was filed September 18th, though it's not clear by whom.

Price's attorney, Monica Ewing, stated that Price was never missing but is simply recovering from COVID in a quiet place. Shanrae Price, Kelly's sister, disputes this. She called into the Instagram-based show Larry Reid Live to air her doubts and say that the family has not heard from Kelly for weeks.

Lily announced her third pregnancy while attending the opening gala for the Academy Museum of Motion Pictures last night. She and Hamish share two daughters together (born in 2017 and 2020) and he has a fourteen year old, Lucinda Rose, from his first marriage.

The singer opened the spring summer 2022 show of the prestigious house of the Medusa.

-Mingus Reedus, 21 year old model son of model Helena Christensen and 'The Waling Dead' actor Norman Reedus, allegedly struck a woman in the face after an altercation
-He punched a 24-year-old woman in the face while attending Manhattan's San Gennaro street festival on Friday night
-Mingus did not know the woman, who was rushed to hospital and treated for facial injuries.
-Last week Mingus made his debut on a Vogue cover for the Vogue Hommes Paris' fall-winter 2021-2022 issue

EDIT TO ADD:
additional relevant info on the incident:

- According to Mingus, he “threw his arm out” to protect himself from the woman and accidentally hit her. “It was instinct, I was reacting to them swarming me and was afraid for the safety of my group. We didn’t think anything of it, but these five girls followed us for two blocks, throwing food at us and yelling,” he continued. We told them to leave us alone, but they kept following, threatening to hurt my girlfriend and her friend. These girls swarmed me,” Mingus alleged, “one pulling my hair from the back, another throwing water in my face."
- “Ten seconds later the police got involved,” Mingus said. “Police saw one of the girls hurt and refused to listen to the context. My intention for that day was to mind my own business and play fair games.”

Drake’s Certified Lover Boy rules the Billboard 200 albums chart for a third consecutive and total week, as the set earned 171,000 equivalent album units in the U.S. in the week ending Sept. 23 (down 28%).

NCT 127’s Sticker: The 3rd Album bows at No. 3 on the Billboard 200, marking the second top 10 and highest-charting release for the 10-member act. The Korean pop group’s latest effort launches with 62,000 equivalent album units earned.

Shang-Chi and the Legend of the Ten Rings stayed at the top of the box office for the 4th weekend in a row. The film took in $13.3 million. Its domestic total of $196.5 million is the highest of the pandemic era.

Dear Evan Hansen was the latest movie musical to fall on its face, grabbing $7.5 million from 3,300 theaters. The sociopathic film recieved an A- Cinemascore but its PostTrak of 60% recommend on Friday fell to 57% by Saturday.

Overall gross for this weekend is currently sitting at a very low $36 million, a number not seen since May.

Next weekend's releases include Venom: Let There Be Carnage in theaters, The Many Saints of Newark in theaters and HBO Max, The Guilty on Netflix, The Addams Family 2 in theaters and VOD, Hotel Transylvania 4 on Amazon, and Titane.

Elizabeth Holmes has arrived at the courthouse and is surrounded by cameras. Three of her fans try to catch a glimpse without losing their spot in line. pic.twitter.com/O5AbR4XTJw

Former Theranos founder Elizabeth Holmes is currently on trial for 12 charges of fraud for deceiving investors about the capabilities of her company's blood tests. Holmes was the subject of the book Bad Blood, ABC's podcast and TV series The Dropout, the HBO's documentary The Inventor: Out For Blood in Silicon Valley, and two rumored film projects.

Highlights (lowlights? from the trial:

Open to: All, detailed results viewable to: All. Participants: 122

Drake criticised for declaring himself a ‘lesbian’ in song on new album https://t.co/pomjDiIJtK

A few of the lines from the song:
“please bring your girlfriend along with you”
“She like eating p***y, I’m like, ‘Me too.,”
“Yeah, say that you a lesbian, girl, me too / Ayy, girls want girls where I’m from / Wait, woah, yeah, girls want girls.”

Surprised we haven't had a post about this yet

Calling all ONTD theater lovers (all 15 of us)! It's Tony night so let's discuss the winners, the losers, and the fashion.

If this picture doesn't sum up the juxtaposition of the Tony Awards, I don't know what does. Darlene Love, Matthew Morrison, Marissa Janet Winokur, Chester Gregory, and Kerry Butler perform at the Tony Awards. 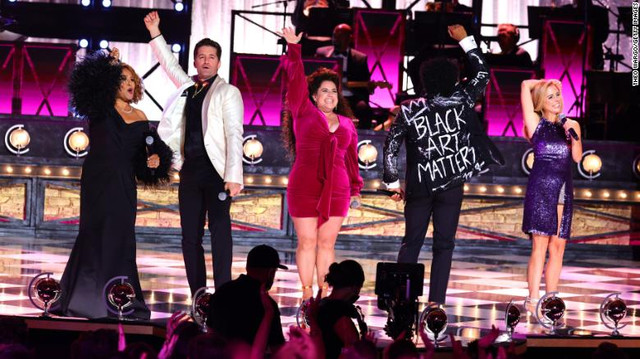 For those of you who are casual theater fans, some weird stuff about this year's Tony Awards:

* Only four musicals were eligible for Tony awards this year: The Lightning Thief, Jagged Little Pill, Tina: The Tina Turner Musical, and Moulin Rouge! (the exclamation point is part of the title, not me being overly enthusiastic). That's why you see the same three shows nominated in every musical category (The Lightning Thief got zero nominations) and why there aren't five nominees in every category.

* Aaron Tveit was the only nominee in the lead actor in a musical category because no one else was deemed worthy. He still needed 60% of the votes in order to officially win.

* All of the nominees for best score this year were plays. This is because three of the four eligible musicals were jukebox musicals, meaning they did not have original scores (the fourth was universally loathed and received no nominations despite the extremely small field of eligible musicals).

ETA: performances under the cut!
( Collapse )

ONTD, what is your all time favorite musical?

The #RHOP ladies share their opinions on the music video shoot for "Drive Back" and Chris Bassett's manager role.https://t.co/LbXAR2sh4E

- Tinted Testicle was big mad on Candiace's behalf like
- this fucking Gucci Fiat and Yellow Light Green Light's ugly ass home . Well, she's got a leg up on Chateau She Can't Pay. This house looks like someone glued a Motel 6 and Homegoods clearance model and got the nerve to say Professor Chaos and Konniving Kurn can't go in the house, like going in this Justice ass decor monstrosity is a privilege
- Are you buying LaDame candles? They are out of the discovery phase!
- Oooooooh 👴🏿 getting him some calls. Who that blowing up ya phone 👴🏿?
( Collapse )

Do you prefer 3-wick or a 1-wick? You've been calling Jen from Appleton for the stock?

Lena Dunham, 35, married Luis Felber this weekend, according to a source. She first announced she was dating the English-Peruvian singer in April. Dunham's last public relationship with Jack Antonoff ended in January 2018, after five years together.

Pedro Pascal shared a new look of the upcoming adaptation of ‘The Last of Us’.

reddit user @leedavis1987 asked "What movie do you dislike but everyone seems to love?" here are some of the answers, you can read the whole post at the source.

- Boyhood (2014)
"I don’t care how long it took to fucking film it. It was like watching a set of home videos about some kid I don’t care about."

- 2001: A Space Odyssey (1968)
"Yeah it looks great and definitely for the time it was made but holy fuck I almost blew my brains out from boredom."

- The Greatest Showman (2017)
"The whole time I felt like there was something wrong with the way the audio/music was mixed, and it ruined the whole movie-watching experience for me"

- The Fast and the Furious Franchise (2001 - )
"Mindless, bends the laws of physics, and gross use of CGI to make up for piss poor acting abilities. The Expendables would be my runner up movie chain that was created when actors have gone beyond their prime in acting skills or just don't care anymore."

- The Breakfast Club (1985)
"I can’t stand it but a lot of people actually love this movie apparently. I just don’t think this movie aged well."