ugh, I will never get over how the original song deserved the proper music video treatment
source

The Kay Cannon directed Cinderella starring Camila Cabello, Billy Porter and Idina Menzel, which premiered this past Friday, was the most streamed film over the Labor Day weekend and deliver's the highest number of views for a musical since Hamilton. 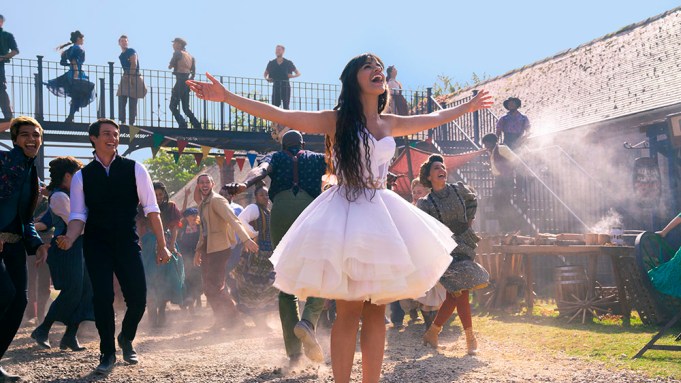 The film also beat out Shang Chi as a social media topic in the US.

The numbers in the graph are for the four days it opened on Prime Video.

Other things of note for the film.

- Per Listen First, the film ranked #1 in Social Talkability and Engagement in the US Across Both the Film & TV Industry.

Monica reveals to Linda that she is having an affair with the most powerful man in the world.

To celebrate the 20th anniversary (of my favorite) of Band of Brothers this year, Tom Hanks will be the first guest of the new podcast. It will examine each episode of Band of Brothers starting with a double dose next week with a prologue and the Hanks co-penned ‘Currahee’ first episode. In focusing on the tale of “Easy” Company, 2nd Battalion, 506th Parachute Infantry Regiment, of the Division, the ‘Currahee’ podcast will have actor Ron Livingston, who played Captain Lewis Nixon as its guest. Others like Damien Lewis will also guest star in the coming weeks.

As with previous HBO podcasts, the BoB podcast will be available on Spotify, Apple Podcasts and other major platforms.

I was going to do an original but I'm tired. So use this as an excuse to talk about faves and episodes and why it's the best.

Oreo and Pokémon released a short to announce their new collaboration in cookie form.

Whereas the doughnuts company also teamed up with the franchise for their own rendition of the treat with Pikachu, the Kanto starters and a poke ball. Exclusive to Australia at $29.95 AUD (approximately $22 USD) for a box of 12.

Premieres on December 10 on Amazon Prime

-“I don’t think I’ve met too many people for whom social media is a net positive.”

-“When I talk about being playful in the making of this album, there was, for want of a better word, a sexual component to that.”

You rang? The Baby-Sitters Club is back for a new season with new friendships, new challenges, and of course, new business! Season 2 premieres October 11th, only on Netflix.

From The Haunting of Hill House creator Mike Flanagan, Midnight Mass tells the tale of a small, isolated island community whose existing divisions are amplified by the return of a disgraced young man (Zach Gilford) and the arrival of a charismatic priest (Hamish Linklater). When Father Paul’s appearance on Crockett Island coincides with unexplained and seemingly miraculous events, a renewed religious fervor takes hold of the community - but do these miracles come at a price?

Variety reports that Netflix has signed Addison Rae to a multi-picture deal.

Rae told Variety that she’s excited to be working with Netflix again and is looking forward to their future projects.

“I’m thrilled to be able to collaborate with this incredible team and am excited to develop projects while continuing to strengthen my skills as an actress.”

One of the UK's most popular boybands, The Wanted, is officially back after taking a hiatus in 2014. Wednesday's announcement comes nearly a year after bandmate Tom Parker's stage four glioblastoma diagnosis, which is the most aggressive type of cancer.
( Collapse )

Young Anthony Soprano is growing up in one of the most tumultuous eras in Newark’s history, becoming a man just as rival gangsters begin to rise up and challenge the all-powerful DiMeo crime family’s hold over the increasingly race-torn city. Caught up in the changing times is the uncle he idolizes, Dickie Moltisanti, who struggles to manage both his professional and personal responsibilities—and whose influence over his nephew will help make the impressionable teenager into the all-powerful mob boss we’ll later come to know: Tony Soprano.

Blue Banisters has been slated for an October 22 release date and is available for preorder now. The standard edition cover art for the album, photographed by Neil Krug, was unveiled in July. The album will be available on cassette, CD and vinyl, some with exclusive alternate artwork. It does not include contributions from Jack Antonoff, who produced the majority of Del Rey's previous two albums.

"I guess you could say this album is about what it was like, what happened, and what it's like now," Del Rey wrote on social media. "I've never felt the need to tell my story, but if you're interested this album does."

-Alexis Neiers is dating Kris, the ex-girlfriend of Braunwyn
-Alexis will remain “very happily married” to her husband Evan Haines and Kris is seeing other people, too
-They have a strong emotional connection and so Alexis is not jealous or threatened by being in an open relationship
-No one knows Kris' last name 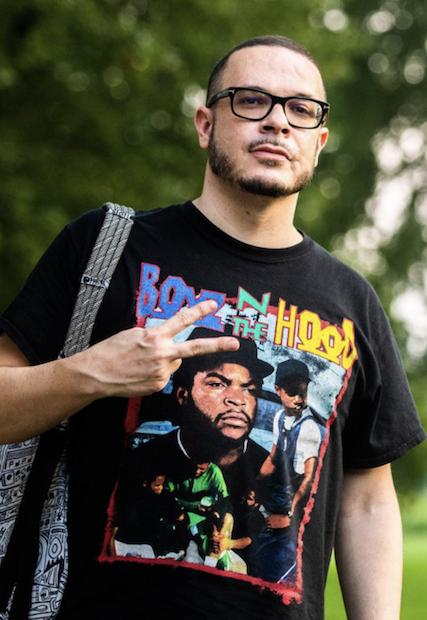 Last month, Shaun King announced that he would debut a "private fashion line" on September 8th. Well... today is September 8th, and there is no news about the fashion line. The alleged scammer claimed that the brand, A Real One, would be "a fully Black owned fashion brand that will change the entire supply chain."

An Instagram for the probably nonexistent brand offers a link, but that links takes you to a newsletter signup sheet. I know because I signed up and there is still no word about my private fashion items, Shaun!

PLEASE tell me #ShaunKing is not selling FREEDOM FASHIONS?! 🤣 #ShaunFashionNovaKing let me get to work on part two of @ScamGoddessPod I can’t resist now. https://t.co/x3fWeuFi9V

Open to: All, detailed results viewable to: All. Participants: 273

What is your favorite fashion-related nickname for Shaun King?

Here's what the critics so far are saying:

Variety --- A complete mess that lands in the same repetitive and empty swamp as the other sequels in the franchise.

The Hollywood Reporter --- Violence and gore is ampted up at the expense of actual scares or suspense. Jamie Lee Curtis is wasted.

The Playlist --- Doubles the body count but slashes its IQ in half. Hardly any fake-outs, red herrings, or surprises.

IGN --- A dark, angrier film, but one that feels like table-setting for the finale next year.

With 11 reviews, the film currently has a 46 on Metacritic, a 19-point drop from the last installment.

DON’T LOOK UP tells the story of two low-level astronomers who must go on a giant media tour to warn mankind of an approaching comet that will destroy planet Earth. Written and Directed by Adam McKay.

Jasmine wore a hand-embellished floral lace Zuhair Murad gown with long sleeves and a high collar. The dress had a detachable ball gown skirt made of duchess silk and Italian tulle.

Jasmine and Juan have been together since 2016.

From Jennifer Lopez's Versace "dress" and Bjork's swan dress to Britney and Justin's matching denim-on-denim ensembles, Vanity Fair writer Leah Faye Cooper and fashion director Nicole Chapoteau look back on the fashion trends and red carpet moments that defined the early 2000s and examine all the ways they have made a comeback.

Open to: All, detailed results viewable to: All. Participants: 48

Ontd do you look to your family for opinion on your dating life?

Jennifer Lawrence and husband Cooke Maroney are expecting their first child together.

Lawrence and Maroney were first spotted in June 2018 and were engaged in February 2019. The couple got married in October 2019.

Jennifer Lawrence is PREGNANT! She shows off her baby bump for first time https://t.co/677WZog6EF

Are you in your post-Joker era, ONTD?

-Newest episode of What If takes on the popular Zombie genre.

Elizabeth Debicki as Princess Diana and Dominic West as Prince Charles on the set of Netflix’s #TheCrown season 5. pic.twitter.com/mnFcZ89adI

First look of the actors in season 5 of The Crown. pic.twitter.com/iUrMJuZSL4

The first photos of the two young actors playing Princes William (Timothee Sambor) and Harry (Teddy Hawley) in the upcoming season of 'The Crown' were released online. The two actors were photographed with on-screen parents, Elizabeth Debicki (Princess Diana) and actor Dominic West (Prince Charles), on the set of the show.

'The Crown' season 5 is releasing... next year?

Even if you've never dribbled a ball, threw a right cross, or made an own goal, watching sports documentaries bring a sense of accessibility and appreciation for the sport and sometimes, those players. They can be some of the most compelling and smartest pieces of entertainment. Netflix's new series Untold brings us five really four separate sports stories, chock full of shocking moments, heartbreak, victory, among others. The limited series concluded yesterday and this post is to discuss any episodes if you've seen any.

Episode 1: Malice at the Palace

The first episode was a reexamination of the infamous players vs fans at the Indiana Pacers vs Detroit Pistons fights known as Malice at the Palace. The first episode details the pivotal players (Ron Artest (now known as Metta Sandiford-Artest), Jermaine O'Neal, Stephen Jackson) who rightfully get to vindicate and tell their side of the story and the episode shows unseen CCTV footage. Yes, the fight was infamous, but what is most important is the highlight of the racist narrative made by the media and the NBA executives to dehumanize the players.

Feel free to discuss any of the episodes if you've seen any or any other sports documentaries you've watched!

Dreams really do come true. From the imagination of Edgar Wright, Last Night In Soho is only in theaters October 29.

In acclaimed director Edgar Wright’s psychological thriller, Eloise, an aspiring fashion designer, is mysteriously able to enter the 1960s where she encounters a dazzling wannabe singer, Sandie. But the glamour is not all it appears to be and the dreams of the past start to crack and splinter into something far darker.