Zachary Quinto and Brandon Flynn had a fun night out together at a NYC Pride Weekend party. Check out the new photos! https://t.co/S9GDVaKPKV

Zachary Quinto and Brandon Flynn enjoyed a fun night out together during NYC Pride Weekend.

The actors were also seen together the evening before while watching Madonna‘s surprise performance at a Pride Weekend kick-off event.

S1 aired in 2019, which made me think it was totally dead. S2 will film later this year in Scotland. Despite Pratchett's death in 2015, Neil Gaiman did say the pair had fleshed out where the story would go after the books for a potential TV show.

I never thought my icon would be relevant again lol

Ariana Grande posted a video on her social media that supposedly had her friends tie her up in a chair and summon spirits, for her birthday. She has now deleted the video but i mean at least it's original? *whispers* DO IT FOR HIM, DEUTSCHLAND...

After going into extra time after being tied, but Spain brought home the victory, beating Croatia 3 - 5. And then if you thought the excitement would die down after that match...

France, the predicted favorites to win the Euro 2020 were ELIMINATED by Switzerland. France was looking comfortable with a 3 - 1 lead after waking their asses up in the second half, but the Swiss poked some holes in their brie and tied it up with goals in minute 81 and minute 90. After neither team made a goal in extra time, we went to OP's dream scenario - PENALTY KICKS. Each team was getting petty and Switzerland made all five PKs so it was down to France. If they made it sudden death! But they didn't and the kick attempted by Kylian Mbappé was deflected by the Swiss GK. 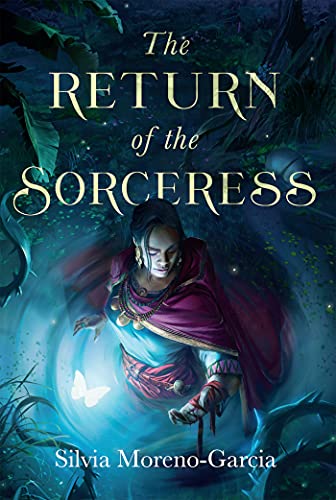 The Return of the Sorceress
From the bestselling author of Mexican Gothic comes a magical novella of revenge and redemption.

Yalxi, the deposed Supreme Mistress of the Guild of Sorcerers, is on a desperate mission. Her lover and confidant seized her throne and stole the precious diamond heart, the jewel that is the engine of her power. Yalxi sets out to regain her magic and find a weapon capable of destroying the usurper. But this will mean turning to unlikely allies and opening herself up to unpleasant memories that have been suppressed for many years. For Yalxi is no great hero, but a cunning sorceress who once forged her path in blood—and must reckon with the consequences.

Today would have been the 115th anniversary of artist Pedro Linares López, creator of the fantastical creatures known as alebrijes, and Google commemorates him by giving him the doodle of the day.

Alebrijes are whimsical creatures made out of wood or papier-mâché, decorated with strident patterns and colors, deeply linked to the state of Oaxaca in southern Mexico and are part Mexican folk art.

The first creations were product of Linares having a feverish nightmare while bedridden in his youth, he was walking in the dreamscape’s woods and found himself surrounded by the monsters. When he recovered, he started doing them and quickly getting popular, with even icons like Frida Kahlo and Diego Rivera becoming fans of his works.

Alebrijes proved to be highly influential, quickly turning into a highly coveted trademark of his and Oaxaca and becoming part of Mexican iconography. Disney’s coco was highly influenced by these creatures, with the color palette, designs and patterns heavily taking from them to create a magical adventure.

South Korean girl group TWICE have released their newest Japanese single and music video, "Perfect World," the title track off their upcoming full-length Japanese album of the same name! The full album will be out later this summer on July 28th, with 10 tracks including previous releases "Kura Kura," "BETTER," and "Fanfare."

Is anyone still watching?

How Long Do You Think It’s Gonna Last?

Our new record is out August 27 on @37d03d / @Jagjaguwar
Pre-order now athttps://t.co/UKQCUFeUcm#howlongdoyouthinkitsgonnalast pic.twitter.com/5lBptiIFaP

We finally have our first look at the Sopranos prequel The Many Saints of Newark with its first trailer drop.

The film hits theaters and HBO Max on October 1. 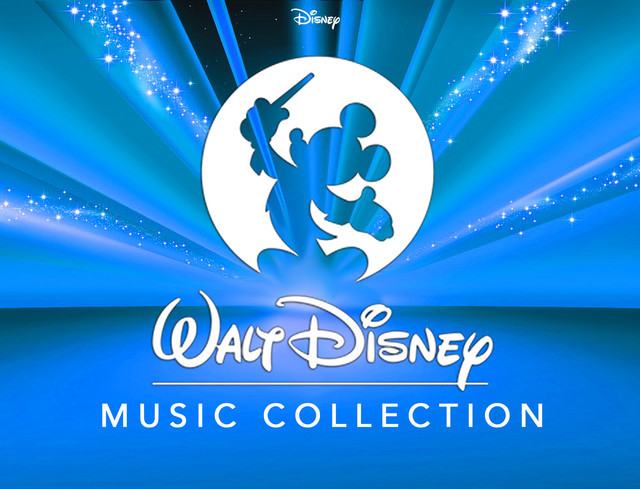 Disney music catalogue is so vast and –for the most part– exceptional, that it’s no surprise some songs get lost in the shuffle. In this thread, we’re putting the spotlight on ten outstanding tracks that are too often overlooked. No “A Whole New World” or “Circle of Life” to be found here!
( Collapse )

What year is it Kyle? Kyle Massey (no not Kyle Dean Massey) aka Cory from Cory in the House on Disney Channel, is in deep shit for inappropriately texting a minor.
He allegedly sent sexually explicit videos and messages to a 13 year old girl and was charged with a felony.
He was sued in 2019 for sending explicit videos and texts over Snapchat but claimed he was being 'extorted'.

(adding tweets with more info as i find them)


KimK's SKIMS (formerly Kimono) are going to design the loungewear for the USA Olympic team.


I am honored to announce that @SKIMS is designing the official team USA undergarments, pajamas and lounge wear for the athletes this year in Tokyo and the same pieces will be available in a capsule collection at https://t.co/Qsy51Sl2Sd 🇺🇸 pic.twitter.com/u2IWXCmUup


ONTD have you tried Skims? 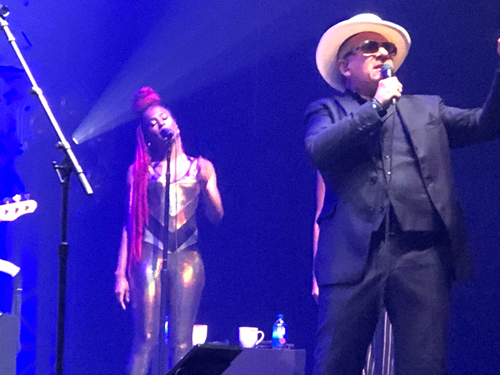 In response to Billy Edwards' Tweet: "This is fine by me, Billy. It’s how rock and roll works. You take the broken pieces of another thrill and make a brand new toy. That’s what I did."

He points out that Bob Dylan's "Subterranean Homesick Blues" is very similar to Chuck Berry's "Too Much Monkey Business", but Dylan never got shit on.

OP also knows that Escape Club's Wild Wild West has a very similar riff to Pump It Up, but doesn't remember anyone really caring too much about that either.

The brand describes the 10 pieces - not for consumer purchase - as "a collection of IKEA loveseats inspired by the Pride flags of different 2SLGBTQ+ identities [and] a platform to celebrate identity and share stories of love."

- designers, artists, creators are members of the community
- each sofa has a cute lil blurb at the main website about the inspo behind the design.

The reception has been mixed, particularly in regards to the bisexual couch. 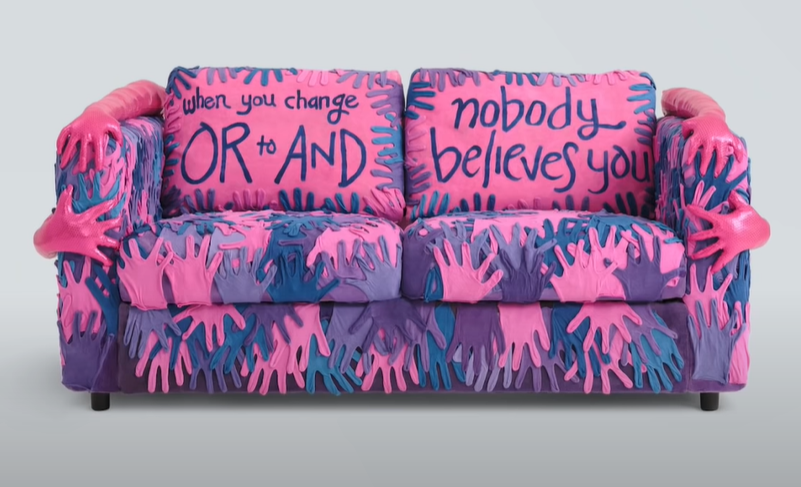 The stark tonal shift between this couch and the others had people on Twitter questioning the choices of the designer (Charlotte Carbone) and ikea.

[screencaps of a few of the others for comparison] 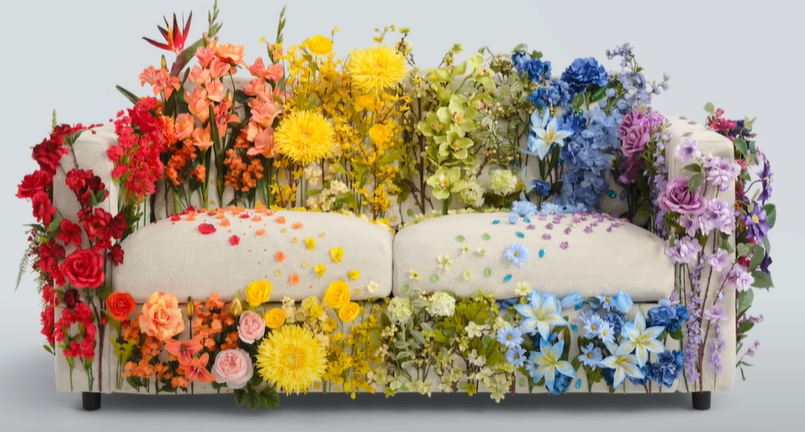 progress flag (supposedly - this just looks like the original rainbow) 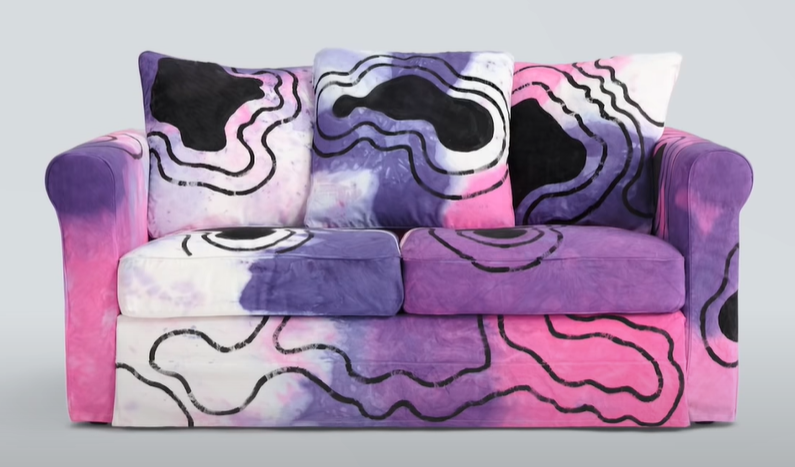 The backlash has led the author of the poem that inspired the bisexual couch to respond.

I’m a spoken word poet and the hands are meant to represent the audience reaction, especially those of other bisexual folks who would approach me after performances and share their story with me.

When middle-schooler Emily Elizabeth (Darby Camp) meets a magical animal rescuer (John Cleese) who gifts her a little, red puppy, she never anticipated waking up to find a giant ten-foot hound in her small New York City apartment. While her single mom (Sienna Guillory) is away for business, Emily and her fun but impulsive uncle Casey (Jack Whitehall) set out on an adventure that will keep you on the edge-of-your-seat as our heroes take a bite out of the Big Apple. Based on the beloved Scholastic book character, Clifford will teach the world how to love big!

Madonna took to social media to let the world know that she did it first following Lil Nas X's now viral BET Awards performance where he kissed another guy.


Like who asked? Also it's funny how she can post about this, but can't speak up for Britney.

Stuart Damon, who played Dr. Alan Quartermaine for decades, had been struggling with renal failure.

Amber Tamblyn, who played his adopted daughter Emily on the soap, shared a tribute:

Broken hearted to hear of the passing of Stuart Damon. He played my adopted dad on General Hospital for 7 years and he was the most kind, wonderful, loving, supportive person. He always made me laugh and made me feel safe on set. I love you, Stewy. Rest well now, my friend. pic.twitter.com/XY5mEfwezn

The TikToker who started a petition to end the 'Spill Your Guts' segment on James Corden's show says the host gave a 'non-apology' https://t.co/gJgh9jxWy1

Irrelevant asshat and public nuisance James Corden is finally getting shamed for his racism on his show.
He was called out specifically for the 'Spill Your Guts' segments. Multiple items on the show are actual Asian delicacies, which he deems gross. These include fish eyes and thousand year old eggs.
Over 40,000 people signed a petition calling for his bitch ass to be fired.
Corden has essentially given a non apology via the Ellen method.

Dakota Johnson please we need you to work your magic

"My English is not good enough!"

- Federer won his 1st Round match after Mannarino retired at 2 sets all due to an injury sustained during the match
- During the on court interview Federer was asked if 'absence makes the heart grow fonder' with regards to Wimbledon being cancelled last year
- Federer (a native Swiss German speaker with a South African English speaking mother) is generally considered fluent in English as well as German and French but asked for the phrase to be repeated before admitting he didn't know what it means.

Is English your first language ONTD?

‘F9’ actor Nathalie Emmanuel shares her hair, skin-care, and makeup routine while reflecting on the industry and the impact of her ‘Game of Thrones’ character.

Watch individually uploaded clips of her performances on her YouTube channel here.

"Beckinsale (Underworld, Van Helsing) stars as Lindy, a “beautiful, sardonically funny woman with a painful secret: Due to a lifelong, rare neurological disorder, she experiences sporadic rage-filled, murderous impulses that can only be stopped when she shocks herself with a special electrode device.”

Oops, I included the Youtube source this time mods! Glad to see more trashy fun action movies being made for people outside of the straight middle-aged man category.

Madison Beer has premiered the music video for her latest single, "Reckless," which she co-directed with Amber Park, and it's... something.


- Cara Delevingne covers Cosmopolitan and talks about being friends with exs, the sex bench, and her sex toy line and how annoying it is to be romantically linked to any woman she stands next to.


Interview and video under the cut

The first reviews are in for #BlackWidow - currently it's #Fresh at 87% on the #Tomatometer, with 62 reviews: https://t.co/kTFg8O0UcM pic.twitter.com/Rl0nkLOlsO

The critics consensus reads: Black Widow's deeper themes are drowned out in all the action, but it remains a solidly entertaining standalone adventure that's rounded out by a stellar supporting cast

Open to: All, detailed results viewable to: All. Participants: 269

how will you be watching Black Widow?

Youtuber Nathan Zed looks into the end of the teen dsystopian movies. or how everyone tried to be next The Hunger Games and no one was

Serena Williams receives a standing ovation from the crowd at #Wimbledon

Williams was forced to retire in the first round of after sustaining an apparent injury. pic.twitter.com/exFZxJJZGh

- Serena was up a break when an awkward slip on the baseline (similiar to where Mannarino had fallen on in the Federer match before) caused her to go off court for a medical time out.
- Serena returned to the court limping and tried to play on, but struggled to put weight on her ankle and in the end was reduced to tears by pain and emotion and forced to retire
- Aliaksandra Sasnovich progresses to R2
- Serena seemed to bid an emotional farewell to the crowd as she left