The band is back together! 🙌 Get ready for new laughs with this original cast during the #ReunionRoadTrip special this Thursday on E! pic.twitter.com/lYttNYRgMl


-E! Entertainment reunited the cast of "A Different World" where they discussed the legacy of the NBC show that was a top 5 rated show in the country for 4 years.


-"Reunion Roadtrip" has brought cast members of shows as varied as "Queer Eye for the Straight Guy" and "All My Children".

More under the cut


Charnele Brown (Kim) talks about being a role model for dark skinned girls.


This popular sitcom cast is reuniting to reflect on their collective experience. Don't miss the #ReunionRoadTrip Special TOMORROW 9/8c on E! pic.twitter.com/2IDxR3a9FP


Excutive producer Susan Fales-Hill talks about keeping the show topical since it was set in college, and how the producers would go to Morehouse and Spelman college to do research and talk to the students about what was going on in there lives and what they wanted to see reflected about them

Sinbad wasn't lying tho ❤️ Watch this cast reunite during the #ReunionRoadTrip special 9/8c only on E! pic.twitter.com/7UZj0CW4sa

Britney Spears was all smiles while soaking up the sun in her favorite place with boyfriend Sam Asghari for a much needed getaway!

The singer flew to Maui, Hawaii the following day after giving an explosive testimony heard around the world in court discussing her ongoing conservatorship.

IF SHE IS HAPPY I AM HAPPY ☺️♥️
Britney in Hawaii #FreeBritney pic.twitter.com/3tU3mIi1ZP 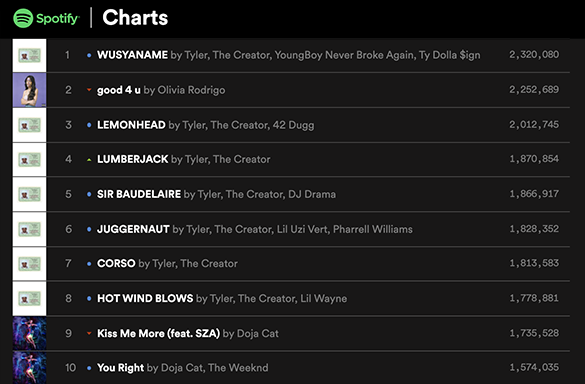 Several big Friday releases have shaken up the Spotify charts! Pictured above (you can click the photo to head to the Spotify Charts website) is the US Spotify Top 10 for June 25 2021: Tyler the Creator's "WUSYANAME" debuts at #1 with 2.3 million streams, with songs from his new album Call Me If You Get Lost occupying seven of the top ten spots.

Doja Cat was another big winner, with the drop of her album Planet Her landing her two spots in the top 10 with "Kiss Me More" and "You Right" sitting at #9 and #10 respectively.

Olivia Rodrigo's "good 4 u" hangs in at #2, just behind the #1 spot with 2.2 million streams. Interestingly, BTS's "Butter," the song currently beating her on the Billboard Hot 100 for the past several weeks, is not even in the Top 40 of US Spotify.

Also missing out on the US Top 10 is Ed Sheeran's new single, "Bad Habits," which debuts at #16 with 1.2 million streams. 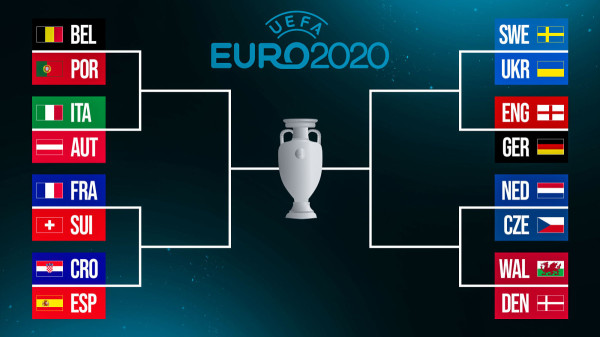 Here's how the outcomes look for the round of 8

.@TylerTheCreator floods the US Spotify chart with tracks from his new album, ‘CALL ME IF YOU GET LOST.’

He occupies seven spots in the top 10. pic.twitter.com/3fXbu2hbPA

Tyler The Creator ocuppies seven spots in the top 10 with his new album ‘CALL ME IF YOU GET LOST.’
Also apologies to Selene Gomez in “Manifesto,” for sexist attacks on her on twitter when she was in her late teens.

“I was canceled before canceled was with Twitter fingers/Protestin’ outside my shows, I gave them the middle finger,” he raps. “I was a teener, tweetin’ Selena crazy shit/Didn’t wanna offend her, apologize when I seen her/Back when I was tryna fuck Bieber.”

The messages (now deleted) said: “Selena Gomez is now 18, so she can now legally take my dick …”; “I want to fuck Selean Gomez in her mouth”; and “@SelenaGomez wanna lick my gooch?”
He was temporary suspended on twitter for this.

Jennifer Lopez and Ben Affleck Enjoy L.A. Date Night: 'They Were Both in a Great Mood,' Source Says https://t.co/ghwA1Zoztm

Ben Affleck and Jennifer Lopez were all smiles out to dinner at Avra Beverly Hills Estiatorio last night. They dined out in a private room for two hours.

A source said, "They were both in a great mood. Ben always looks very happy when he is with Jen."

The source also said that Lopez "is incredibly happy" in her rekindled romance with Affleck.

OP wants to remind everyone not to be inspired to reunite with their ex because of these two.

Recently, "Simple and Clean" singer came out as nonbinary during a livestream in honor of Pride Month. In their Instagram post, they explained it further.

Riley Keough and Taylour Paige pose for Bustle during promo for their movie Zola out next week.

You can read the interview here.

The besties and soulmates (their words) also shared their unfiltered opinions with Bustle:

And before anyone asks, no, Riley Keough isn't a Scientologist anymore (she also liked the linked tweet).

The Lighthouse will finally see its Japan release on July 9th this year, which was naturally delayed due to Covid-19. In support of its Japanese release, Junji Ito made an accompanying 8-page manga for those purchasing a ticket to the film that explains the story.

Which movie would you like to see turned into a manga, ONTD?

How not to watch a bike race!

A crazy fan causes chaos on stage 1 of the Tour de France. pic.twitter.com/nydkPZWvXm

-A spectator during Stage 1 of the Tour de France today caused a massive accident after getting in the way of the racers while holding a sign.

-The sign-holder got in the way of cyclist Tony Martin, which caused a knock-on effect and a massive pile-up ensued.

-Stage 1 was won by French cyclist Julian Alaphilippe, who narrowly missed the carnage.


-To celebrate the 10th anniversary of "Born This Way" Lady Gaga had 6 artist of the LGBTQUI+ community put their own takes on some songs. The bonus disc was released Friday.

Ben Platt "You and I"


Big Freedia,Years &Years, The Highway Woman and more under the cut


Years & Years "The Edge Of Glory"

A fan DMed Demi to let them know they were pregnant and Demi mistook the pregnant emoji for a fat emoji and thought the fan was fatshaming them. After the fan clarified, Demi sent them a voice message.

Demi Lovato apologizes to the fan for taking their comment the wrong way, adding it was the best compliment. pic.twitter.com/ATzsWDPhFF

Have you ever misunderstood a text?

Rajiv Surendra (Kevin Gnapoor from Mean Girls) gives HGTV Handmade a tour of his NYC apartment which features lots of vintage/antique items as well as a plethora of DIY decor which includes his kitchen cabinets, his artwork, and his distressed mirror coffee table. He also shares with us a few of his various talents and hobbies which he's pursued since his days as a "washed up movie star"(his words, not OP's).

Some video highlights, which include:

★ His business Letters in Ink stemmed from his calligraphy hobby, creating wedding invitations as well as chalkboard menus for some local cafes and restaurants. He also produces handmade soap and candles under the name Wiseman Soap.

★ His stint as a costumed re-enactor at Black Creek Pioneer Village (Canada's equivalent to Colonial Williasburg) led to his appreciation for beautiful-yet-useful handmade things as well as tweed clothing and antique silver cutlery.

★ He loves cooking traditional Tamil food, which requires specific tools and utensils such as woven bamboo mats and clay pottery. He refers to his kitchen as a mishmash of NYC galley kitchen and Sri Lanka.

★ His tea towels, bedspread, and the fabric for one of his suits were woven by his friend. The suit took three years to make.

First post! ONTD, what's the one thing you refuse to settle on quality for? Have you picked up any new hobbies during the pan pizza?

Hello, OP is back and continuing the movie nights. Big thanks to

Synopsis: "After years of putting her career ahead of love, stand-up comic Andrea Singer has stumbled upon the perfect guy. On paper, he checks all the boxes but is he everything he appears to be?"

We'll be using the Google Chrome extension, Teleparty to watch. The extension is available on laptops and desktops. The movie will be starting at 9:00 PM ET. If you need instructions on how to install Teleparty just click this video.

The producers of Armchair Expert present a new 10 episode podcast, Shattered Glass with hosts Kristen Bell and Monica Padman. Shattered Glass refers to the glass ceiling that women everywhere have struggled to break since the women's rights movement.

John Mulaney and Olivia Munn Step Out for a Sweet Lunch Date in L.A.: 'They Were Having a Great Time,' Says Insider https://t.co/fXo6KbCwzO

John Mulaney, 38, and Olivia Munn, 40, had a lunch date together Saturday afternoon at Rick’s Drive In & Out in Los Angeles. “They were having a great time during lunch, laughing and talking,” an insider told PEOPLE. “They were really enjoying each other's company.”

This is the first time the new couple have been photographed together since Mulaney filed for divorce from his wife.


Courtney posted a photo on her instagram of Olivia's prom themed shoot and captioned it "spot the difference" to which Olivia eventually responded with "love u and live through this sooooo much" to which Courtney then responded with her favorite florist and that she looks forward to a note from Olivia soon.

Courtney also responded to a facebook comment asking if she was truly mad or not in which then she responded with the line "She didn't ask so a little of both, I dig manners X"

Member of PTPA board told Roger Federer to "bow to the true legend!" [ie. Novak Djokovic] among various other provocative tweets https://t.co/1T96voXjuD

You may or may not remember that tennis splintered last year when Djokovic and Pospisil left the ATP player council (elected to represent players in the ATP) to form the PTPA after ATP allegedly found out they were making moves to form the PTPA while on the council. PTPA is seemingly an attempt at a union in a sport in which players are freelance. They claim that by having tournament representatives on the board of the ATP as well as players, the ATP cannot meaningfully provide players with the opportunity to make the changes they want.

In the last few days the PTPA has launched their own website, annouced board members and set out their goals and aims.

One of their board members is Bill Ackman, American billionaire hedge fund manager and investor.

Another Katarina Pijetlovic (Sports law and policy, Sports Governance and Business, EU economic law) who has regularly and consistently disparaged the other members of tennis's Big 4 (Federer, Nadal, Djokovic and Murray) on twitter and regularly RTing 'Nolefam' (a name for die hard Djokovic fans who tend to have a strong dislike of Federer).

It seems an interesting choice in an organisation that claims to represent 'all players' while the founders (Pospisil and Djokovic) have repeatedly taken digs at Federer specifically rather than at the ATP. Federer, currently, along with Nadal were elected members of the ATP Player council replacing two of several players resigned in protest over Djokovic's aims on the council when he was President.

Several of Katarina's tweets have been deleted since (including one I quoted on twitter that disappeared shortly afterwards, belittling Nadal's career achievements in relation to Djokovic's) but there are some examples listed in the article.

She has posted a statement in regards to this.

I should mention she is already hiding replies and has blocked me on twitter (and probably others) for quoting with context about what she said.
Collapse