*"The record came roughly 19 months after it became the first music video by a K-pop group to surpass the 1 billion mark in November 2019."

*"The fierce pop-rap track peaked at No. 55 on Billboard’s main singles chart, a record high rank for a song by a female K-pop act at the time."

🚨 New photo of Mark Rufallo on the set of the Disney+ 'SHE-HULK' series & more!

Actress and stuntwoman Anais Almonte posted some photos from the filming of She Hulk.
She can be seen alongside genocide supporter Mark Ruffalo reprising his role as Hulk.
Anais is playing a character yet to be revealed. In addition to her and backtracking truther Ruffalo, the series star is Tatiana Malsany playing Jen Walters/She Hulk.

please make her the fourth wall breaking shulkie we all love and not the....abomination they have in the comics currently

Chrissy Teigen will be recast in ‘Never Have I Ever' guest voice-over role after people found out that she once engaged in online bullying against a 16-year-old Courtney Stodden.

Her spokesperson claim it was her decision to drop out a role in season 2 of the Netflix coming of age comedy from Mindy Kaling.

Reddit scary story We Used To Live Here gets a home on Netflix with Blake Lively https://t.co/OK04Zeuqeu pic.twitter.com/QjNfRCiddn

Netflix is securing a deal to adapt "We Used to Live Here," a four-part story that was originally posted on the scary story subreddit, NoSleep. They have reportedly already chosen Blake Lively to star as the lead.

The story starts with a new homeowner who receives a knock at her door, greeting a family of five whose father claims he used to live there as a child and requests to show the kids around. When they all become trapped in by a snowstorm, what follows is a super-creepy series of events that the protagonist could never have expected.

Can you see the family resemblance? The queens are challenged to makeover and raise their very own drag family members, out of drag first timers. 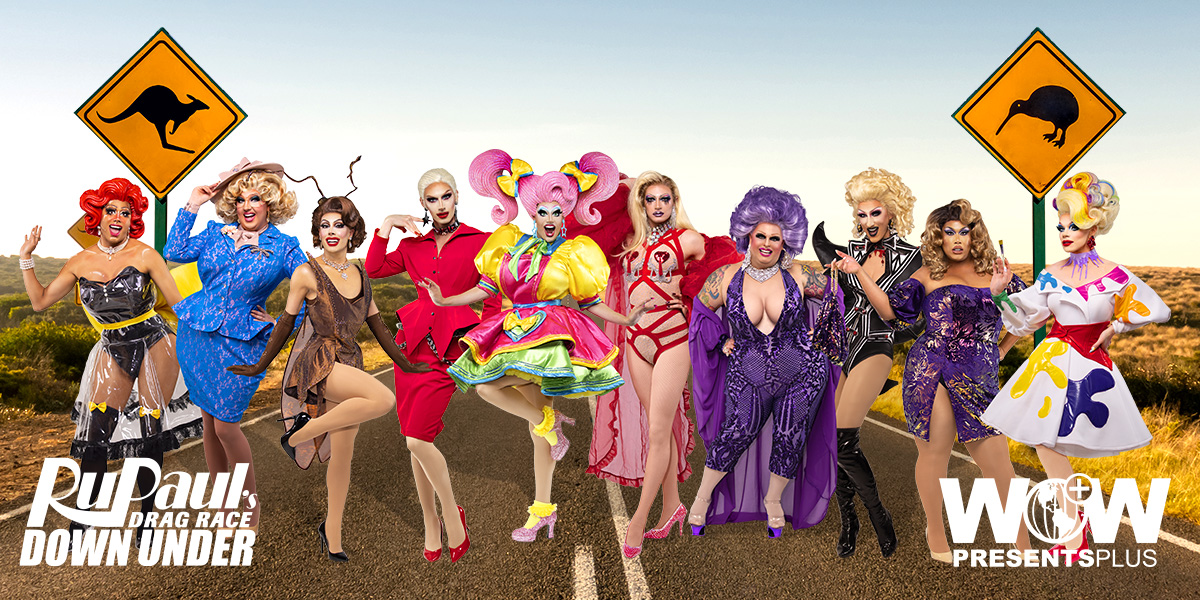 From sporty to snatched~ 💅🏁

I brought back Drag Race Roundup to this discussion post cause I've noticed lack of overall discussion and I like to showcase cool things the queens are doing outside of the show.

#AlecBaldwin and wife #HilariaBaldwin are starting their own podcast! 🗣 https://t.co/TQHihfp9p7


-Alec and Hilaria Baldwin are launching a new podcast called "What's One More?"
-They’ll discuss marriage, relationships, parenting, charity, and “how we can inspire others to be better and do more”.
-The podcast will debut on Tuesday, June 8.
source

Hit play and kick off the weekend.https://t.co/jokFFox2RF

In case you didn't know: over a year ago, Mary Kate and Ashley launched monthly musical soundtracks for their luxury fashion label The Row in an effort to engage their followers during the pandemic.

For June’s playlist, which went live on Friday, the designer duo’s picks makes us think they’re planning for a very chill summer, or at least starting off the warm-weather season in a low-key way. The tracks they chose range from the soothing sounds of Fleetwood Mac, King Krule, and Françoise Hardy to more upbeat dance songs by David Bowie, Prince, and Kraftwerk.

From the studio that brought you La La Land…comes a movie absolutely nothing like La La Land. #BorderlandsMovie pic.twitter.com/QHx6h7ioVa

A few silhouetted photos of the Borderlands cast taken by Jamie Lee Curtis have been posted on Twitter. The film is directed by Eli Roth and stars Cate Blanchett, Jamie Lee Curtis, Kevin Hart and Jack Black.
( Collapse )
Twitter 2 3 4 5 6 7 8


-Performances With a timestamp are with the whole 1 hour show under the spoiler cut.
-The Performers included:


T.J. Osborne is the only openly gay artist signed to a country label. The song "Younger Me" is a song about coming out and the video features LGBT youth and their families. The performance was also filmed in front of the Tennessee State Capitol Building, where a passage to honor and commend him for coming out this year was blocked by lawmakers.


The whole show and celeb appearances under the cut


Troye Sivan, Tate Mcrae, Regard "You"


P!NK "Cover me in Sunshine"

.@LilNasX letting us know what the 'P' in #pride stands for at #CantCancelPride 👏 pic.twitter.com/idqDIUIK0j

"On this #Pride we have to make sure everyone gets the RESPECT they deserve" 👏 yesss @IAMJHUD! #CantCancelPride

'The #LGBTQIA community is filled with AMAZING individuals' 😍 @ddlovato on what the 'I' in #pride means! #CantCancelPride pic.twitter.com/Q9JAWoy2J9

Who else better to kick off #CantCancelPride than Queen Dolly herself?! 🌈

Come celebrate love with us, outside of your 9 to 5! Tune into our Can't Cancel Pride event with @dollyparton & @proctergamble happening RIGHT NOW at the link below! https://t.co/H10aWO5IPI pic.twitter.com/6ym0eHLCq1


"Here's to love, to resilience and to an era of safety, equality and peace" 🏳️‍🌈❤️

Couldn't have said it better, @iamyola.

Tune in now to hear more inspiring messages from members of the LGBTQ+ community at the #CantCancelPride event sponsored by @ProcterGamble!

Watch her perform it live at the 2021 #CantCancelPride event sponsored by @ProcterGamble!

♬ Ugh... As if - Alicia Silverstone


-Alicia Silverstone recreated a scene from the hit film "Clueless" with her 10 year old son, where Silverstone uttered the 2 words that would define her career forever.

Can I just take the moment to not that my wife has been absolutely smashing the photo shoot game this year.

Jodie and Joshua remain undefeated in the type of couples humor Dax and Kristen think they're doing.

EXCLUSIVE: Angelina Jolie puts on a brave face and bright frock to celebrate 46th birthday with her six kids https://t.co/k1UhW5f7VL


Angelina Jolie celebrated her 46th birthday at LA's TAO restaurant. She wore a yellow dress by an unknown designer. All of her children were there to celebrate with her.
source

It’s not where you go. It’s what you leave behind . . . Chef, writer, adventurer, provocateur: Anthony Bourdain lived his life unabashedly. Roadrunner: A Film About Anthony Bourdain is an intimate, behind-the-scenes look at how an anonymous chef became a world-renowned cultural icon. From Academy Award®-winning filmmaker Morgan Neville (20 Feet From Stardom, Won’t You Be My Neighbor?), this unflinching look at Bourdain reverberates with his presence, in his own voice and in the way he indelibly impacted the world around him.

this is going to absolutely destroy me. I miss him so much

A Marvel series, a Stephen King adaptation, a historical epic, a couple family dramas, and more. Here are 18 new TV shows to keep an eye out for this month – what will you be watching? https://t.co/kfA7b0xjcO

Need something new to watch this month? Here are a few of the shows premiering in June:

Lisey’s Story (June 4, Apple TV+)
Another Stephen King adaptation, except this time its completely written by King himself. Follows Lisey (Julianne Moore) who is grieving the tragic death of her husband (Clive Owen), a novelist who may not have been who Lisey thought he was as repressed memories come to surface. Also starring Joan Allen, Jennifer Jason Leigh, Ron Cephas Jones, Dane DeHaan, and Sung Kang.
( Collapse )
Source

Kingdom: Ashin of the North will center around South Korean top actress Jun Ji Hyun’s mysterious character who appeared in the last seconds of the second season finale. It will not only tell the story of the mysterious heir to the Northern Yeojin tribe village but will also finally reveal the origins of the resurrection plant that triggered the avalanche of tragic events that swept through Joseon and a woman abandoned by all – Ashin.

Directed by Kim Seong-hun from a screenplay written by Kim Eun-hee, the special will be led by Gianna Jun as adult Ashin, Kim Sia as young Ashin, and Park Byung-Eun, who will reprise his role as head of Royal Commandery Min Chi Rok, one of the men that helped Crown Prince Lee Chang in fending off the infected from infiltrating the royal palace.

Premieres on Netflix July 23rd. No news of season 3 yet. This is more of a spinoff.

Kingdom seasons 1 and 2 currently on Netflix. Watch it.

Cillian Murphy (aka my husband) sat down to chat with Jimmy Kimmel about ‘A Quiet Place Part II’ and other sexy things. 😍

Synopsis: "A Manhattan couple moves to a historic hamlet in the Hudson Valley and come to discover that their marriage has a sinister darkness, one that rivals their new home’s history. Based on the acclaimed novel by Elizabeth Brundage."

Join me, won't you? We will begin our watch party at 9:00 PM ET (usually around 9:05 to let people get settled in). We have fun and chat and using the Chrome extension Teleparty (the artist formerly known as Netflix party). Unfortunately, the extension only works on desktop or laptop computers and not mobile devices. Here's a video on how to install Teleparty. If you have a smart TV that connects to Google Chrome... I don't know how to help you, ask your butler!

Nick Bannister (Jackman), a private investigator of the mind, navigates the darkly alluring world of the past by helping his clients access lost memories. Living on the fringes of the sunken Miami coast, his life is forever changed when he takes on a new client, Mae (Ferguson). A simple matter of lost and found becomes a dangerous obsession. As Bannister fights to find the truth about Mae's disappearance, he uncovers a violent conspiracy, and must ultimately answer the question: how far would you go to hold on to the ones you love?

It is set for release nationwide in theaters on August 20, 2021 and will be available on HBO Max on the same date
source

they already have 2-year-old daughter Aurora

-Production was set to begin this spring
-Mentor Christian Siriano and judges Nina Garcia, Elaine Welteroth and Brandon Maxwell will all be back
-Karlie will make guest appearances, but she just had a baby, which could explain why the show will be host-less
-The last Project Runway finale was aired one (1) day into the COVID-19 pandemic