The Theater Version of #TheSuicideSquad Trailer is COMPLETELY different...and A LOT better! pic.twitter.com/6xQItqasSI

- A new version of The Suicide Squad trailer, played only on theatres has leaked online.
- It has a lot new scenes, different music, it's a completely different trailer... and kinda better. You can see Polkadot man dot's exploding, new shots of Starro, a shirtless Peacemaker, more prison scenes and [Trigger Warning for Annoyance]Nathan Fillion using his detachable arms.
- King Shark remains the best part.

ONTD, are you excited for 'The Suicide Squad'?

It’s no big mystery as to what film is gonna take the lead at the box office this week - Godzilla vs. Kong is already in theaters preparing to stomp all over the (meager) competition. This film is part of the Warner Bros deal with simultaneous theater and HBO premieres, meaning you can watch it either in theaters or at home on HBO Max, which is excellent news for those of us who still aren’t ready to head back to theaters. But what are your other viewing options for this weekend? Read on to find out.

The films listed are from studios other than the “Big Six” - Paramount, Warner Brothers, 20th Century Fox, Universal, Columbia/Sony and Disney. All films listed will be available at their respective sources on Friday unless otherwise noted. Check out the posts from the past few weeks for more movies that may have already come to VOD: March 26th, March 19, and March 12th.

Official video for 'Heartbreak In This City' by Steps which features Michelle Visage. This is taken from their newly announced What the Future Holds Pt. 2 album which will be released in September.

Mark Long Has a "Big, Huge Ultimate Plan" for The Challenge: All Stars and He Told Us All About It https://t.co/01AaWeEqkF

-He was the driving force behind getting this show together.

-Originally wanted it to be called The Challenge: OGs but lost the battle to the network wanting to call it All Stars. They use the term All Stars lightly as it isnt about who's won the most, it's about being memorable, personality, etc...

-Invisions All Stars lasting 8-9 years before they do a crossover with the main Challenge show where its OGs vs. New School (basically all RR/RW stars vs. non RR/RW stars)

-Was originally meant to be a producer of the show but decided he'd rather compete for a couple of seasons before stepping behind the camera.

-Reveals that TJ stated this was the most fun he's had in his Challenge history and that he wanted to save big names like CT, Wes, Bananas for later seasons to allow others to come back and shine.

This was so refreshing and fun!

New Princess of Indie Pop — Olivia Rodrigo — continues the “drivers license” saga with “deja vu.” Rodrigo also announced that her debut album is arriving on May 21st. Are you ready?

Do you call her, almost say my name?
'Cause let's be honest, we kinda do sound the same
Another actress
I hate to think that I was just your type
And I bet that she knows Billy Joel
'Cause you played her "Uptown Girl"
You’re singing it together
Now I bet you even tell her how you love her
In between the chorus and the verse

BTS releases new japanese single. Film Out is the theme song for Signal, the Movie: Cold Case Investigation Unit (in 2018 the band released the opening theme for the series version of the movie: Don't Leave Me). They also announced BTS, The Best - their third japanese compilation album, to be released on June 16.

-Krista Vernoff joined Charmed in Season 3 as a writer and later story editor and co-producer of the show before leaving at the end of Season 5.

-Some notable episodes include Death Takes a Halliwell (where Prue deals with death), Hell Hath No Fury (where Piper deals with her grief surrounding Prues death), Oh My Goddess Pt.1 (where TCO turn into literal gods)

-She was initially excited to join the show because it was a girl power show but Brad Kern took the show for a turn in Season 5 when they decided to dedicate the season to fairy tales and it involved sexxing up the Charmed Ones, specifically Phoebe.

-The Season 5 premiere, A Witches Tail, involved Phoebe Halliwell turning into a mermaid. Once Krista saw Alyssa Milano come out with pasties on it started her questioning herself how much longer she could stick with the show.

-Krista decided to leave the show at the end of Season 5 despite WB trying to entice her to stay by doubling her salary but she turned it down as she didnt agree with the shows direction.

-Holly, Alyssa, Rose have talked in the past how they grew tired of the skimpy outfits and costumes and refused to do storylines later in the shows run that involved them having to do costumes.

The girlies are fighting and audiences are eating it up.

Godzilla vs. Kong debuted yesterday in 2,400 theaters to $9.6 million, the best opening day total for a film released during the pandemic. It will expand to over 3,000 theaters tomorrow in the widest opening yet for a pandemic-era film. The film also recieved an A Cinemascore.

The film looks to be heading way past its initial 5-day estimate of $20-30 million.

No word currently on how many views the film recieved on HBO Max.

ONTD, do you believe him? Do you think James will now stop hanging out with underage tiktokers?

Discuss the insanity that was the midseason finale!

Steven Yeun to Star in Jordan Peele’s Next Movie https://t.co/85uR26dOBN

Per Variety, Steven Yeun is in talks to star in Jordan Peele’s next movie.

Yeun joins Keke Palmer and Daniel Kaluuya in the film. Peele is writing and directing the movie, which is expected to debut on July 22, 2022.

No word on the tile of the movie or the role.

Variety reports that Steven Yeun is in talks to join Keke Palmer and Daniel Kaluuya in Jordan Peele's upcoming film.

They were seen leaving the David Jones department store after a private four-hour shopping spree.

Elsa Pataky is an celebrity ambassador for the department store. 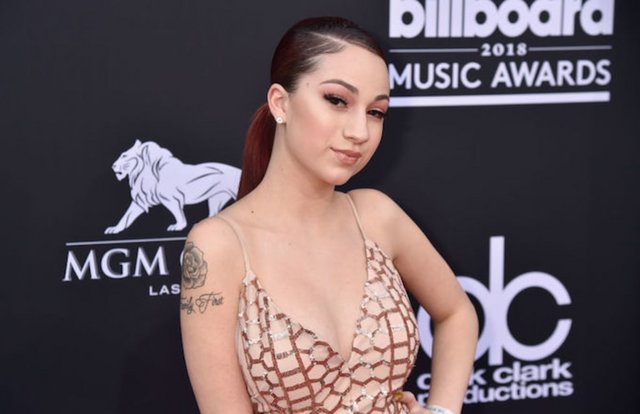 Danielle Bregoli, better known as Bhad Bhabie or the 'Cash Me Outside' girl, announced she now has an OnlyFans account.

After receiving over 6 millions comments all over social media that included encouragement from grown ass adults such as Tana Mongeau and other internet creeps and flops, Danielle uploaded a preview of the content people would be able to see by subscribing to her OnlyFans on Twitter and Instagram. Under those posts, she received even more comments from grown adults congratulating her and asking her to collab.

Danielle turned 18 less than a week ago.

I really hope this is a bad April Fool's joke.

Nicholas Podany joins Chloe Bennet, Dove Cameron, Yana Perrault, and Donald Faison in Powerpuff as Mojo Jojo, known here as Joseph “Jojo” Mondel Jr. He was nerdy, insecure, power-hungry and obsessed with the Powerpuff Girls as a kid despite his father holding a grudge against them. As an adult, he "finds his sweetness and rage in constant battle".

"As part of our DC slate, some legacy development titles including New Gods and The Trench will not be moving forward," Warner Bros. and DC said in a statement. "We thank our partners Ava DuVernay, Tom King, James Wan and Peter Safran for their time and collaboration during this process and look forward to our continued partnership with them on other DC stories. The projects will remain in their skillful hands if they were to move forward in the future."

'The Trench' was to be a horror-themed spinoff to Aquaman but apparently Warner Bros considered the upcoming sequel to be enough. In regards to 'New Gods' it was because it was "complicated by the fact that its villain, Darkseid, just appeared as a major foil in Zack Snyder's Justice League and there was a desire to have space between the latter and any new appearances."

"Tom, I loved writing NEW GODS with you," DuVernay wrote on Twitter, along with a photo of herself with co-writer Tom King. "I’m upset that the saga of Barda, Scott, Granny, Highfather and The Furies ends this way. Diving into Kirby’s Fourth World was the adventure of a lifetime. That can’t be taken away. Thank you for your friendship. And remember... #DarkseidIs"

The song is a defiant motivational anthem appropriately titled Wear It Like A Crown.

Lana's promo for her new record Chemtrails Over The Country Club is out in full force.

By promo of course we mean an assortment of photoshoots for a few magazines.

Check out Lana covering the French and German editions of Rolling Stone as well as the UK mag Music Week.

To think of all the things that still lay ahead back then... but the ache for justice already alive in our eyes. #SVU #OrganizedCrime #TBT pic.twitter.com/HSWcSJTNZP

🤔 I wonder how many ripped from the headlines plots will involve the most corrupt organized crime admin of all time?!

Open to: All, detailed results viewable to: All. Participants: 240

What is your favorite Law & Order franchise?

Whew there have been 1,180 episodes of this franchise‼️

I want to clarify here for Charmed fans and also for my colleagues from Charmed who I love and admire, that I do not believe that the show was bad for the world. I felt that the objectifying notes were bad for the world - and were demoralizing for me. All love to Charmed. https://t.co/IIEqjgIlBp

-Krisa recently gave an interview to HR wherein she talked about her career in Hollywood which happened to include Charmed.

-She stated how the studio wanting the actresses naked more lead to her leaving, you can read more about it here

Also we all chose our outfits or lack thereof. 💯 The WB nor our producers ever controlled us or our choices after season 1. Cuz it was a good year for them. We changed dialogue at will and refused storylines when it was warranted. Our execs will attest to that as well I’m sure.

-No this isnt an April Fools joke...Tyra Banks has launched her own line of Ice Cream better known as SmiZE Cream.

-Comes in 6 different flavors: "Brownies, I Love You", "Caramel Cookie Queen", "Strawberry BirthYAY! Cake", "Purple Cookie Mon-Star & Me", "Salted Caramel King" and "The Best Vanilla I Ever Had".

-Smize Cream will not give you an instant ability to Smize 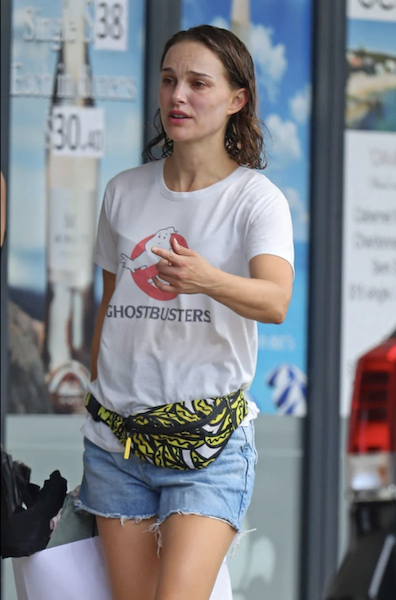 Breaking: Natalie Portman has worn a fanny pack. Unclear whether this was ironic or unironic.

She is in Australia filming Thor: Love and Thunder. While out shopping for some stuff, she wore a fanny pack -- or "bum bag," for you Europeans-- printed with Warhol-esque bananas. Perhaps it was part of a pop-art performance? 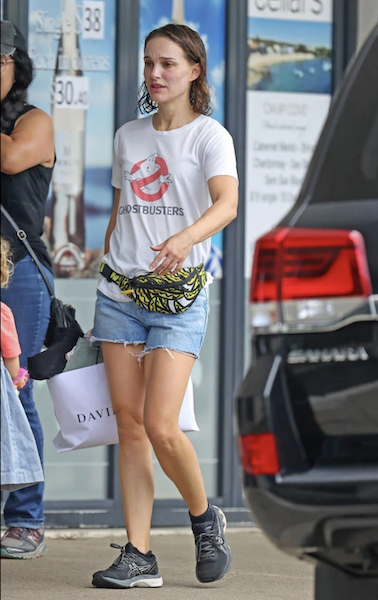 Open to: All, detailed results viewable to: All. Participants: 556

What is a fashion item you love that other people hate?

A Manhattan couple moves to a historic hamlet in the Hudson Valley and come to discover that their marriage has a sinister darkness, one that rivals their new home’s history. Based on the acclaimed novel by Elizabeth Brundage.

From Netflix and Studio Mappa comes Yasuke, an anime series about the real life African slave who was the first non-Japanese man to become a samurai warrior. Created by LeSean Thomas (Adult Swim's Black Dynamite and The Boondocks), the show stars LaKeith Stanfield as Yasuke and is scored by Flying Lotus (who's also an executive producer). Premieres April 29 on Netflix.