running tally on sites who banned or restricted his content:

Grimes says she 'finally' has COVID-19 and is 'weirdly enjoying' all the DayQuil https://t.co/2a9t58oZqV pic.twitter.com/VH4HepnmVf

Grimes revealed on Instagram that she has contracted the coronavirus.

She wrote on her stories, “Finally got Covid but weirdly enjoying the Dayquil fever dream 2021”

She doesn’t mention if Musk or their child X Æ A-Xii were also diagnosed.

In a now deleted Instagram story, another hot take from this heffa- I swear......

Vanessa Kirby is in a familiar position that plagues female performers in Hollywood: overshadowed by the shittiness of their co-star https://t.co/hsD3DTu9eb

The Daily Beast writes about how Shia LaBeouf is tainting his latest movie, 'Pieces of a Woman', and may have potentially ruined Vanessa Kirby's Oscar run as a result.

They also say Kirby wouldn't be able to do a typical press run without it being derailed by questions about LaBeouf.

WW84 spent its third weekend at the top spot with $3 million. So far it has grossed $32.6 million domestically and $131 worldwide.

Internationally, Soul grabbed $8.9 million from 11 countries, with a total so far of $47.3 million. It will soon surpass Finding Dory to take the #3 all-time spot for Pixar in China.

Films coming this week include News of the World, Promising Young Woman, and MLK/FBI on VOD, One Night in Miami on Amazon, HBO Max debuting Anne Hathaway and Chiwetel Ejifor's lockdown heist move Locked Down, and another Liam Neeson action flick in theaters called The Marksman.

- Fez and Jackie from That 70s Show

- Caroline and Alaric from The Vampire Diaries

- Ray and Marnie from Girls

- Lucas and Peyton from One Tree Hill

- Coach and Cece from New Girl

Looking at old posts to remember how to format this one, I discovered they've made this EXACT same post before with pretty much a lot of the same ships and wondered if I was accidentally posting the same one?? Nope it's a different post lol. So if this gets rejected I get it, but if not hey ontd it's Sunday and I'm bored let's talk ships. ✌🏼

My message to my fellow Americans and friends around the world following this week's attack on the Capitol. pic.twitter.com/blOy35LWJ5

▪️ The Terminator gives a heartfelt and personal message where he compares the Capitol rampage to Kristallnacht and the Proud Boys to the Nazis.

▪️ He speaks about being abused by his alcoholic father

▪️ He calls TRE45ON a failed leader, the worst ever, and soon he’ll be as irrelevant as an old tweet

▪️ He does *not* say that wearebetterthanthis™️ Or thisisnotwhoweare ™️

Making history was the first step. Now Harris has an even more monumental task: to help heal a fractured America—and lead it out of crisis. Read the full profile: https://t.co/W5BQPTH7AU pic.twitter.com/OCFvVqTlOk

updated with the official link

So teens think Helen Keller was a fraud...https://t.co/kt6wesL9QJ

This seems to have started on, where else, Tik Tok, where teens are making consipracy videos about Helen Keller being an urban legend

At first I thought they were trolling grandma, which is admittedly fun. But after awhile it was clear they weren't joking.

"How could someone be deaf and blind and learn how to write books?" My nephew admits she probably existed but was probably only one or the other.

No word on when the album will be released but probably within the next month or so!

Some soul compiled the data of all the fanfic written and posted on AO3 in 2020. Come check the statistics ontd, drop fic recs or tell us if you've contributed to it (and be judged accordingly)!

I’m not tryna become the covid police but @VanessaVanjie & @thesilkyganache y’all know better than this SMH 🤦🏼‍♀️ so disappointing. I Hope y’all don’t bring that shit back to LA where 1 in 5 people are testing positive & hospitals are at max capacity turning patients away 😤🙄 https://t.co/FkZeKS9Fbq

Puerto Vallarta in the Mexican state of Jalisco, has become a gay Mecca hotspot and due to the past holidays, it was packed with tourists celebrating the coming of the new year despite the COVID pandemic worldwide.

Among those who celebrated there, were Ru Paul’s drag race’s alums Shangela, Vanjie Mateo and silky ganache, enjoying the music, boys and drinks without any social distance or masks, Farrah moan commented on this by expressing her disappointment on the actions of the queens.

The highly anticipated The North Face x Gucci collaboration lands this week, and everyone wants a piece. https://t.co/URv6i1dWhk

Down-plumped florals are to become all the rage with the highly anticipated The North Face x Gucci collaboration landing this week, and everyone wants a piece. So coveted is the collection that it is only available via virtual appointment between 4 and 31 January, displaying special facades in buildings in London, New York and Shanghai. You can find the nearest “Gucci Pin”, or commercial outlet selling the collection, at Gucci.com; the collection will hit the website on 22 January.

Avatar items inspired by pieces from #TheNorthFacexGucci are on the way! Starting on January 4, T-shirts, hats, and backpacks based on the new collection will be available for a limited time at over 100 PokéStops around the world. Learn more here:https://t.co/rDsptQJMAA pic.twitter.com/QhlZ3nkJb9

And now Pokémon go has announced that for a limited time, items from the collection will be available to customize your trainer, in 100 special poke stops worldwide

Jungkook debuted his new blonde hair at the Golden Disk Awards. Do you like it?

They also performed On, Life Goes On (with instrumental We Are Bulletproof: The Eternal as intro) and a new version of Dynamite.

RUMOR: Krysten Ritter is in talks to reprise her role as Jessica Jones in #DisneyPlus and Marvel’s ‘SHE-HULK’. (Source: @DanielRPK’s Patreon | https://t.co/5VC7iRl05i) pic.twitter.com/mXuDNmOBLL

- Krysten Ritter, who played Jessica Jones for 3 seasons is in talks to reprise her role in the MCU in 'SHE-HULK'.
- The show will be a 30 min legal comedy starring Tatiana Maslany.
- She would be the 2nd Marvel/Netflix star to join the MCU. Charlie Cox is rumoured to reprise his role as Daredevil in the upcoming third installment of Spiderman (supposedly called 'Spiderman: Home Worlds'). No word yet if Marvel has approached Luke Cage or Iron Fist.

Vice President-elect Kamala Harris has landed on the cover of the February issue of Vogue magazine, but her team says the image used isn't what both sides had agreed upon https://t.co/AGpCY03ypq pic.twitter.com/7UCCr8TyhN

Elected Vice President Kamala Harris is on the cover of the february issue of Vogue Magazine, but her team says that's not the shot both parties agreed upon.

Like you can see in the last post, there were 2 covers, one where Harris looks more casual (even wearing sneakers) and another one where she uses a light blue suit, according to the source the cover Kamala's team wanted was the one with the light blue suit.

Vogue released both of the covers online but the photo of the more casual outfit is the one that will be on the printed edition, to the disappointment of Harris .

The cover also generated outrage on social media for how the magazine decided to present the nation's first female vice president on its cover.

Sorry mods, I hope this is better !

‘Sex and the City’ Revival Confirmed at HBO Max https://t.co/Tjax8Fbyi1

The new chapter is titled “And Just Like That…” and will star Sarah Jessica Parker, Cynthia Nixon and Kristin Davis. Kim Cattrall, who played Samantha Jones in the original series, is not returning.

Parker confirmed news on Instagram Sunday with a short teaser:

A few days ago, insta account deuxmoi posted a story with a leaked DM of a celeb's DMs where they referred to someone as "Michael Phelps of sex" - presumably, this story lead to the leaks of more DMs involving Armie Hammer with alleged "several" more kittens that were in a sexual relationship with him. These DMs seem to come from 2 separate accounts, and this thread is from someone who is compiling them as the information comes out. There's screen recordings of the girls' scrolling through the DMs in an effort to prove they are real.

mods I haven't made a post in a minute so please tell me if any of this is wrong/needs fixed! the TW cut seems to work on my browser

UPDATE: I've added the DM screen recording to the source as well as her clarifying the DM where she says it's fake is NOT her

Michael B. Jordan (33) and Lori Harvey (24) have been rumored to be dating since they were seen together on Thanksgiving. As a surprise to many, Michael B. Jordan confirmed speculation by posting an IG photo featuring Lori in front of city lights. Lori followed it up sharing some additional Polaroid photos that appear to have been taken during the holidays.

For those who missed the callbacks and references to the original Karate Kid franchise in Season 3, Netflix has prepared a little video to remind you (they missed've a couple of references too but hey, who's counting).

ONTD, are you still watching Season 3? Are you waiting for Season 4? 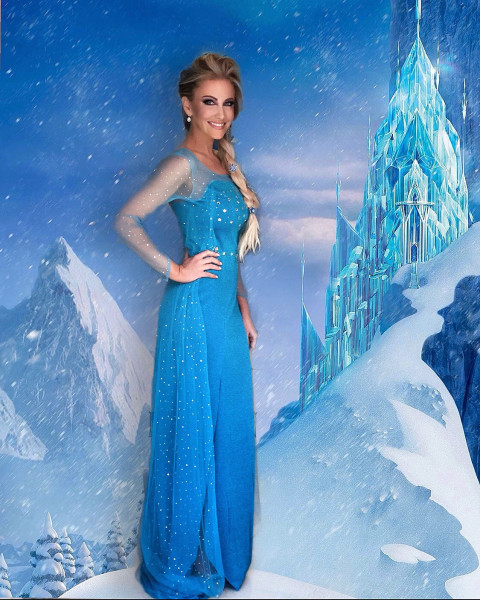 Real Housewives of Dallas' Stephanie Hollman has been a fan favourite since the show first premiered in 2016. Over the past four seasons she has never had a bad edit and is presented as the voice of reason within the cast. If you visit any Real Housewives blogs, social media, forums, etc you will see her described as "a real life Disney princess", "pure", "sweet", "down to earth", "kind", "beautiful inside and out" and other similar things. (This blog post is a great example of the pedestal Stephanie has been placed on by fans.) However, taking a look at her political donations, which are public record via the Federal Election Commision website, show that her political views are in stark contrast with the nice image she likes to portray.

Buzzfeed or whatever big outlets are reading here, I give you permission to lift this story and use my research because I'm sick of her dumb stans and Bravo propping her up as a good person!!!!!!!!

Clarice is a deep dive into the untold personal story of FBI Agent Clarice Starling as she returns to the field in 1993, one year after the events of The Silence of the Lambs. Brilliant and vulnerable, Clarice's bravery gives her an inner light that draws monsters and madmen to her. However, her complex psychological makeup that comes from a challenging childhood empowers her to begin to find her voice while working in a man's world, as well as escape the family secrets that have haunted her throughout her life.