ONTD, what music gets you through the quarantine?

Need to sell these turnips to the stalk market. Who has a good selling price?

How are your turnip prices this week?

Btw, if y’all see Tom Nook 🦝 with a crowbar asking for me, tell him I’m on vacation on ANOTHER island. Kthxbai.

Robert Wagner has long denied rumors that he had something to do with the 1981 death of his wife, Hollywood legend Natalie Wood. However, he recently opened up in an interview with his stepdaughter, Natasha Gregson Wagner, in a new @HBODocs film. https://t.co/ukKJe0sx7w

-The Documentary "Natalie Wood:What remains behind' about "Miracle on 34th st." and "Rebel without a Cause" actress Natalie Wood aired on HBO.

-Never before seen home videos of Wood with her family were shown, and friends remembered what a kind person she was and how she fought to have control of her career, which resulted in her starring in "West Side Story".

-Natasha Gregson Wagner interviews her father about the night Her mother drowned. Wagner says everyone was drunk and he was high,and he and Christopher Walken had been arguing about Wood continuing to act. Wagner says he told Walken to stay out of his life. Wagner says he broke a wine bottle as he berated Walken, who he says went back to his room on the boat.Wagner says he and the caption cleaned up the glass.Wagner says he called the shore patrol and the coast guard when he realized Natalie was not on the boat.

-Gregson Wagner" It's important to me, Daddy,that people think of you the way I know that you are and it bothers me that anyone would ever think that you would be involved in what happened to her because you would've given your life for my mom." Robert Wagner"That's true, I would've ."

-Woods younger sister Lana , who has maintained that Wagnar had a hand in her sisters death is spoken of disdainfully in the film.Wood's youngest daughter Courtney on her aunt"I don't even think she believes what she is saying." Gregson Wagner"Shes literally accused my dad of killing my mom, When that's the farthest thing from the truth."

-Actor Christopher Walken was not interviewed, but in the past he has spoken about the night on "Entertainment Tonight" in 1983 when he was doing press for the film "Brainstorm" which would be Wood's last film. Walken"The Real story of her death is that she drowned. Nobody knows how she drowned or what happened except her.That's what it is.There is no'real story.' Nobody will ever know. Walken with "People" magazine in 1986.: Walken"I don't know what happened. She slipped and fell in some water.I was in bed then.It was a terrible thing. Look,we're in a conversation I won't have. It's a fxxxing bore." Lastly an interview with"Playboy" in 1997.:Walken"Anybody there saw the logistics-of the boat, the night,where we were, that it was raining-and would know exactly what happened.You hear about things happening to people and they die.You feel you want to die making an effort at something; You don't want to die in some unnecessary way. What happened that night only she knows because she was alone."

Few things are as intoxicating as a Hollywood mystery, and a new documentary about Natalie Wood exacerbates renewed speculation about her shocking death, in 1981.https://t.co/3BiAFBfBQr

Dedicated to @justintimberlake and the white artists showing "solidarity" posting about #ahmaudarbery but closing their comments/IG replies. Ain't no half steppin. This is how you ally. You get in the weeds with your fans who are also fans of racist rhetoric. #TURNEMON

This is in response to Timberlake's post featuring a black and white photo of Arbery smiling and a caption that read, “If you’re not outraged, you should be. Justice for #AhmaudArbery.” He turned off the comments for the post. All of his other posts have comments enabled.

Maxi Challenge: One-Queen Show where the queens will perform live on stage as either themselves or playing character/s.

stan Jaida, the essence of beauty!

Katy ~realizes things~ about her life and career, while the aftermath of Pepper's doings plays out.

ONTD, will you be watching to see if Annalise gets away with murder?

Lmao. No throwing up. But nausea and peeing non stop. Omg what do u think this means guys???? Lmaooooooooooo https://t.co/NLxdgw01fD


*On Thursday, Nicki posted a couple of questionable tweets alluding to pregnancy.

*Nicki is known to troll but has been open with her desire to settle down and have a family.

*Nicki's husband is Kenneth Petty - a convicted felon who is currently facing 10 years in federal prison for failing to register as a sex offender in California.

So Truth or Troll?
[My guess]

- She's a space adventurer and comes up against a giant robot foe!
- There's a Magical Girl transformation
- Dua's Break the Ice?

Demi Lovato joined Tori Kelly for her Instagram Live Chat sessions where the duo discussed various times they've met, being a part of the same management company now, how they'd like to record together and Tori's reaction to Demi's performance of "Stone Cold" at the Billboard's Women in Music (1) (which you can see here, Tori's reaction is shown during Demi's performance:)

The two also perform two acapella duets of two of Demi's songs, "Stone Cold" and "Sorry Not Sorry," in which they proceed to fangirl like crazy over one another. It's really cute.

(This is something Tori is regularly doing. She's had Jessie J on in the past. I think she sings the songs of her guests every time. I only watched this one with Demi.)

Little Richard, one of rock's founding fathers who set the template that generations of musicians would follow, has died at 87 https://t.co/nwu9qMA9wf


Richard Wayne Penniman, rock and roll pioneer and gay legend has passed at 87. Cause of death is reported as unknown.

Take some time from hitting rocks to read this post!

Some species aren't mentioned - Bulls, Ostriches, the sparrow-like birds, Kangaroos - Because there are no good ones. Sorry, I make the rules.
( Collapse )
Who is in your town?
source: Nookipedia for the image, Nintendo for the characters

It was either this or medical school.
@YvonneOrji: #MommaIMadeIt premieres Saturday, June 6 at 10 pm. pic.twitter.com/xgvur2iM0W

Insecure’s Yvonne Orji’s comedy special will premiere on June 6 10pm ET on HBO. Momma, I Made It! was written, performed and executive-produced by Orji.

Y'all!! THINGS JUST GOT REAL!! @HBO dun let ya'gurl travel back to Lagos and the DMV to PUT ON for my cities in a major way and you all get to see the hilarity unfold in my first HBO comedy special on June 6th. Let's GHOOOOOOOOOO!!!!! pic.twitter.com/6zzAp9drR3

Neil Gaiman just posted this on Goodreads and I am simply! blown away. A breathtaking, innovative, perfect escalation of the online conflict pic.twitter.com/dj8k7TV8Y2 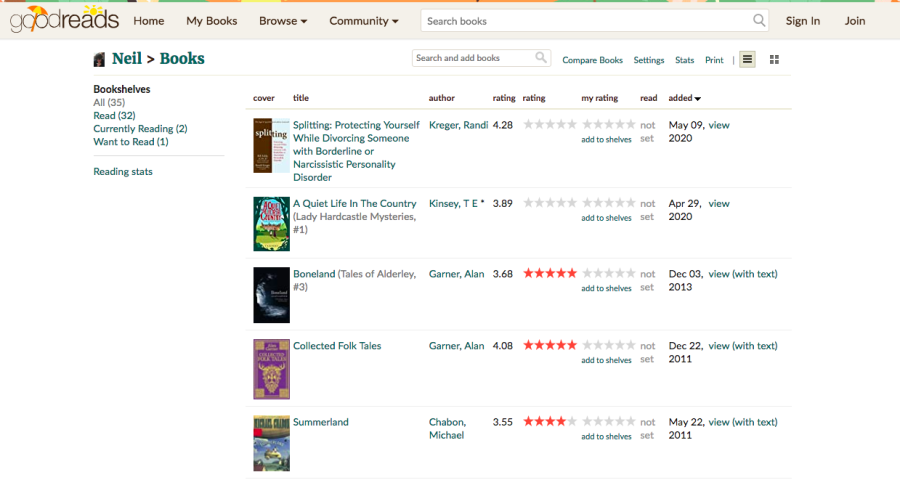 Source: Twitter and my own eyeballs [the screenshot is my own]

ETA: Neil has removed the book from his list. A couple commenters pointed out that Kindle may auto-upload to Goodreads (both are owned by Amazon), so this might have been unintentional. Nevertheless....YIKES.

ETA2: Neil claims hacking on his Goodreads account that he hasn't done "anything with for a long time." (Which doesn't really track since he has another book update from ten days ago, but okay):

HBO Press Release:
The show finds Busey settling disputes between aggrieved pet owners, the cases will revolve around a veritable menagerie of animals including monkeys, goats, birds, dogs, meerkats, turtles, robot raccoons and more.” The statement continues: “Is Gary Busey a real judge? Absolutely not. Does he know anything about pet law? Probably not. Can he look into your soul and suss out your spirit animal while delivering a verdict with a trademark Buseyism? You bet your sweet ass (the donkey kind).

the quarantine show we deserve???

During these lockdown many people have taken to gardening and tending their plants, so up and coming NYC based DJ, was interviewed to share his tips on taking care of his plants and life lessons he has learned by doing so.

He shares that gardening is a perfect distraction and helps bring life to a desolate looking apartment; in plants, like any kind of relationship, you have to get rid off pests that wither both your plants and your bonds with your friends/SO/family.

Do you have/like plants in your space?

Some thought it was a glitch, but Brit took to Instagram to confirm that the change was indeed official and intended as a thank you for the #justiceforGlory fan campaign that was launched earlier this week.

But that's not all! Some more unused cover mock ups leaked yesterday from a different shoot. Truly a glorious day for Britney fans.

This is the glow up of the decade ✨ pic.twitter.com/5Mu4LwhWV7

How are you relaxing this weekend, ONTD?

BY POLL VOTE, THIS IS A DOUBLES WEEKEND, SO JOIN US TONIGHT at 9 PM (WE'VE JUST STARTED AT 9:45 PM EST, IT'S NOT TOO LATE TO JOIN US!) TO WATCH INCEPTION!

This week we're watching films featured on the Blank Check With Griffin and David Podcast - which covers "entire filmographies of directors who have a huge massive success early on and then are given a so-called blank check to work on whatever passion project they want. Sometimes those checks clear and sometimes they bounce, babyyyy!"

Working on a poll for users to vote for our next movie night selection & date/time.Next week's theme TBD!

Youtuber Karsten Runquist goes through Ansel Elgort's filmography. Because he likes him for some reason. So I'm posting this to a community that likes him too. For some reason.


Andre Harrell started out as half of the early-80s hip-hop duo Dr Jekyll and Mr Hyde but was best known for schooling an intern, Sean “Puff Daddy” Combs, in the music business.

ty for your patience mods! my lj is fucking up and idk why!

Rocco Ritchie looks like Oliver Twist in a vintage ensemble as he takes a bike ride through central London https://t.co/dxZcReyN1B

Madonna' son was papped dressed in a vintage ensemble. The DM says he looks like Oliver Twist

He is enrolled into a fine art degree at a college in London. Accordinf to an insider: 'He's proved his dedication by attending all his classes and throwing himself into studying"


-The Disney Sing Along Volume II premiers Sunday at 7:00 on Eastern time.

For the first time in forever ❄️ you can give a little whistle 🐳 and discover a whole new world 🌎 during #DisneyFamilySingalong: Volume II, TOMORROW at 7|6c on ABC! pic.twitter.com/xQ9cUQJBa4

'Saturday Night Live's season finale is tonight - yes earlier than usual - and is the third 'stay at home' edition. This will have another surprise host and musical guest (previous were Tom Hanks, Brad Pitt, Chris Martin, and Miley Cyrus).