"Lean on Me" by Bill Withers covered by the following singers in order to raise funds for COVID-19:

Also feautured in the video is Justin Trudeau, Prime Minister of Canada.

Coming to HBO this August
pic.twitter.com/zoloiQlZcR

First trailer for a new HBO series loosely based on the works of HP Lovecraft, the classic author of cosmic horror and eldritch nightmares, has been released, titled Lovecraft country, it is coming on August under the wing of Jordan Peele and JJ Abrams.

Do you enjoy cosmic horror literature or films, ONTD?

Below a look from #ValentinoPreFall20 Women’s collection and the code. pic.twitter.com/m6rEebGRLL

Thailand’s king is whooping it up in the Alps in a luxury hotel with a harem of 20 women while his countrymen grapple with coronavirus.

But Thai residents who dare express criticism of their leader face potentially lengthy prison terms of up to 15 years.https://t.co/eYvxTA645O

King Maha Vajiralongkorn is chilling in a luxury hotel nestled in the Bavarian Alps in Germany.

But the monarch is not alone at the Grand Hotel Sonnenbichl in scenic Garmisch-Partenkirchen. He has a royal entourage of 100 including his harem of at least 20 women.

Since late March, German media reported the king flitting about Dresden, Leipzig and Hanover in his private Boeing 737.

“The king’s behavior during the coronavirus crisis has been a disaster for the reputation of the Thai monarchy” states an activist, while Thai residents who dare express criticism face potentially prison terms of up to 15 years. There have been numerous cases of citizens being jailed for several years just for posting negative posts about the royal on social media. “What do we need a king for?” has been trending online due to his behavior.

Famous stuntwoman and actress Zoe Bell created this fun video featuring many Hollywood actresses and their stunt doubles, including:

How long until men start whining or Ryan Reynolds tries to do his own?

-The Montreal band that brought you songs like "Here's To The Death of All The Romance" and "I'm Sorry That I Wished You Dead" have released a third single from their upcoming album, Lover's Rock
-Lover's Rock is coming out on May 15th
-Videos for the first two singles "The Worst In Us" and "Heart of an Animal" are below

Who are your favourite non-Bieber Canadian musicians? 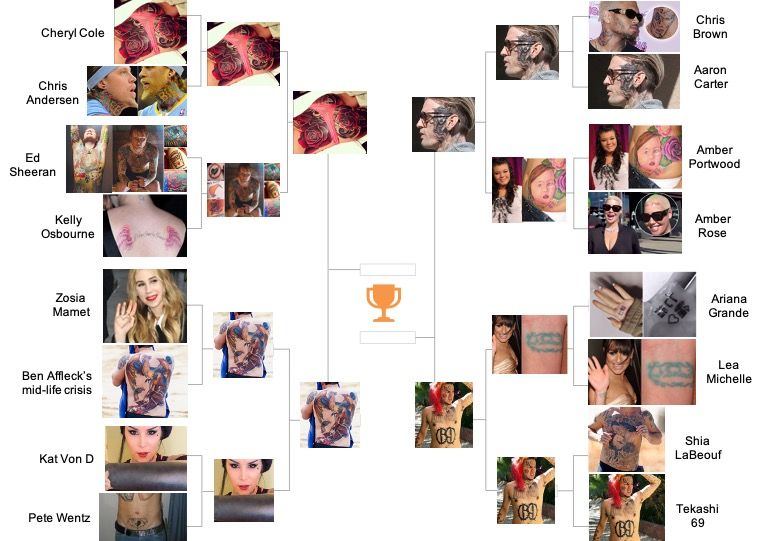 ONTD i cannot believe that cheryl beat whatever the fuck is growing on ed shereen!!! the injustice!!! i was rooting for you!! how dare you!!!!

alright, with that off my chest, please enjoy this week's match-up as we get closer and closer to crowning the ugliest....

thank you as always to

irajaxon for making the bracket. ontd, are you also feeling defeated by the ugly? do you have any not ugly tattoos?

Could you imagine JJ as John B.? Well, it almost happened. #OuterBanks https://t.co/77uBWciiu2

-Rudy Pankow (who plays JJ) originally read for John B. and Rafe's roles
-Showrunners didn't know which role to give him but said he'd end up as 1 of the 3
-He's happy he landed JJ because it's a deeper role and there's still more to learn about him
-He hopes JJ gets a dog and some romance if there is a second season

ONTD, have you been watching this?

Mariah Carey and Britney Spears are #1 and #2 on the US ITunes Pop Chart! As they should. #JusticeForGlory pic.twitter.com/MuTPvWhLpK

Living Legends Britney Spears and Mariah Carey are getting their justice for Glory (2016) and Charmbracelet (2002) on the iTunes Pop album chart. Both peaked at no. 1 and 2 and as of this posting remain in the top 10 of the overall iTunes album chart.

What are your favorite songs off Glory and Charmbracelet?

Hey @mindykaling woke at 2:30am due to corones panic and watch all 10 eps of @neverhaveiever Loved it!!!

Several people online (including celebs) are raving over Netflix’s latest hit: Never Have I Ever. The show was executive produced by Mindy Kaling and has been the no. 1 most watched show on Netflix worldwide. I think it’s safe to say a season 2 is guaranteed. As of this post, the show has a 97% Fresh Rating on RottenTomatoes.Com.

I was so excited to recommend this funny, heartfelt, intelligent, unpredictable and inspired little TV show that my friend made... then found out it’s, like, literally the most popular shown in the fuckin’ world. Congrats @mindykaling @loulielang @neverhaveiever pic.twitter.com/kcFZwFWJK8

The Fourth is strong with this one. Not social distancing would be a wookie error. #MayThe4th pic.twitter.com/gCG9TkWgRe

Watch the (current) series finale of The Clone Wars. Again, some people have already done so, so be cautious out there! There will be an interview with Dave Filoni on Good Morning America on Monday!


Other things you can do that are not quite as fun but still Star Wars related:

The mayor of Houston will be presenting @theestallion & @Beyonce with their OWN OFFICIAL DAYS in the city following the release of #SavageRemix and their continuous contributions to help uplift the city during this time!

Congratulations, @theestallion we’re SO HAPPY FOR YOU! 😭 pic.twitter.com/Pd09OHv7Du


- The Mayor of Houston Texas tweeted that Beyonce and Megan Thee Stallion will be presented with their own Official days.

-Mayor Sylvester Turner stated that due to both artists contributions and uplifting the city , they would receive the honor.

-Proceeds from the new single will support the organization Bread for Life.


Ontd:Do any of your favs have their own day/ key to the city?

Join Claire Saffitz, Brad Leone, Chris Morocco, Molly Baz, Andy Baraghani, Sohla El-Waylly, Priya Krishna and Carla Lalli Music as they share their favorite ways to spice up boxed macaroni & cheese. Throw a little fermented garlic-ginger paste in there, whydon'tya. Or pop some panko upon that pasta. You can't go wrong with any of these recipes.

Do you like Mac & cheese?? Do you cook you own food or do you eat a lot of pre-cooked/frozen melas (or meals like instant ramen or fast food)??

-Texas will be partially lifting lockdown, which will include opening non-essential business like movie theaters

-EVo Entertainment will open 2 location on Monday.CEO Mitchell Roberts:Guests will be ferried through a cordoned area in the front door, will be asked if anyone in their household has had flu like symptoms in the last 14 days, and will be subjected to an infrared temperature screening. Anyone with a temperature above 100.4 will be turned away.

-Films like 'Sonic the Hedgehog an "The Goonies" will be filmed. No refills will be given and salt and pepper packets will be used.

...and it's a flawless gem of a movie, currently ranking at 94% on Rotten Tomatoes!

New York Times: By exploring issues of race and queerness with emotional complexity, it treats teenagers with the sophistication they deserve. (...) Wu’s feature debut, “Saving Face” (2005), was one of the rare films to focus on the queer Asian-American experience. Now, “The Half of It” reflects sharpened ideas and a honed directorial voice.

Screen it!: Maybe the offering simply caught me at the right moment of wanting some ray of sunshine in our current bleak world, but I loved every minute of it. Funny, charming, heartfelt, and delightful, it also touches on some deeper thematic material regarding teens, immigrants, and sexual orientation.

Vulture: It’s yet another riff on Edmond Rostand’s Cyrano de Bergerac, one of the most overused comic-romantic prototypes of all time, but it’s so tenderhearted and transporting, its characters so likable, that you can’t help but want to give the movie and everyone in it a big hug. (...) We get so involved in the airy perfection of this correspondence and all that it opens up that the duplicity slips away and the human connection becomes downright metaphysical, a precocious teen’s dream of a better world. As filmed by Wu, the screen lights up with ornate words, pictures, and text messages, all of it contributing to a kind of dream life, one where these people’s words help transcend their mundane, dead-end milieu.
( Collapse )

Each section will have selections of new content including RT [Rotten Tomatoes] and Metacritic, plus source for full list

*Films selected randomly though I picked some older ones in case you never saw them.

Ontd what are you looking forward to watching this month?

You Tube source links with each video

Spoilers under the Spoiler cut

-Winsberg wanted the episode to honor his dad who died from the rare disease. He says a hospice worker told his family his dad was going to die that day and left. The family had a living vigil for his father and he always wanted to show the reality of that on the show.

-They are talking about having Gallagher back here and there in flashbacks or dream sequences,but not as an everyday presence .

-He likes the simon/ Max saga to be ongoing and to not have either be good or bad for zoey.

We're still ugly crying over the #ZoeysPlaylist finale!😭Creator @AustinWinsberg breaks down the season's final episode and how it sets up an even more emotional season 2. https://t.co/uukrCKvfvf

-Issa gets ready for the block party.

New York City's Makeup Museum was expected to open on May 1, but obviously has been delayed indefinitely. The first exhibit is called "Pink Jungle: 1950s Makeup in America" and features a prescription famed dermatologist Dr. Erno Laszlo gave to Marilyn Monroe.

In addition to a very strict regimen of his products, including different skincare instructions for normal nights and formal nights, he also told her to avoid all nuts, chocolate, olives, oysters, and clams. Marilyn apparently had drier skin so her skincare routine involved oil cleansers and lots of creams. Erno Laszlo's line is still available, as are many of the products Monroe used. The company even re-released the "Normalizer Shake-It" ahead of the launch for the exhibit.

Dun Dun, Christopher Meloni Will Star In The "Law And Order: SVU" Premiere Ahead Of His Spinoff Show https://t.co/UcCnuBK21Z

We still don’t know much about Stabler’s Law & Order spin-off, but showrunner Warren Leight revealed that Stabler will appear in the first episode of SVU’s next season. Apparently he was supposed to show up in season 21’s finale together with his family, but then the coronavirus happened and production was shut down. It’s not clear yet if Stabler will return with or without his family, but who cares tbh! We’re finally getting the Olivia/Elliot reunion we deserve!