Shirtless Shia LaBeouf sports a wedding ring and cozies up to a mystery blonde https://t.co/qEP7vzrhEb pic.twitter.com/4ThzrDs7Z0

but the real star of these pics is THAT TATTOO

The #Riverdale musical episode “Chapter Seventy-Four: Wicked Little Town” has been delayed for the time being and will not be airing in April 8th. It is unknown when the episode (4x17) will be airing. pic.twitter.com/2PbOtYUHzE

The musical episode, Wicked Little Town, has been removed from when it was originally supposed to air (April 8) and is most likely being postponed until May Sweeps. The show was in the middle of filming it's 20th episode before shutting down due to concerns over the coronavirus and a team member coming in contact with someone who tested positive.

Overall, the CW is airing repeats of other shows in April and will most likely hold remaining new episodes for May sweeps.
------
[Vanessa and her Lysol Wipes Birthday Cake]Vanessa celebrated her birthday last week at home with just herself and her husband and this completely edible cake.

------
[Swimming Lessons Poetry Book by Lili Delayed]Lili's book of poems, Swimming Lessons, was originally going to come out May 5 but is being pushed back to the Fall during the current state of things. She also encourages people to maybe meditate or turn to something creative during this time. And if you're a fan of her poems, then don't worry, she's also taking the time to compose some new material.

------
[Cole Photoshoot for Elle and Possible Project with Brother Dylan]Pre-lockdown, Cole was hired by Elle for a photoshoot with additional classic Cole word salad

Dylan talking about working on a project with Cole: https://t.co/qGSTlfYi9f pic.twitter.com/LzfdCQFxtN

------
[I Still Believe on VOD and KJ Hanging Out with Girlfriend]Future Best Actor/Best Song shortlist nominee on account of the lack of films in theaters, I Still Believe is now available on VOD

I know a lot of you guys missed @istillbelieve in theaters. But it’s now available on VOD - appletv, Amazon, prime video, google play and other cable providers. Go enjoy!

He and model girlfriend Clara Berry also still hang out together

------
[Charles Melton and His Daily IG Lives]Charles and Drew are rooming together (??), and Melton goes on IG Live every day and sometimes does workouts. This video is an example of the more mundane aspects of his constant IG Lives

------
[Camila Fosters a Dog]Camila mid quarantine after a close friend tested positive, posted about fostering a dog and encourages others to do so

More recently, she's posted on her IG stories about doing a puzzle and pondering shaving her legs along with her "quarantine homie"

------
[Text Casey]Casey has been with his family in Pennsylvania. He recently went on a walk with his siblings on a public trail and also posted a number [1 (917) 540-6055] (?!?!?) where one can text him if one wants to talk to him about anything (this is your chance, alienjive/stewie)

Open to: All, detailed results viewable to: All. Participants: 155

** Though he admits to meth use previously, claims his teeth were messed up before that due to genetic reasons. Has been clean for 6 years.

Youtube channel RE:Anime recreates AtLA's iconic Agni Kai between Azula and Zuko. A moment fans had been waiting for since season 2. With a few minor changes and a twist~ ending it's actually not bad considering. The actress, Nikki Soohoo, who plays Azula is a stand out.

Alicia Keys Reveals Her Lifelong Struggle to Find Herself in New Book: 'I've Been Putting on a Mask' https://t.co/AAuqcN5M5F


- Alicia Keys spoke to 'People' magazine about her upcoming book"More Myself: A Journey".

-Keys on how she felt she was living inauthentically.Keys "I was building my life around this image of perfection,and it was really oppressive. I was clearly a woman who wanted to talk about truth and empowerment and strength,but when I really looked at myself, I realized that my whole life I've kind of been putting on a mask".

-Keys on how her father's absence in her life affected her life. Keys"For me, a seed of worthlessness was planted in my childhood.As well-intentioned as Craig(Keys father) was, and as much as he was dealing with his own life, his absence impacted me in ways I'm still uncovering. it left a hole in me'.

-Keys on how her mother helped her with questions of race. Keys"Race was never a part of what made me feel guarded."You're the best of both worlds" my mother would often remind me. yet since my mother understood America would compel me to choose,she raised me with an awareness that's still intact. I am a Black girl".

-Keys on feeling exploited during her first photo shoot. Keys"Open up your shirt a little,[the photographer] directs while firing off a flurry of snaps. my spirit is screaming that something is wrong,that this feels slimy."Pull the top of your jeans down a bit in the front" he urges. I swallow my misgivings,tuck my thumb between the denim and my skin,and obey. I pass a newstand where the magazine is on display. I almost throw up".(Note:Keys is most likely speaking of the 2001 cover of"Dazed and Confused" where alleged abuser Terry Richardson was the photographer)


-Keys on her struggle with insecurity.Keys"There had been one afternoon, as I was preparing to pick up my son from school,i threw on some sweatpants and a baseball cap as an internal deliberation arose:'What if someone sees me like this and asks to take a photo? What if that picture gets posted? The dialogue wasn't new. On this day, I caught myself in the middle of the neurosis, and it socked me right in the gut".

-Keys on the masks she's worn. Keys" I wasn't fake, but I was trying to live up to all these fake ideals. it was like a habit. I had to break it. I feel more like an open book. That's a beautiful thing".

Pollstar has released a chart ranking female concert draws from 2000-2020, listing GROSS, TICKETS SOLD and NUMBER OF SHOWS. No surprised, Madonna reigns supreme by a lot with highest gross and most tickets sold (very close to 10 million!). Only three women broke the billion-dollar mark (Madonna, Céline Dion and Beyoncé), only one woman sold fewer than a million tickets but still made the list (Barbra Streisand, all the way up at #12) and Streisand and the Spice Girls performed the smallest number of shows and still made the list (69 and 58, respectively)

#GameStop Tells Employees to Wrap Hands in Bags and Get Back to Workhttps://t.co/d7lL1IRFlB pic.twitter.com/mK1sR61anQ

Another day, another "GameStop is a horrible company" story. This one comes from Massachusetts, a state that has closed all nonessential businesses (which doesn't stop GS ofc).

The company provided local Boston store managers instructions via email on how they should handle business, and it's a real doozy. The company explains that no one should be allowed inside, that employees are to place a plastic bag over their hands to take the credit card payment for customers waiting outside, flip the bag over when finished, place the credit card and product purchased inside the bag, and then slightly open the door and give the customer their purchase.

A local manager who exposed the practice said it treated customers like animals. GameStop released a statement saying stores are still open to process their new curbside delivery service.

Nonessential businesses that are still open in MA face $300 fines every time they are caught violating the order. 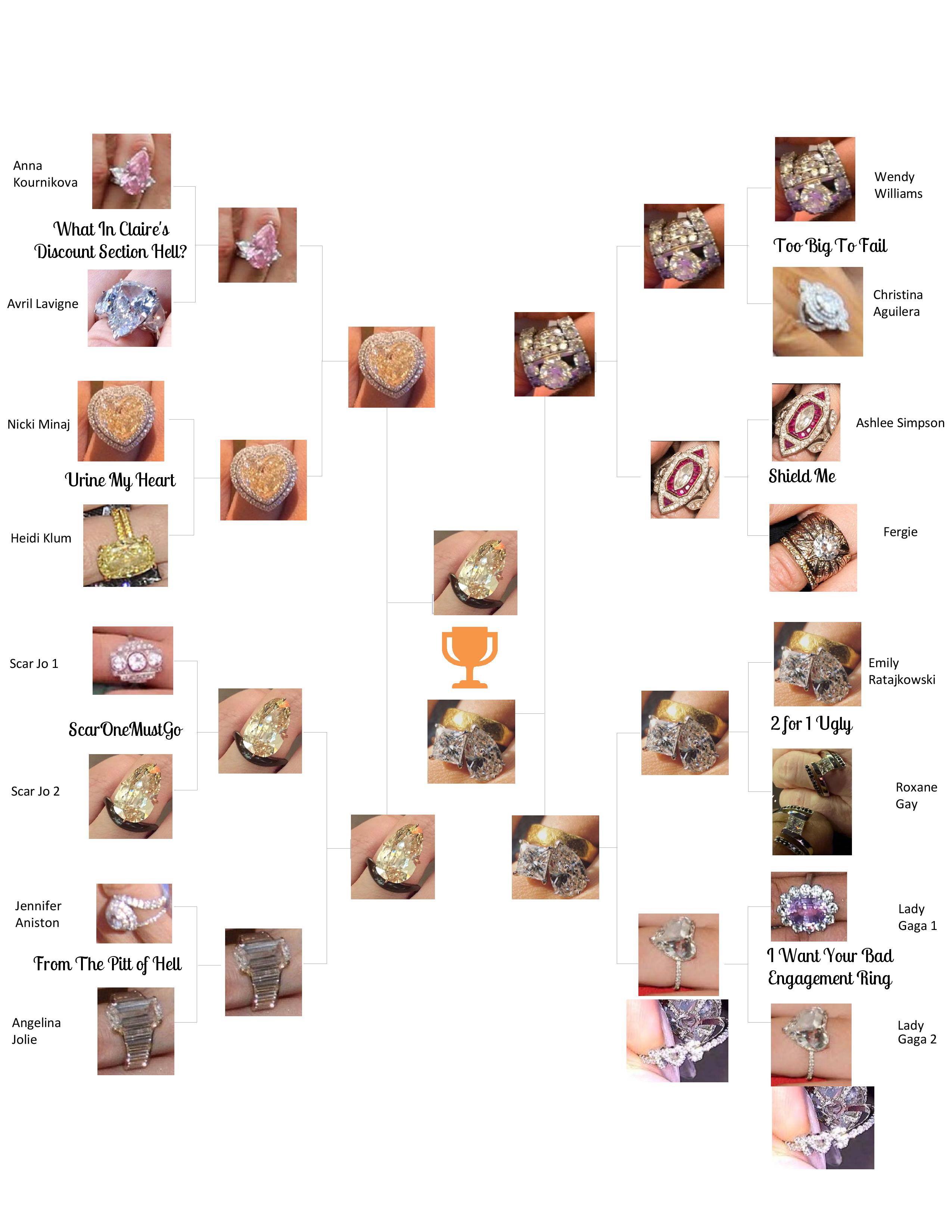 ONTD, it is time, time to pick the winner (loser?) of the 💍NTD 💍riginal: Ugliest Engagement Rings Tournament.

Open to: All, detailed results viewable to: All. Participants: 1230

The results will be announced on March 31st so get voting! I think we all need a major palate cleanser at this point, so please feel free to post your dream engagement ring (or your actual ring ONTD Marrieds! We promise to be...nice)

now he is married to Blair Waldorf and she is dating Bill Hader, so things worked out fine

It’s been almost three years since I first exposed occasional singer and retired actor Harry Edward Styles, 26 [citation needed], for the fashion thief that he is. First by eXposing him for stealing fashion cues from Brandon Flowers (2017). One year later by stealing fashion looks from a muppet and Icon, Gonzo (2018). And now? Mexican singer-songwriter and LEYENDA JuanGa aka Juan Gabriel. Que en paz descanse.

At this point I’m not even stunned he continues to steal from others unscathed. I just didn’t think Garry could stoop any lower than to steal from a Puppet of Color like Gonzo. But I was wrong. Taking from the dead, a new low even for Garry. But not uncommon. Thanks to this Twitter thread and

ohmylol, this was brought to my attention. You already know the drill here, we will rate the fashion theft and looks.

"The actors are working together for the first time since they married 23 years ago in the (now-delayed) return to Broadway of Neil Simon's "Plaza Suite." Jane Pauley sits down with Sarah Jessica Parker and Matthew Broderick to talk about playing a couple on stage, and whether Carrie Bradshaw and Ferris Bueller would have dated."

Let us know where you will be watching our iHeartRadio Living Room Concert For America TONIGHT by using #iHeartConcertonFOX! ❤️ pic.twitter.com/hBSm3byay8

It supports Feeding America, as we all know, the government? With social services in place to help citizens? Fuck outta here. That's up to private citizens to be good people.

An excuse to shittalk Camila a live post tbh.

You may also be able to watch it HERE, if you're in the states, and it's on your Fox Affiliate program in about 50 minutes.

tested positive for having a fat ass 😰

The girls are fighting! Yesterday a feud between the two ignited on Twitter. It all started with a tweet by James Charles, which many people in the replies, including the Drag Race alum and All Star winner Trinity “The Tuck” Taylor, found offensive and insensitive in light of the ongoing Coronavirus pandemic.

Damn, she must’ve mistook the lumpy silicone in your face as Braille instead of reading my actual test results 😢 My mistake.... speaking of mistakes, how’s your crown?

Dear @NPR — uhh hey hi THIS IS A PIRATE WEBSITE. It’s not legit! WTF are you doing?! pic.twitter.com/Nmioke4aQK

As there seem to be a lot of people confused about this — an website giving away people’s books for free is not a library even if it calls itself one. It isn’t even *like* a library. Libraries *pay* for their books.

-Zoey tries to help her father's caregiver reconnect with his daughter.

-"Zoey's Extraordinary Playlist" episodes are streaming on NBC for free with commercials.

The American songrwiters and producers behind some of the biggest KPOP hits of recent years were asked their opinions on the difference between Korean and American pop, as well as their thoughts on cultural appropriation and racism in the industry. Here are the artists/writers and some quotes from the interviews: 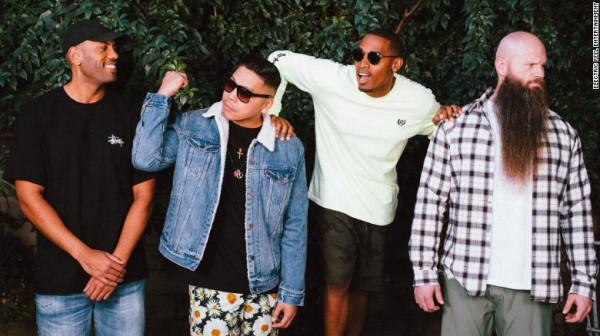 No wonder kpop songs always seemed too busy for me! Has anyone else heard about this connection to jazz music?