Mayor of Flavortown Guy Fieri and the National Restaurant Association Educational Foundation have launched the Restaurant Employee Relief Fund. This fund will offer restaurant employees who are currently out-of-work due to the coronavirus a one-time $500 check. Anyone who wants to apply or donate can do so at https://www.rerf.us.

Applications will open on April 2, and payments should start going out soon after.


-After receiving distressing news, Zoey suffers a mysterious "glitch" in her powers.

-Palmer on her "Sorry to this man" meme. Palmer "It was like a perfect little soundbite that people could add to a million different stories. That's why I say our generation inspires me so much. The voice. The creativity. I mean it's masterful. They give it life"

-Palmer on dating. Palmer " I've always had the same philosophy when it comes to dating, Not that I wouldn't give someone a try.But trying to keep my private life outside of my work life ,to me, is easiest when you don't date someone with the same career".

- Palmer on a pitfall of fame. Palmer" I think a lot about,like, Does this person really like me?And it's not just romantic relationships. It's friends too. that wavering, that's the most traumatic thing about fame. and that can really tear at your self esteem if you let it.Cause the reality is you really might be a great person, you might be that fun, that lovable,but because your always having to protect yourself from what people may want from you, you can't embrace the fact that maybe it's all true".


It’s more important than ever to surround yourself with light and positivity during this time of crisis, and that’s why we’re excited to introduce to you our spring digital cover star, @KekePalmer! https://t.co/TgSjbzNagi

Holed up? Nothing to do? A Nintendo Switch on its way in the mail? Here are some highly recommended and inexpensive indie games which you'll be able to finish in a session or two and that are quality enough for the experienced gamer while non-challenging enough to appeal to a casual looking to waste some time. All prices are obviously at the time of writing.

What remains of Edith Finch

You play as Edith, a young girl roaming through her eccentric family home, uncovering the tragic ends of her other family members. This game is a staggeringly original way to tell a beautiful and very sad story, it's a genuinely moving, magical and at times shocking experience. I GASPED more than once. It's basically an interactive movie so it requires very little skill.
Price: $13.99

Stan Annapurna Interactive I guess? What are you playing right now?

The series finale airs next week.

Ryan Gosling is going back to space! After fucking off for a two year hiatus, Ryan Gosling's first role back appears to be for Andy Weir's The Martian follow-up, Project Hail Mary. Gosling will also be producing.

The film is a solitary tale of an astronaut on a space ship who is tasked with saving the planet. There are apparently some serious twists and turns which shouldn't be spoiled, and the book itself will be released in Spring 2021.

Ryan's last film appearance was in 2018's Neil Armstrong biopic First Man, and he was being pursued for Marvel, DC and several reboots.

Meanwhile, unlike Ben Affleck, Katie Holmes, Ana de Armas and Mark Wahlberg, Ryan Gosling's lady Eva Mendes is keeping her ass in the house AS ONE SHOULD, but she has taken to Instagram to show her quarantine vibe: 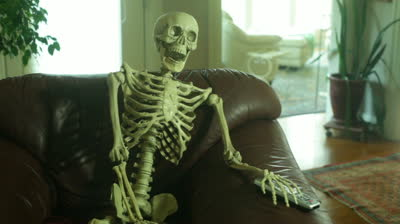 Shortly after the release of Bad Bunny's music video for "Yo Perreo Sola" featuring him dressed in full drag, Anuel took to Instagram Stories to say the following, leading people to speculate it as a response to Bad Bunny and the video:

“I don’t want friends in the industry...you guys are weird as hell, fools & hypocrites. I cant go against my morals for business! Im tired of masks, dont get close to me in any place y’all see me” pic.twitter.com/tUtux8jxt2


Enjoy the visual and representation! We stan an LGBTQ+ ally!


ONTD, what are your current faves off of YHLQMDLG?

On the premiere of Keeping Up with the Kardashians Kim and Kourtney got into a physical fight about Kourt's work ethic or something.

Kourtney made it clear that she's over filming the show and was complaining about having to pay for her own trip to Costa Rica: "Why am I being sent this other huge bill? Why isn’t production chipping in if we’re using it for the show?"


It is from our darker moments where growth happens. ✨🙏🏼 https://t.co/cm5kEOUJJl


Do you remember how many times Kourtney threatened to quit, ONTD?

— Emilia  is the latest celebrity to join the "Save With Stories" movement.

— Emilia recorded a video of herself and her puppy Ted reading a children's book called "Bear's Loose Tooth."

— The 4 minutes video was made to help entertain kids stuck at home  after school closures and raise money for #SAVEWITHSTORIES.

@RitaOra girl I love you and "How to be lonely" speak to me on so many levels, thank you.
But did you really waste all those eggs ? Please tell me it's some kind of trick because... I can't 😭😭

Some fans are criticizing Academy Award© Attendee Rita Ora for being wasteful in the name of ~art. After the music video for “How To Be Lonely” premiered on Friday, a few people questioned the food waste featured in a scene where Ora walks on, rolls around and does a “snow egg angel” with several eggs. It should at least be noted that a good portion of those eggs were replicated during post-production. But still.

Animal Crossing: New Horizons could not have come at a better time. Users from all around the world are embracing the outfit creation option to remake some of their favorite celeb looks, from Korean pop band BTS to Ariana grande.

Also for those of you that don’t know, you can use this site https://acpatterns.com/browse to upload pictures and generate that specific pattern, so you can upload them to the game via QR code.

-In an eerie clip posted above, the show talks about a foreign virus contaminating people.It mentions that the incubation period is 14 days which is also the same as Covid-19.

-As a result, the show started trending at number 5 on Netflix UK. Stay safe everyone!

-P.S Did anyone finish this show? I watched half of it and didn't care to finish the rest lol.

In the drama My Secret Terrius that was released in 2018 (UNIQ's sungjoo was among the cast) they talked in details about the corona virus.... I had goosebumps... pic.twitter.com/nuQ3UYZlMR

Demi Lovato's rumored new boyfriend has been posting romantic videos for her amid the coronavirus quarantine: https://t.co/d8nR4YNYod

It's being reported that Demi Lovato is currently dating former Young and the Restless actor Max Ehrich. Their relationship is only a few weeks old but apparently, they are quarantining at Demi's place. Max has shared a few Insta stories of himself cuddled up to Demi's dogs, and they have been spotted in each other's Live videos. It was last speculated that Demi was seeing Machine Gun Kelly but this relationship seems legit!

He's much better looking than the last bf with the face tats. Hoping this is a happy and healthy relationship for Demi!

The very best Simpsons episodes are television that has been a big topic on the web for years, and every answer is different. Theres a lot more than just Simpsons predictions to look at. Episodes like Homer the Great and The Last Exit to Springfield stick out but one episode I think best combines everything great about the show. It may not be the best of them all, but it’s up there. This is a look at what a perfect Simpsons episode looks like.

What have our favorite celebrity pets been up to while their owners are busy being literally and figuratively tone deaf?

Concerned about your pets? Veterinarian (and all around goodest boy) Dr. Uri Burstyn answers commonly asked questions about COVID-19. We stan.

UPDATE: Since this video was posted, a cat has tested positive in Belgium. Testing is ongoing and authorities believe the owner infected the cat. Two dogs in Hong Kong also tested positive but are asymptomatic. Jane Sykes, chief veterinary medical officer at UC Davis, says pets may be “dead-end” hosts for the virus, meaning they could become infected but cannot transmit the virus to other creatures. 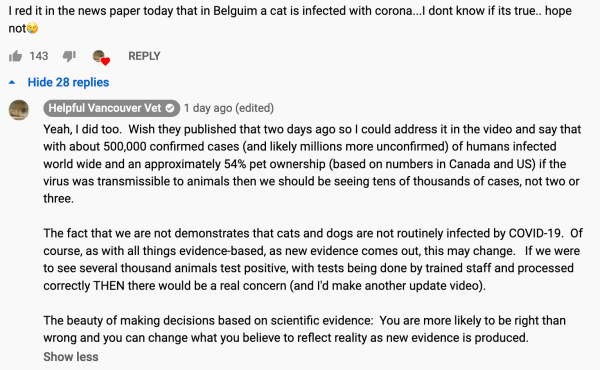 Stay safe and SQUISH THAT CAT!

- Fort Salem excitedly greets male visitors on the eve of Beltane, but Raelle and Scylla’s budding romance is interrupted by the arrival of a mysterious man from Scylla’s past. One of the male witches catches Tally’s eye, but she is unsure of how to proceed. Meanwhile, Alder attempts to convince the Hague, an international military council of witches, to follow her strategy against the Spree and is startled by the news of an escalating humanitarian crisis in the Tarim Basin.

Lady Gaga's Trump supporter father Joe Germanotta made a GoFundMe campaign to pay the salaries of his employees at his restaurant "Joanne Trattoria" (named after the same sister Gaga named her previous album after) which is being shut down for a month because of COVID-19.
The goal was set for $50k. The campaign was closed after $541 was collected, after Daddy Gaga was dragged on Twitter.
Lady Gaga is worth $300M+.

Oops!... I Did It Again turned 20 on Friday. Britney made a post in Instagram marking the occasion.

Nicole Scherzinger and beau Thom Evans fly out of London as they cuddle up in face masks despite FCO advising no 'non-essential' travel amid and the recent UK lockdown.

Nicole, 41, and former rugby player Thom, 34, were seen outside Gatwick Airport. It's unclear where they were heading and whether the reason of travel was essential or not.
The couple, who confirmed their relationship last year, divide their time between Nicole’s Los Angeles home and London.

Ellen Pompeo shared some bright sides to the news that #GreysAnatomy season 16 is ending early: https://t.co/Mh13RvKXwC

- The final four episodes of the season could not be filmed

ONTD, what are your thoughts on this mess of a season?

Apparently Sutton's horrible dress had a backstory?? Why they saddled her with a mullet dress, we'll never know.

Katie Stevens explains [spoiler]Jane's decision to break up with Pinstripe.