I’ve been really sick and I am now on the mend.

It is very possible I contracted coronavirus and I have access to get tested but I do not want to. The reason is because there is a shortage of covid-19 test kits in the U.S. and the sick patients need it more than I do

- Model and Deaf activist Nyle DiMarco has taken twitter to announce he could be sick with Coronavirus.
- He has chosen not to get tested since he's felling better and his symptoms are not as severe, but mainly due to the testing shortage in the US, which some people have celebrated.
- Also, many people are telling him that even thought he's feeling better, there are many cases of people that without proper care, have relapsed. And people he had contact with deserve to know and get tested too.

ONTD, how do you feel about his choice not to get tested?

Howdy, folks! Wether you've been knocking boots or licking them,  hope your week is off to a slightly better start than last week.

We're almost done! I had to wait until the VERY last minute to put this up, simply because one vote was too close to call until the very end.

If it makes you feel better, that's all 4 of my top British faves knocked out. To be honest, one didn't even make the top 32. Ah well. Out of this remaining lot, how many do you think had ancestors who were lords or ladies?

With so few people, you don't need that much time to vote. You have until 2 PM, March 23rd, CST!. I got to add some more to these later posts.

Any suggestions? I'll probably implement them in the Final 2.

For yesterday, March whatever.

☁️💗 April Issue @vogueaustralia 💗☁️ we did this while I was in Sydney for Mardi Gras and it truly started off my week in colour! One of my favorite shoots 🌈 on stands March 30th 🇦🇺 pic.twitter.com/05i2F0Rmgf

ONTD, are you bopping in your livingroom? 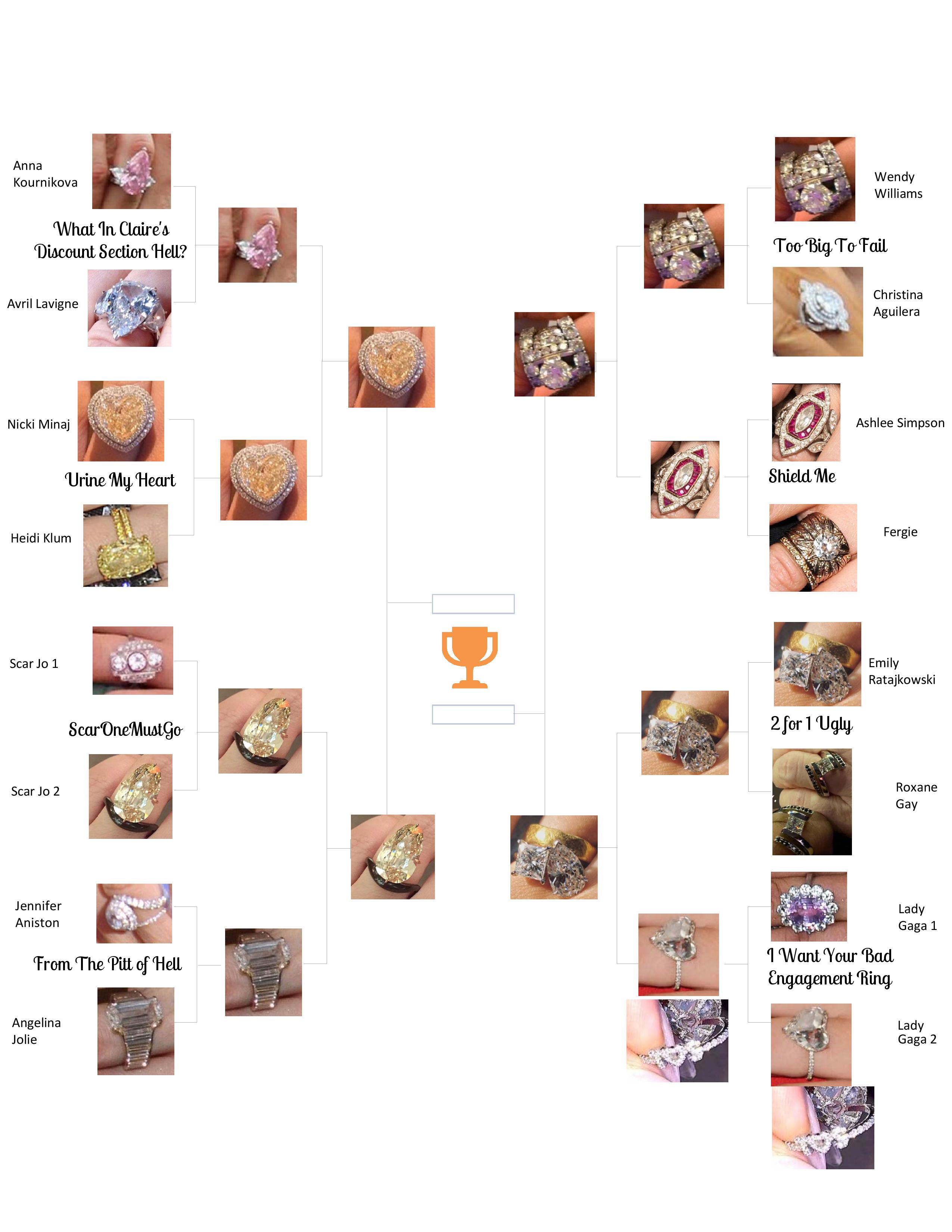 Open to: All, detailed results viewable to: All. Participants: 992

Open to: All, detailed results viewable to: All. Participants: 990

curlycutie016 for help with the bracket. ONTD, my best friend's wedding has been postponed due to COVID-19 and ngl, feeling really sad about it. If anyone has any fun wedding stories or anything super ~scandelous that happened at a wedding you attended and want to share in the comments, I think we could all use a laugh rn.

Harvey Weinstein, now one of New York's most notorious prison inmates after being sentenced for sexual assault, has tested positive for the COVID-19 virus, according to officials connected to the state prison system.https://t.co/jV2R1febG6 pic.twitter.com/4IpASvP1a6

Oscar-winning movie producer Harvey Weinstein, now one of New York's most notorious prison inmates after being sentenced for sexual assault, has tested positive for the COVID-19 virus, according to officials connected to the state prison system.

He is one of two Wende inmates who have tested positive, the officials said. Officials familiar with his situation said it is believed Weinstein was positive for the virus when he entered the state prison system last Wednesday from Rikers Island, a New York City jail.

Marble racing, a competition that requires no human interaction, has emerged as a perfect sport for the coronavirus era https://t.co/gtGIFpsEZl

"Emerged" Marble racing has been around for years. Get with the winning team!

Professional sports leagues may be cancelled bc of Corona-v, and a new-old competitor now has its time in the spotlight - Marble Racing.

The Marble League was founded in 2016 by Jelle and Dion Bakker, who run the wildly successful Jelle's Marble Runs Youtube Channel, where Elijah Daniel does the english commentating;


The Marble League 2020 starts in June, but there are short races (above) that are uploaded about once a week, and a sizable backlog. Check out the Marblelympics!

( Collapse )
There's no need to pick a team based upon where you live, but simply on what you like. Pick a group and support them, or just watch the marbles roll!

in this house, we stan the Oceanics.

ONTD what in-door activities are you doing to keep yourself entertained?

#AnimalCrossing does the public service of cleansing our Twitter feeds https://t.co/vvgxv8JNuT

Animal Crossing launched this friday, and expectedly it's taken up the community by a storm. Here's some cute tweets:

This is just an excuse to talk about the game, ONTD are you playing ACNH ?

Greg Grunberg who was in the new trilogy talked about the first time he met Carrie Fisher.

"We hit it off very quickly. We’re both filthy, fun, prepared actors, and we have the same sense of humor. I gave her sh*t the first minute I saw her. On The Force Awakens, my first scene was actually a scene where she’s cutting my character down, and then she walked towards me… She walked right towards me, wrapped her arms around me and grabbed my ass. And I didn’t even know her! I was thinking, ‘This is Carrie Fisher! I’m such a fan’. So, she did that, and J.J. walked up to me and goes, ‘Welcome to Star Wars‘.”

I present to you 20 sexy and ~muy caliente current (for the most part) telenovela actors and actresses.

ohmylol y @trendsnational (I can’t tag you, King!) por la ayuda! Share your favorite hotties in the comments and I just might create a follow up including your faves in a Part Dos!

Thank you for your concern Pooks. Yes people ARE dying. It’s terrifying. For your information, I booked once I knew Paley was cancelled. Is that okay with you?

The Outlander actor is currently in hot water on social media for vacationing in Hawaii with an alleged escort and adult film star amid a global pandemic. He admitted that he had booked his holiday when PaleyFest was cancelled. When further pressed, he responded with: “Excuse me? Not that I have to explain but let me. I was brought to America for MANY work commitments. I had booked a holiday this week, after over a year of commitments.”

“I’m self isolating / taking care whilst looking to return home, if safe,” he continues. “I hope you’re safe but please unfollow.”

The very best Spongebob episodes are all pretty unique of one another, there’s no formula or exact science. Yet episodes like Squid’s day off and Pizza Delivery have a few things in common. Spongebob and Squidward have combined for some great moments, but there’s a few moments that I think mark the best of the show. This is a look at what a perfect Spongebob Squarepants episode looks like.

#NewMutants Director Says You Can Only Go Up After ‘Dark Phoenix’ Bomb https://t.co/bQoWuMjE5z pic.twitter.com/A4TceYcknw

‘New Mutants’ might never come out at this point, but director Josh Boone is optimistic:

“Look, you can only go up after ‘Dark Phoenix. That’s not to say anything bad about the people involved, but it was what it was. Honestly, I feel less pressure now than I did ahead of [the first slated release date]. Because we’ve tested our movie so many times, and audiences have loved it.”

what have you watched in isolation so far ontd?

Voice actor Sarah Natochenny takes us through her full process of dubbing 'Pokémon.' Cartoons like 'Pokémon' are often reinterpreted from one language to another and require fine-tuning, digital lengthening, and script alteration. From scene setting to the first run through, watch Sarah’s cartoon dubbing session with a voice director and engineer down to the completed scene.

On March 19, 2020, The International Federation of the Phonographic Industry (IFPI) which represents the worldwide recorded music industry has released the top 10 best selling albums worldwide. According to their site, the IFPI Global Top Ten Album Chart combines global sales of physical and digital album downloads to rank the top albums of the year. The chart includes physical and digital album unit sales only.
IFPI's official twitter account did a count down of the top 10.
There were a good deal of anticipation from fans of certain artists. Each predicting their own number 1's. However, very few actually predicted the top 1 in the list.
( Collapse )

.@chrishemsworth announces his health and fitness app @CentrFit will be free for 6 weeks to help "find a sense of calm at a time when we all need that the most"https://t.co/mJ6koeA1jp pic.twitter.com/gxbjyZgePf

Chris Hemsworth has announced his fitness and health app Centr will be free for the next six weeks.

Part of his statement: “We have been incredibly inspired by the outpouring of support and positivity from the Centr community during this challenging time. We hope that by making Centr available to everyone for this extended period, we can help even more people stay strong, healthy and find a sense of calm at a time when we all need that the most."

- The Canadian Olympic Committee and Canadian Paralympic Committee announced today that they won't be sending any athletes to the summer games over COVID-19 risk. They call on the IOC to postpone the games by one year.
- In a press release they said: "This is not solely about athlete health – it is about public health. With COVID-19 and the associated risks, it is not safe for our athletes, and the health and safety of their families and the broader Canadian community for athletes to continue training towards these Games. In fact, it runs counter to the public health advice which we urge all Canadians to follow."
- Meanwhile, the IOC announced they will decide in 4 weeks what they're doing with the games. Previously they said the games would happen as planned with tighter restrictions on athletes regarding COVID-19. But public pressure has caused them to rethink this or claim too.
- Australia has told its athletes to prepare for the games being postponed and Japanese Prime Minister Shinzo Abe acknowledged the Olympics might not go on as planned.

UPDATE: Australia has now also said they will be not be sending athletes to the summer games.