- Titled Donald Glover Presents and streaming on loop at donaldgloverpresents.com.
- Consists of 12 tracks.

The good news about the awful box office numbers this weekend is that people and theaters seem to be taking social distancing measures seriously. Onward made just $10.53 million in its second week, an enormous drop, while I Still Believe and Bloodshot were just behind with $9.5 millon and $9.3 million, respectively. The Invisible Man came in fourth with $6 million, while The Hunt made its belated debut with $5.32 million. But I'd be willing to bet the numbers are way up on all streaming platforms.

I picked the title bc yay alliteration! If it references some kind of difficult war my American ass doesn't know about, tell me and I'll find something else.


⏰REMEMBER TO CHECK THE LATER PAGES!⏰
I'm surprised it took so long to nominate some of these people!
I have wanted to do this for a long time, and what better time than when we're all stuck inside and March Madness is cancelled 🎉

End Goal:
Finally decide who ONTD's favorite Brit is once and for all.

1.Nominate women/men here. Make a comment, preferably with a picture. People +1 or 'yasss queen' their support. I am on the fence as to include pets, but I think for now, we'll wait on that.

2. Must be British by birth or nationality*
*You were born and raised there, or moved there as a child. If you moved to Britain (The UK, Wales, or Scotland) as an adult, eh...It's like, I won't call Bieber an American bc he moved here and lived here as a teen and now adult, right? I know Northern Ireland is also a bit up in the air regarding its inclusion. I welcome any insight on if you want to include Irish celebrities as well.

3. Don't include Harry Styles I'm kidding I don't even know this man. Include him if you want.

Timeline:
Today: This post!
Wednesday the 18th: This post is locked at 2 PM Central Time, give or take.
Friday the 20th OR Saturday the 21st - The first Poll goes up, and we work from there. I hope to have a poll ready every 3 days or so.

ask your questions, especially if i've made something unclear. I've never done this before!

ONTD, whatever happened to Andrae?

#NancyDrew EPs Break Down That Pair of Insane, Life-Changing Reveals: 'You Never Know When the Case Will Be Solved' https://t.co/Gm6ZsIf3mZ

-While Elite has been renewed for its 4th and 5th seasons, major changes have occurred to the main characters by this 3rd season’s end.
-[Spoiler (click to open)]As most of the main characters have either died or graduated and moved away from Madrid, with the exception of Samu, Guzman, Rebecca, Ander, and Omar who have to repeat a year at Las Encinas and Cayetana who works there as a janitor (lol), season 4 of the hit Spanish teen murder drama will feature an entirely new cast of teens, taking notes from teen shows before it like Skins and Degrassi. No word yet on if [Spoiler (click to open)]the characters who are stuck at Las Encinas will feature.
-Cayetana actress Georgina Amorós teases: "It's a season where the cycle is completed. Another one starts. Get your tissues ready because you will need them. It's a very complete season". Alvaró Rico (Polo) adds: "It's the definitive ending to the evolution of the characters."

SOURCE
This is just an excuse to discuss Season 3 which was so good imo but also such a mess! A lot tamer and more grounded than previous seasons. I loved all the new friendships that developed, and how much everyone grew up and matured. Also [Spoiler (click to open)]good riddance, Polito.

The Psychedelic Furs first record in 29 years Made of Rain arrives in May. https://t.co/86QAk3cIFT

-They've already released a song called "Don't Believe"
-Another single called "You'll Be Mine" just released a lyric video
-The band says they are keeping their new wave production style but will have a "more anthemic, vocal-forward approach"

Singer Gloria Gaynor has used her hit song "I Will Survive"  to inspire people to wash their hands to combat the coronavirus. The video has since gone viral.


Willow and (rumored bf) musician Tyler Cole, were locked in a glass box from last Wednesday to Friday as a part of a performance art piece entitled "The Anxiety". According to the LA Times the two would be "cycling through emotions such as paranoia, rage, sadness, numbness, euphoria, strong interest, compassion and acceptance."

This performance art is one of the events in the lead up to the joint-album between Willow and Cole, also called "The Anxiety".

Hair and Beauty post? What are y'all buying now that most of us are in the house 24/7?

The coronavirus outbreak has begun to affect big retail stores in the country, as two major companies announced this weekend they will close all of their U.S. storefronts for the rest of the month. https://t.co/c61SWFbDhH

As the COVID-19 pandemic gets worse, major retail chains are closing their doors to stop the spread and protect their workers.

Here is a list of the stores that have announced closing and/or limited opening times:

APPLE -- All stores outside of Greater China will be closed until March 27.

PATAGONIA -- All stores and website closed. Company will announce next steps March 27.

LULULEMON -- Starting tomorrow, all stores will operate from 12pm-6pm.

NORDSTROMS -- Stores will remain open but hours will vary by location.

KING OF PRUSSIA MALL -- One of the largest malls in America is also now closed, after initially defying the PA govenor's recommendation of closing all non-essential business in Montgomery County (where the mall is located) due to the county having the highest number of cases in the state. Other nearby malls in the county have also closed.

it’s incredibly difficult to make smart decisions while panicking , but think twice before following the fear and being inconsiderate. There is enough to go around if we take care of one another. This is a beautiful time to LEAD!

Miley Cyrus is encouraging people to be “compassionate” amid the coronavirus pandemic. The “Wrecking Ball” singer urged whoever is preparing for social distancing to “Be thoughtful. Respectful. Compassionate. HUMAN.”

“NO ONE needs every soup in the store, the more we hoard the more expensive and sparse necessities will become, leaving many without essentials,” Cyrus wrote on social media, alongside a clip from her former Disney Channel series Hannah Montana, referencing the many photos and videos that have made rounds on social media showing empty store shelves worldwide.

“This is a great time to practice restraint... it's incredibly difficult to make smart decisions while panicking, but think twice before following the fear and being inconsiderate. There is enough to go around if we take care of one another. This is a beautiful time to LEAD!” she added.

How are your local store shelves? Any success in finding things you’ve needed over the weekend? 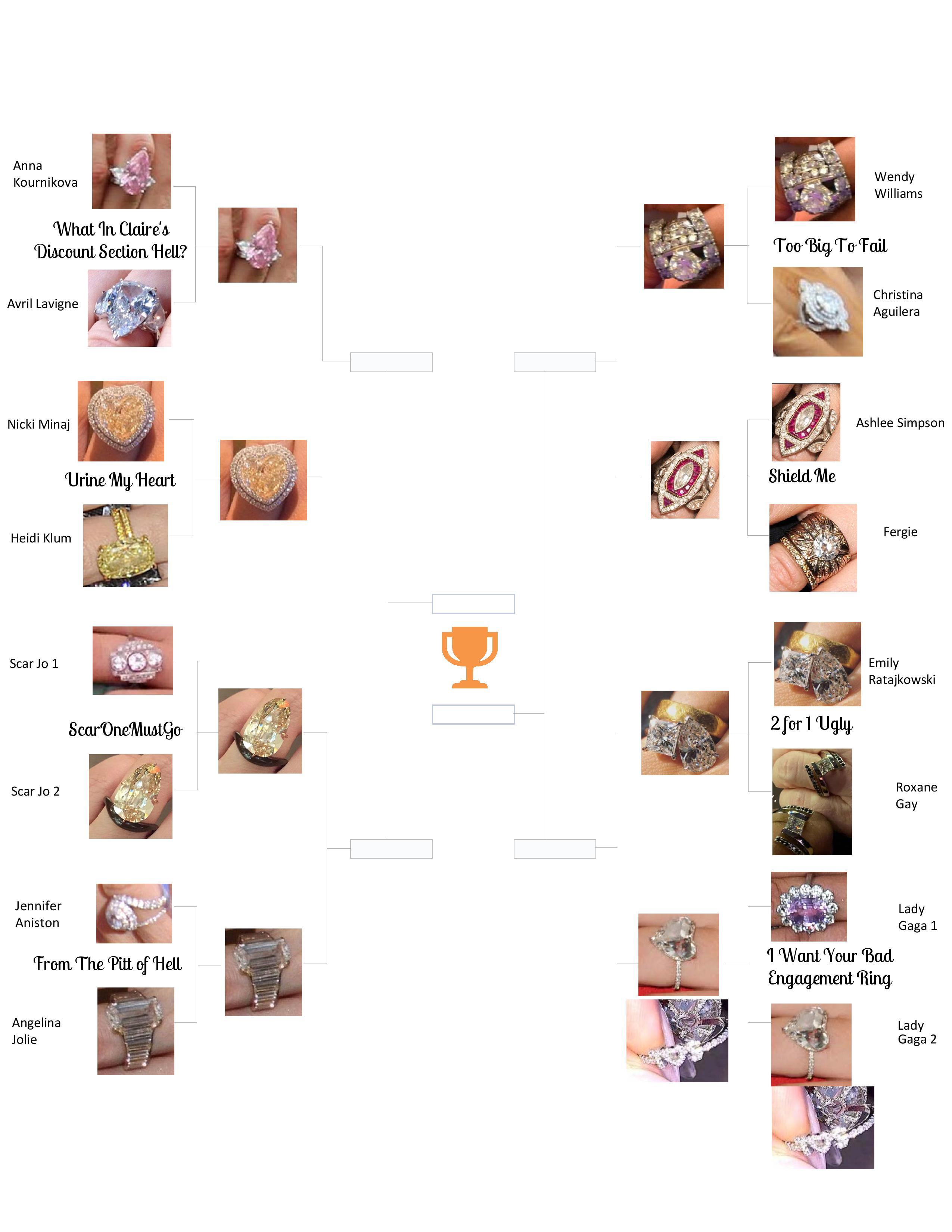 ONTD, the results from the last poll are in and it's time for the next round of voting. This week has been one for the history books and where words fail, we have gifs.

curlycutie016 for making the bracket and thank you ONTD for really embracing this weird tournament. since today is the ides of march and i love any excuse to discuss costume dramas, what's your favourite fictional engagement ring/wedding dress? which fictional wedding dress/ring makes you want to hurl? post your thoughts in the comments! 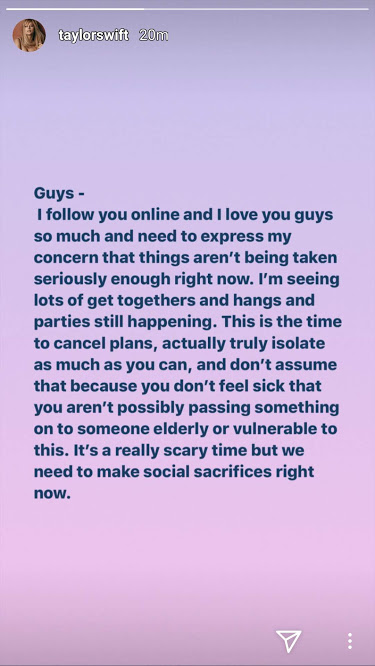 Taylor Swift posted on her IG stories that she is concerned after seeing people still gathering at parties. She says now is the time to cancel plans and stay home for the safety of the elderly and vulnerable (like her mom who has brain cancer).

This post was inspired by some of y'all in the FFA posts, talking about needing some sexual healing, via the dating apps, but my anxiety levels can't take it.
Listen, the only safe sex right now is self-love, babes!

SEX POST!! ONTD, what are your favorite sexy songs?

Ana de Armas covers the April digital issues for Vogue Spain and gives an interview. In the interview, she talks about working with new boyfriend, Ben Affleck, in Deep Water.

Two sides of the Democratic party battle it out for the nomination. @JoeBiden and @BernieSanders go head to head in the CNN and Univision Democratic Presidential Debate. Tonight at 8 p.m. ET pic.twitter.com/881vCvnQxa


. Debate was moved from Arizona to Washington, D.C., due to concerns about the coronavirus

. No studio audience will be present

. Jorge Ramos with Univision pulled out as a moderator because he was exposed to someone diagnosed with coronavirus

. Available to watch on all CNN and Univision platforms

Something we can all do together (but separately) is watch live events like the debate tonight on @CNN 5pm P/8pm E
See you there! ❤️❤️

During Justin Bieber’s deposition in 2014, the Biebs said, “I was found on YouTube. I think that I was detrimental to my own career.“

What he meant to say? Instrumental, not detrimental. But the Biebs didn’t exactly lie.

Have you used a word incorrectly before?

After Tyler Cameron's mother passed away suddenly from a brain aneurysm earlier this month, former Bachelorette Hannah Brown went down to Florida to support Tyler and his family after his mother's death. On Saturday Hannah was seen returning to Florida for the second time in a week with Tyler there to greet her at the Palm Beach airport.

They've since been spotted around Jupiter, Florida, and Hannah even got the stamp of instagram approval from Tyler's best friend Matt (future Bachelorette contestant).

Should also be pointed out Tyler just landed a Calvin Klein job.

Hey it’s me in my undies! pic.twitter.com/3NkqchYiQm

If everything wasn't bad enough already, Riverdale is destroying another musical!

for those stuck at home, this fever dream of a show is on Netflix (first three seasons in the US and all episodes in the rest of the world). it's very bingable.

-Zoey confides to Max about her special gift.