The Good Place aired it's second to last episode this week.
In the episode:

[Spoiler (click to open)]
Team Cockroach finally reached The Good Place as a reward for fixing the broken afterlife system in the previous episode.
Once here, Chidi meets one of his idols Hypatia of Alexandria (played by Lisa Kudrow) who tells them that The Good Place is broken. It's never ending and has lost all meaning and people have grown tired of it.
Eleanor then comes up with the idea to give people the option to "end" their time in the universe after they re satisfied with The Good Place and cease to exist by passing through a door.

Read Variety's interview with Mike Schur at the source.

Pet Shop Boys just released their new album ‘Hotspot' on 24th January 2020 and this is the official video for the song 'Monkey Business'. The music video features gay sailors, drag queens and PSB themselves getting down at a night club.

*Note: This list only includes wins,not nominations. Also not all wins are listed,just the most notable for some.

Kate Winslet: 2000. Best Spoken word for a children's album "Listen to the storyteller"

- Michael J. Fox- 2010," Always lookiñg up: The adventures of an incurable optimist".

Yesterday, the Annie Awards were happening, and for the first time, the winners made the OP go "That's what we're doing, huh? Ok."

The Big 3 Studios were left with nearly nothing, as the unexpected winner in all of it's 7 nominated categories was Netflix's "Klaus", including Best Animated Feature. Netflix also walked away with a TON of wins for various productions.


Here are 5 other winners.

Who would have expected that the Animated Race is leaving Disney in the dust this year. You love to see it.

This weekend's only new wide releases were The Gentlemen, which came in at #4 with $11.03 million, and The Turning, which came in at #6 with $7.3 million. Bad Boys For Life, which dominated the box office last weekend, did so again this weekend, bringing in another $34 million. 1917 took the #2 spot with $15.8 million, and crossed the $100 million threshold in its 5th week of release. December wide releases Jumanji, Star Wars and Little Women are still placing in the top ten, with November release Knives Out hanging in at #10, after making $151.8 million in nine weeks.

It's no secret that the Prime Minister of Pop® Carly Rae Jepsen is guilty of overwriting. She revealed in past interviews that she'd written over 200 songs for her album E•MO•TION. For her latest album, Dedicated, the total number of songs that she wrote before she was tasked with narrowing them down to the final 15 were just as over the top.

So what happens when you churn out 200 songs for each album cycle and only the top two dozen or so songs can be released? Some of them are released on a follow up album just like her much beloved E•MO•TION Side B. Others are given new life by being released on a completely different project. One example is her song Cut To The Feeling, which was featured in the 3D animated film, Leap! Unfortunately, most are locked up in a vault, never to see the light of day, or worse, buried in her back yard. Occasionally, some songs get slipped through the cracks and make their way online, much to the delight of her fans!

Without further adieu, here are two songs that "slipped through the cracks":

I Believe You (play)

Look Me In The Eyes (play)

Are we feeling these rejects?

BREAKING: Kobe Bryant Has Died In A Helicopter Crash https://t.co/42oINV9ZUU

Four other people on the helicopter with him were also killed.


* After debuting with 'War + Raindrops' ep last year, Iyla returnes with a darker tone for new ep.
* Describes this as a deeper, more ethereal part of artistry
* Will kick off 15 city tour on February 16th

"1917" continues to rack up the important precursor awards. On Saturday it was the Directors Guild prize for Sam Mendes. https://t.co/LWKiQDsUIg

Sam Mendes (1917) claimed the Directors Guild of America award for feature directing on Saturday night, which makes him a mortal lock for the equivalent Academy Award for Best Director, since those prizes have almost perfect synchronicity over the decades. What you think that says about the film's Best Picture prospects, more open to question, as there's been a pronounced decoupling of the Picture and Director prizes in recent years. This is Mendes' second win, the first being for American Beauty twenty years prior.

The prize for debut feature directing went to Alma Har'el for Honey Boy, while TV prizes went to Watchmen's Nicole Kassel (for the pilot), Bill Hader (Barry's "ronny/lily"), and Chernobyl's Johan Renck (because everyone wins awards for this except Jared Harris).

Undercover Boss checks in with one of its more notorious bosses, Kylo Ren (Adam Driver), to see if he kept his promise to change his company.

Selena Gomez says she believes she was a victim to a certain emotional abuse by ex Justin Bieber: https://t.co/20LXRaYS8c

In an interview with NPR's Lulu Garcia-Navarro, Selena talks about the difficulties that she has experienced over the past couple of years.

She discusses how she learned to take care of her mental and physical health and her public persona. Selena opened up about how she used her music to help her find closure.

Garcia-Narvarro asked Selena if "Lose You To Love Me" was a goodbye to Bieber and if that time in her life was painful.

NPR stated that they reached out to Justin‘s team for comment and has yet to receive a response.

Link to the full interview.

It’s music’s biggest night. The 62nd Annual Grammy Awards will once again be hosted by 15x Grammy Award Winner Alicia Keys. The ceremony begins at 8 p.m. ET / 5 p.m. on CBS and will take place at the Staples Center in Downtown Los Angeles. Feel free to share alternative streaming links with others in the comments.

I will try my best to update this post with the winners shortly after they’re announced.

Ewan McGregor and Chris Messina were asked whether or not their characters Black Mask and Mr. Zsasz are gay in 'Birds of Prey', which would make them the first real LGBT representation in the DC movies.

“It’s very complicated,” McGregor said. “Their relationship is very much based…there’s a want and a need in there for sure.”

Messina added, “There’s like a real love of anarchy.”

McGregor then interjected and said, “More than likely, yes.” Both actors laughed.

RIGHT NOW! Watch GRAMMYs Live From The Red Carpet. The official livestream of the 62nd #GRAMMYs, with exclusive interviews and camera angles for complete coverage of Music’s Biggest Night. https://t.co/VjBqDov7yv 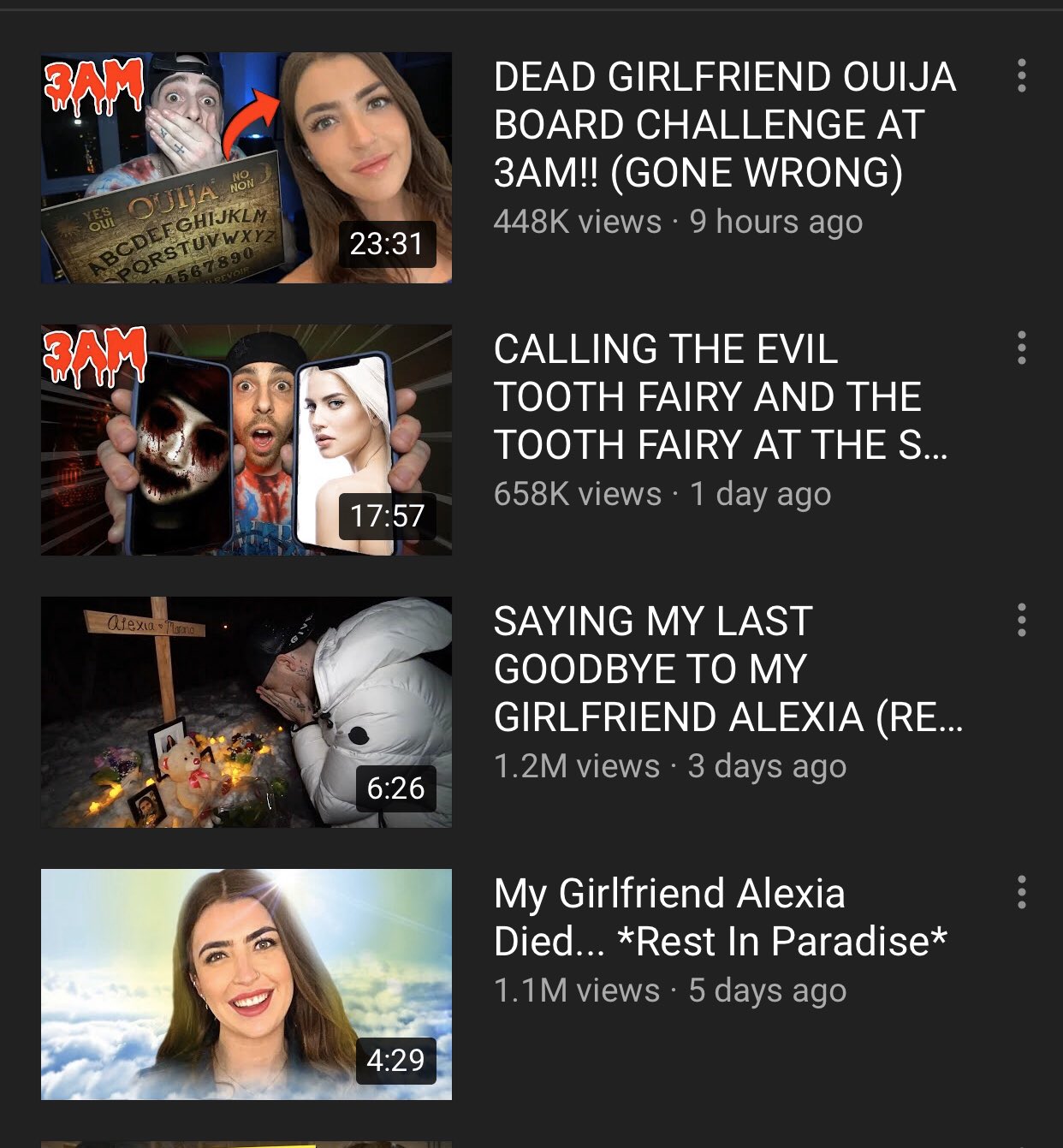 - ImJayStation is a YouTuber with more than 5.4 million subscribers (op: why?!). He is known for his 3AM "challenge," "buying things from the dark web," and trying to communicate with recently dead celebrities (most notably Mac Miller and Etika, causing many people to call him out for profiting off their deaths). He is also known for his videos having homophobic (his gay potion videos), racist and sexist undertones as well as talk yelling way too much and the overuse of the word GUYS.
- On January 21, 2020 ImJayStation posted a video titled "My Girlfriend Alexia Died... *Rest In Paradise*". In the video, he claimed his girlfriend Alexia was struck and killed by a drunk driver the day before. Skeptics were quick to point out how he never sheds real tears in the video and how quick he was to start talking about their shared channel and how it was her dream to hit a million subs.
- He posted another video where he went to a roadside memorial that had supposedly been set up by her parents. The snow looked old and had no indication there had been an accident there (tire marks, etc;). There is also a wood signpost that ImJayStation says she must have hit, however, if that was the case wouldn't a wood sign have been broken? There is nothing at all indicating that there was an accident there.
- YouTuber SomeOrdinaryGamers even shared a phone conversation he had with the Toronto Police in a video where the officer said he didn't have anyone of that name having passed away.
- There is no mention of a fatal car accident on January 20 on the Toronto Police or Ottawa Police press release page. There is mention of an accident on January 21 that resulted in a young woman being killed but it doesn't match any of what ImJayStation claimed. OP also put the location of the accident into GoogleMaps and it doesn't look anything like the roadside location in his second video.
- Earlier today ImJayStation posed a new video "DEAD GIRLFRIEND OUIJA BOARD CHALLENGE AT 3AM!! (GONE WRONG)." OP hasn't bothered to watch the video because he doesn't deserve the views.
- In 2017 ImJayStation flew from Toronto to Texas to meet up with an underage fan and spend the night in a hotel room with her. You can still see all these videos on his old channel. The fan was later interviewed by another YouTuber where she said that even though nothing happened she was too paranoid to sleep that night because she didn't know what he would do.
- As of the time, this post was submitted there have been no police reports, news articles or obituaries confirming Alexia's passing.

**UPDATE: ImJayStation posted a video called "ALEXIA MARANO *THE TRUTH ABOUT HER*" where he admitted that Alexia is indeed still alive and had never been involved in an accident. He also said Alexia had left him and is on a ~mission to ruin his career and had reported him to police for assault with a weapon. The video shows some footage of the police coming to his door and informing him of these allegations.

**UPDATE 2: ImJayStation claimed that there was a warrant out for this arrest. The Toronto Police told NewsWeek "at this time, there is no Toronto Police warrant on file for a Jason Ethier."

OBVIOUSLY if Alexia has passed away I will delete this post and apologize to her family. But as someone who has lost three people to a drunk driver, this is absolutely despicable.

-Ian & Mickey are married (yay!) we'll see them being newlyweds and how they'll compromise to have a successful marriage
-Kev & V got engaged (totally forgot they weren't married) but first the show will have some fun finding Kev's
ex-wife to get a divorce
-would love to have Emmy back before the end but she has a busy schedule so we'll see

are you ready for one more season?

ONTD, are you so freaking excited as well?

Demi Lovato made a triumphant return to the GRAMMYs stage on Sunday night with a show-stopping performance of her new single "Anyone". After getting off to an emotional start, Lovato expertly took it from the top and reminded all in attendance and watching from home why they fell in love with her in the first place.

The studio version of "Anyone," recorded just days before Lovato's much-publicized, near-fatal overdose in July 2018, is available now on all platforms.