Even though they still follow one another, Kacey Musgraves and husband Ruston Kelly have deleted all photos of each other from Instagram and Twitter. The two musicians married each other in 2017 and shared photos of their wedding that took place in a forest in Tennessee. Earlier this year, Kacey won album of the year for Golden Hour and thanked her husband as she accepted the award, saying, "I really believe I wouldn’t have this album if I hadn’t met you, and you didn’t open my heart like you did. So, thank you so much."

However, Kacey attended the CMAs alone in November and did not mention her husband in her acceptance speeches for music video of the year and female vocalist of the year. Ruston didn't acknowledge her win on IG for several days and then finally shared an IG story about it. 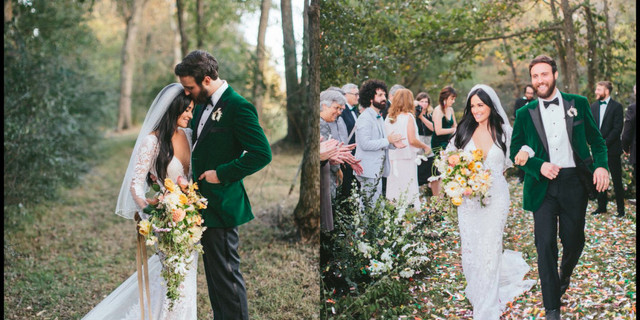 The last photo of them together was posted in November by Ruston's tour mate when Kacey showed up to surprise Ruston.

ONTD, does deleting a significant other's photos mean it's over, or could it mean they just want privacy?

The only wide release debuting this weekend was a remake of The Grudge, and it couldn't budge Star Wars: The Rise of Skywalker from the top spot, landing at #4 with $11.3 million. Star Wars brought in $33.7 million, bringing its domestic box office to $450.8 million, while Jumanji: The Next Level came in at #2 with $26.5 million. Little Women is showing strong legs, bringing in $13.6 million this weekend for a domestic total of $60 million, while Frozen 2 rounds out the top 5 with $11.29 million.

Issa a spinoff! Why can't these people just call it season 2 of Life After Lockup?! Couples we with whom we have elegantly journeyed are returning to show us the updates in their life.

- Return of the Jedi Rogue Veneer Angela is burning Tony's shit because well he cheated. Y'all know that chipper soprano voice in that Motel 6 wasn't Angela. Tony is exchanging motel rooms for handies on the Petri dishes they call mattresses. (If sis don't dump this damn ashtray.) He comes back from "work" and Angela confronts him about cheating.
- Reality TV Villain Michael returns already talking to other "females" on the way to see his girlfriend and then return to see his wife after. He's been liberated from his ankle monitor and tells Moronic Megan that he allegedly has divorce papers. Those children are just such cutie patooties and why is not surprising he's a deadbeat dad.
- That scene where Sarah and her escaping blaccent imitates Michael for her daughter is just heartbreaking. Megan's friend hates Michael and rightfully so and subtly trying to tell Megan that he ain't shit.
- Supportive Uber Driver Misogylino takes Brittany to the doctor and we confirm she's pregnant! This will be the couple's second bebeh.
- Black Mormon Weave Lady is back with her fake Birkin! Compton Mormom Captive Lamar has left Utah and is back in Cali while she's living in Utah. Dis was kidnap! Gooooooooooooooooooooooorl, apparently the little kid is Lamar's which is why Andrea hasn't filed for divorce. She fucked Lamar in a prison closet - what a fabulous Mormon!
- Domestic Abuser Lacey and Malicious Wounder with a Heart of Gold go to a fertility clinic because he wants a kid. They are moving into a house (OP is jealous) and she paid for everything and MWwaHOG is drinking during the moving process. She gets a text from her other inmate boyfriend afraid that he might relapse and upset that Shane doesn't bring in the money that John does.

This episode is brought to by Motel 6: We'll leave the light on for you, but like... try to have some tact.

The official trailer is finally here! Get ready for the Season 5 premiere on February 16 with the @STARZ App, the only place to catch up on all seasons of #Outlander. https://t.co/izxi7qygCZ pic.twitter.com/TjCvvOSNb5

The new trailer for Season 5 of Outlander premiered this week on Good Morning America. It premieres February 16 on Starz. There is some spoiler stuff in the trailer, one thing in particular, that caused a stir in the fandom that Sam commented on below the cut!

Our Graphic Content columnists pick the best comics of the year. From '50s Canadiana to modern-day feminism to coming of age in Albuquerque, there's something here for everyone. https://t.co/x1yVG6jlfS

- For ONTD that doesn't read, but does enjoy to read and look;

- at least half of them are by female authors;

- a few titles are: DRAWING POWER: WOMEN’S STORIES OF SEXUAL VIOLENCE, HARASSMENT, AND SURVIVAL, Good Talk, Guts
(in order about #MeToo/Trump, what to tell your brown son when his white grandparents support Trump, and anxiety/emetophobia);

How readers did on Upshot's facial recognition quiz, and what we can learn from their mistakes. https://t.co/MdyCjT1keR

- Are you good at putting a name to a face? Depending on your age and media-intake, you might not be;

- NYT offered a quiz in which you had to put a name to 52 faces;

- "Even though most readers were able to correctly identify Beyoncé, for example, thousands thought she was Jennifer Lopez, Cardi B, Rihanna, Laverne Cox, Kim Kardashian or Ariana Grande."

- Jeffree Star was only guessed correctly for 10% of the replies, mostly confused with Marilyn Manson.

It’s #GoldenGlobes time! Here’s a look at the bustling red carpet. Which stars are you most excited to see? ✨ pic.twitter.com/MHF5d1LnEV

The Golden Globes are tonight at 8pm EST/5pm PST, but first... the red carpet! Will update as we go.

Tonight the 77th Annual Golden Globe Awards will be honoring the best in film and American television of 2019. It will broadcast on NBC live from The Beverly Hilton in Beverly Hills, California and will be hosted by Ricky Gervais. The ceremony begins at 8 PM ET / 5 PM PT.

Tom Hanks will be honored with the Cecil B. DeMille Award, while Ellen DeGeneres will receive the Carol Burnett Award.

I will try my best to update this post with winners as they’re announced.

Best Performance by an Actor in a Motion Picture - Musical or Comedy
Taron Egerton, Rocketman (WINNER)
Daniel Craig, Knives Out
Roman Griffin Davis, Jojo Rabbit
Leonardo DiCaprio, Once Upon a Time in Hollywood
Eddie Murphy, Dolemite Is My Name

Best Performance by an Actor in a Supporting Role in Any Motion Picture
Brad Pitt, Once Upon a Time in Hollywood (WINNER)
Tom Hanks, A Beautiful Day in the Neighborhood
Anthony Hopkins, The Two Popes
Al Pacino, The Irishman
Joe Pesci, The Irishman

#Frozen2 is now the highest-grossing animated movie ever https://t.co/RbVBacSg1V

In a "Heh, maybe 6 years later isn't too late." kind of way, FROZEN II is now the highest grossing animated film of all time.

So, time is a flat circle in the animation world. Time for them to pull a third story out of their ass and pretend that 'they wanted to make it bc it's a good story' and not money. It looked lovely though, and better music.

Golden globe nominee Ansel Elgort sang his way through presenting the Best Original Song award at the golden globes. Dakota Fanning was there.

They got married in a small (40 guests) ceremony in Homestead, Florida

her co stars Skeet Ulrich, Drew Tanner, and Madelaine Petsch were there

Safiya Nygaard of YouTube fame got secretly married to her long-term boyfriend, Tyler somethingorother. They tied the knot in November and she posted their wedding video today.

They had a unique wedding vibe inspired my medieval and Renaissance-y stuff. She had a second black wedding dress that she changed into for dancing at the reception.

Open to: All, detailed results viewable to: All. Participants: 233

do u want to get married, ONTD?