Saudi Arabia crown prince Mohammad bin Salman Abdulaziz Al Saud has been regularly texting, showering her with gifts including a credit card and flying her around in private jets, prompting reports of the pair dating. Lindsay has long been popular in the Middle East and has found a spiritual second home for herself out there.

Despite this, a representative for Lindsay clarified that the pair had only met once 'around a year ago at a Formula One Grand Prix race'.

Recently, Lindsay's father insists his daughter's relationship with the Crown Prince is 'platonic and respectful'.

The prince has been in the headlines after Jamal Khashoggi, a columnist and critic of the crown prince, was murdered on Oct 2 at its consulate in Istanbul. His dismembered body has never been found.

When quizzed about the accusations against Mohammad bin Salman, Michael Lohan insisted they weren't true and his daughter felt 'safe' in his company.

Who else is loving the #Daredevil and #Loki costume swap from #BetrayalBroadway tonight?! The helmet doesn't look too bad on Tom but don't forget that #CharlieCoxIsDaredevil 😈 @MarvelStudios @Marvel @Disney @hulu @kevfeige! #HappyHalloween #SaveDaredevil pic.twitter.com/zAKe3LFIaH

Tom Hiddleston and Charlie Cox appeared as each other's characters during a showing of Betrayal on Broadway.

What a moment 😭 (via @Cut4) pic.twitter.com/SC9XVQnADB

Once a second league team, the Washington Nationals rose from underdog status to world series champs. the team which is relatively new and founded in 2005 beat the astros.

Congratulations to the @Nationals .. so much fun to watch you play and win !!!

Taylor Swift will be honored as Artist of the Decade at this year's ceremony and will perform (probably a medley of her hits). Swift currently has the most AMA wins of any female artist ever with 23 awards. This year she is nominated for artist of the year, favorite music video, favorite female artist - pop/rock, favorite album - pop/rock and favorite artist - adult contemporary.

Promo summary
When Dex’s ex Fiona, a famous musician, comes into town for a performance, Dex must protect her from a stalker. Meanwhile, Grey continues to receive the cold shoulder from Dex, and Tookie and Lieutenant Cosgrove develop a new friendship.

. Stumptown received a full season order for the series

. If you've missed any and want to catch up or check it out, then you can watch episodes on ABC platforms or Hulu

Icymi here is the premise of the show [Spoiler (click to open)]
Dex Parios is a sharp-witted military veteran, who struggles to get by and take care of her younger brother, in Portland, Oregon. She also struggles with PTSD from her time as a Marine in Afghanistan, where she worked in military intelligence until she was injured by an explosion which killed her childhood sweetheart and former lover. Burdened by heavy gambling debts and unable to hold down a steady job, she becomes a private investigator to solve problems where the police cannot get involved. Detective Miles Hoffman [Michael Ealy] refers problems to her, and Grey McConnell [Jake Johnson], a bar owner and Dex's closest friend, provides moral support and employs her brother Ansel at his bar.

Ontd did you lol @ that Homeland suspect wall of chaos falling down in Hoffman's apartment? Were you glad to see Ansel cleverly get help?

Al Roker, Sheinelle Jones and Craig Melvin discuss the first horror film they've watched. In a survey, the average age of Americans who can recall first seeing a horror film is 10 years.

A survey found that the average person first remembers watching a scary movie at the age of 10!@alroker, @sheinellejones and @craigmelvin reveal the first horror films they saw. pic.twitter.com/d2FpxwuuwG

Lilly Singh celebrated Halloween last night on her show A Little Late with Lilly Singh by dressing up as Patriot Act's Hasan Minhaj, constant hand gestures and all. She later Facetimes Minhaj to mimic him to his face.

Social media person and IDK what else she does Kim Kardashian West decided to recreate Elle Woods' famous video essay from Legally Blonde for Halloween 2019. Unfortunately for her, a better Kim Kardashian video essay was uploaded four months prior:

If you (or your pet!!!!) are dressing up, be sure to take a photo with an I <3 ONTD sign!
Click this spooky link for all the spooky detais!

HAPPY HALLOWEEN! Jamie Lee Curtis releases the first footage of the next Halloween sequel, "Halloween Kills." Jamie Lee will return as Laurie in the new film will be released October 20, 2020! David Gordon Green is directing.

‘Tis the season..... to start screaming. First look at the mayhem David has created for all of you. @halloweenmovie #halloweenkills #strodesstrong @universalpictures @miramax @blumhouse @halloweenmovie pic.twitter.com/klrpzk1Ykg

Kim Petras talks with Playboy about making music, gender identity, and halloween while posing as a country girl at the farm.

This weekend, we’ve got big studio releases Motherless Brooklyn from Warner Brothers and Terminator: Dark Fate from Paramount battling it out with holdovers from weeks past and a few new entrants from the smaller studios listed below.

The films listed are from studios other than the “Big Six” - Paramount, Warner Brothers, 20th Century Fox, Universal, Columbia and Disney. Note that some of the movies listed are in their first week or two of limited release in the USA, so it may take them a few more weeks (or months) to show up in your local arthouse theater or on VOD. Check out the posts from the past few weeks for more movies that may have just opened near you: October 25th, October 18th, and October 11th.

Some recent highly acclaimed releases to search for: Parasite, The Lighthouse, Jojo Rabbit, and Pain and Glory.

Stars: Cynthia Erivo, Leslie Odom, Jr., Joe Alwyn, Janelle Monáe
Writer: Gregory Allen Howard, Kasi Lemmons,
Director: Kasi Lemmons
Genre: Action, Biography, Drama
Plot: The extraordinary tale of Harriet Tubman's escape from slavery and transformation into one of America's greatest heroes, whose courage, ingenuity, and tenacity freed hundreds of slaves and changed the course of history.
What you should know: Cynthia Erivo, the lead actress of the film and an accomplished Broadway performer, sings a song for the soundtrack of the film called “Stand Up”.
Opens in: Wide release

Are you already sad that this season of The Great British Bake Off is over? Don't fret! Canada's got your back! This week, the top 4 bakers from Season 3 of The Great Canadian Baking Show faced off to find out who will make it to the finals! 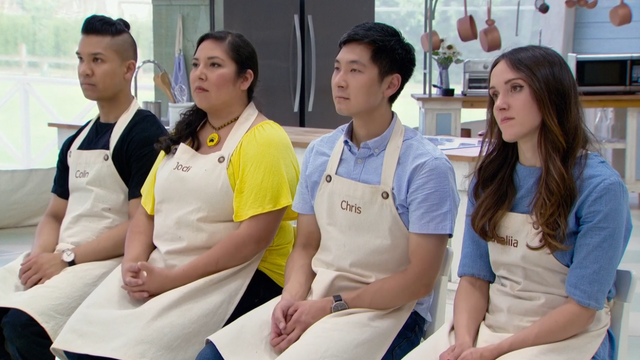 The four remaining bakers are Colin, Jodi, Chris, and Nataliia. (All of them are awesome, lovely people and should get to stay, btw.)

The semifinal theme is Pie Week!

( Collapse )
Next week is the Finals of Season 3 of The Great Canadian Baking Show! We'll see who wins on Wednesday! 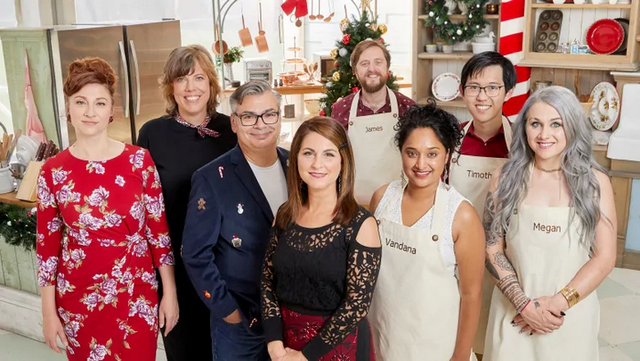 In other exciting news, CBC has announced a new special: The Great Canadian Holiday Baking Show! It'll air on Wednesday, November 13 at 8:00pm and brings back four bakers from Seasons 1 & 2. The four bakers are Jame, Vandana, Megan, and (my bb!) Timothy!

Who else has been watching GCBS? What do you think of the new hosts? Who do you want to win? After the wonkiness with this season's of GBBO being super hard on the bakers and exploiting their emotions, I'm happy GCBS is here.

Halloween Special
Stephen King theme! Sunny is Pennywise, Abby is Carrie, Joy and Meghan are the Grady Twins from The Shining, and Whoopi is the cat from Pet Semetary.

Jordin Sparks won the 6th season of American Idol in 2007. She’s now appearing as Jenna in the Broadway musical Waitress. Her costume is Astrid from How to Train Your Dragon.

Summary of conversation [Spoiler (click to open)]
Jordin explains why she picked her costume. Joy says Jordin’s family didn’t do Halloween. JS says her mom wanted her to be safe, they’d take trips. JS says she did it like 1x every 10 years. Shows photo as dead Dorothy. She went to one of Heidi Klum’s parties. Sunny said her last visit she was pregnant, now her son is 1 ½ yrs old. Shows funny. Asks about being pregnant and a new mom in the public eye. JS compares and contrasts. Says it can be isolating at time. On a group thread with Natasha Bedingfield, Rachel Platton, others. Meghan brings up AZ where JS is from, asks what JS misses about it. JS says hiking, summer monsoons, rainy winters, not having snow, her family most of all. Abby loves Waitress, listens to the soundtrack every other day. JS talks about her role as Jenna vs her real life marriage. Talks about her seeing the show many times before she started the role, what she looked for and noticed. They’re doing 8 shows a week, it’s a lot. She loves having a live audience.

Ontd what is your Halloween costume?

ONTD, which film in the Halloweentown DCOM series is your favorite?

Mine? “Halloweentown II: Kalabar’s Revenge.” We don’t and won’t acknowledge that mess of a last film.

No bitch, it's your sister

You can't outrun destiny just because you're terrified of it. Henry Cavill is Geralt of Rivia.
The Witcher arrives December 20.

.@kellyclarkson gave an epic performance of "I Put a Spell on You" while dressed in a #HocusPocus costume for her Halloween show - watch now! https://t.co/2z13V6kSiC

Kelly Clarkson dressed up as Winifred Sanderson from Hocus Pocus today on her talk show. Kelly and her backup singers performed "I Put A Spell On You."


How are you celebrating?

It's finally Halloween, but some celebs have been celebrating throughout the week. Let's look at some of the outfits they've shared before the big night truly kicks off

Feel free to post more costumes in the comments

Why?: For being a creative genius, a radical thinker, and always standing out, Patti would surely have been scorned by society as a witch. I mean, no one can work words like that without being a little bit magic.

- Jason channeled Elvis Presley on the halloween episode of Ellen on Thursday.

-Ellen's team put the outfit he wore on the show together in three days for his appearance on the show.

-Jason also confirmed that SNL host Chance the Rapper had no  idea he was making his surprise cameo, but he had to come back to L.A.  because his home was close to the recent spate of fires.

-Jason also spoke about the Game of Thrones reunion he recently had with Emilia Clarke and Kit Harington.

Kit Harington doesn't like social media, Jason said he promised Kit he wouldn't post the photo, but he knew that Emilia Clarke would post it so it wasn't his fault.