ONTD, have you ever taken a cruise?

- oh WOW! the drama!
- ms. lópez, ICON and ontd fave, was doing a physical scene with ms. wu.
- ms. lópez, an award winning actress with over a billion dollar box office receipts, is known to not be afraid of getting physical on set had a scene with ms. wu in which she had to forcibly remove a phone from ms. wu's hand
- they bonded over that #moment
- movie comes out september 13! get yo tickets here

have you gotten your tickets yet, ontd?

Welp, it happened. ONTD’s favorite PR Couple Shawn Mendes and Camila Cabello climb to No. 1 on the Billboard Hot 100 with their duet “Señorita.” This is Shawn’s first no. 1 and Camila’s second.

She's really back!! Cote de Pablo will be returning for more episodes of #NCIS later this year https://t.co/n9KKBr9ITH

After the finale aired, it was revealed that Cote would appear in the season premiere. However, it was just announced she's returning for at least two more episodes after that!

The Bachelorette's Rachel Lindsay and Bryan Abasolo Are Married! https://t.co/0Yp5M0QaNy

Open to: All, detailed results viewable to: All. Participants: 68

How long will Rachel and Bryan last?

Will Jojo and Jordan ever get married?

Live from your timeline, we’ve got some news. #SNL pic.twitter.com/7HrcoM8OPg

Ansel- "I was an idiot. I hated everything about myself."

ONTD, which cover is your favorite? This is a safe space.


chromatics | "i want to be alone" [jackson c. frank cover]


bresha webb | "have a good time"/"louder than lies"


the new pornographers | "the surprise knock"


blue hawaii | "all that blue"

she just continues to be a living gift

Hollywood has failed miserably to provide Latinx actors with starring roles in major movies.
The report examined the 100 top grossing movies from 2007 to 2018.
3% of the films had Latinx actors in lead or co-lead roles. 4.5% of all speaking characters were Latinx.
Things weren’t much better behind the camera.
4% of the 1,200 films were directed by Latinx filmmakers. One director was a Latina.
Just 3% of producers were Latino, and most of these producers were men.

The most frequently hired Latinx actors were Cameron Diaz, Jennifer Lopez, Eugenio Derbez, and Jessica Alba.
Roles grew more scarce for Latinx actors as they got older.
Only eight male and two female leads, co-leads or members of an ensemble cast were played by Latinx actors who were 45 years or older.

When Latinx actors got cast the roles they played sometimes trafficked in stereotyping.
A quarter of Latinx speaking characters were depicted as criminals, and 17% were portrayed as poor.
Fifty four percent of the Latinx characters depicted with a job were given occupations such as construction workers and farmers that do not require college education.

· Naomi Campbell took to her Youtube channel to address photos which resurfaced showing the model partying with Jeffrey Epstein, his alleged madam Ghislaine Maxwell and what appears to be then-17 year-old Virginia Giuffre, who says she was held as a sex slave by Epstein. The photos were taken on a yacht in Saint Tropez at Naomi's 31st birthday party in 2001
· In short, Naomi described the Mail on Sunday's piece about the photos as "character assassination." The article came after it was announced Naomi would be receiving an award for her charity work

He had no interest in ever watching the likes of Avengers: Endgame,...
He had some strong words for fans of comic book movies.
Certain sections of the Marvel fanbase didn’t react too favorably to being so vocally and publicly criticized.
Maron responded to the backlash on Twitter.

good times doing the troll dance with emotional baby brains. forgot what an exciting waste of time this can be

Missy Elliot will receive the Video Vanguard Award and give a special performance.

Closing the show tonight are Fetty Wap, Naughty By Nature, Queen Latifah, Redman and Wyclef Jean, who will join forces for the VMA finale.

Feel free to share streaming links with your fellow ONTDers in the comments.

Two new girls come in and try to win JPJ's heart. There are also many tears.

.@Harry_Styles appears on our latest cover. Rob Sheffield rides shotgun with the former boy-band hero as he opens up about sex, psychedelics, becoming a 21st-century rock star and more https://t.co/MmKWtCMZP4 pic.twitter.com/iO7SrRfvKy


Follow up to this post, Harry Styles has a sit down with Rob Sheffield to vaguely hint talk about Sex, Psychedelics and Fame ahead of his anticipated sophomore album, expected to be released this fall.

Federer is the highest-paid tennis player for the 14th straight year.
His sponsor portfolio is unmatched in sports.
Federer signed a ten-year deal with Uniqlo last year that is guaranteed whether he is playing or not.

The rest @ the source

On Michael Jackson: “I’m gonna say something that I’m not allowed to say, but I gotta be real. I don’t believe these motherfuckers. I do not believe it. But let me qualify the statement. I am what’s known on the streets as a victim blamer. You know what I mean? If someone came up to me like, ‘Dave, Dave, Chris Brown just beat up Rihanna.’ I’d be like, ‘Well, what did she do?’ ‘Dave, Michael Jackson is molesting children!’ ‘Well, what were those kids wearing at the time?’ I don’t think he did it.”

“I don’t think he did it, but you know what? Even if he did do it… you know what I mean?” he says. “I mean, it’s Michael Jackson. I know more than half the people in this room have been molested in their lives, but it wasn’t no goddamn Michael Jackson, was it? This kid got his dick sucked by the King of Pop. All we get is awkward Thanksgivings for the rest of our lives. You know how good it must have felt to go to school the next day after that shit?”

Boots Riley shared a criticism he has with Quentin Tarantino’s depiction of the Manson Family cult members.
He took issue with Tarantino’s script for depicting the cult members as hippies with liberal beliefs and not at all dealing with their racism and right-wing views.

Re Once Upon A Time In Hollywood:

The Manson Family were overt White Supremacists who tried to start a race war w the goal of killing Black folks.

They werent "hippies" spouting left critiques of media. They were rightwingers.

This fact flips Tarantino's allegory on its head.

Rapper Future is possibly a father for the 7th time.
Eliza Seraphin filed a paternity case against the rapper.
She is asking the court to establish the paternity of her newborn daughter.
She strongly feels Future is the baby daddy, and if the court orders a DNA test and he is proven to be the father, she can then start the proceedings to collect child support from the rapper.

When she first found out she was pregnant, she claimed Future was not happy about it and even wanted her to get an abortion.
“I got the courage to basically inform Him that I didn’t go through with the procedure and decided to keep the child...He went ballistic! Having members of his camp call me and friends come by my job asking about me. It got so bad, Out of fear, I started to slow down on working.”

Eliza is looking to have Future cover her expenses from the birth and make sure he will support his newest child.

Future already has 6 other children with 5 different women, including one with Ciara. 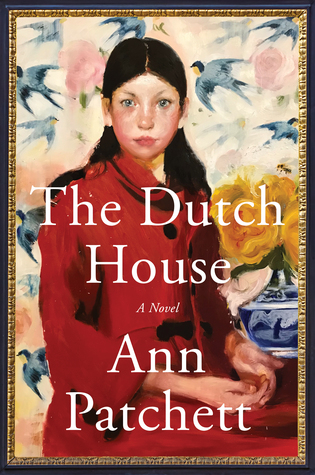 The Dutch House by Ann Patchett

About: At the end of the Second World War, Cyril Conroy combines luck and a single canny investment to begin an enormous real estate empire, propelling his family from poverty to enormous wealth. His first order of business is to buy the Dutch House, a lavish estate in the suburbs outside of Philadelphia. Meant as a surprise for his wife, the house sets in motion the undoing of everyone he loves.

The story is told by Cyril’s son Danny, as he and his older sister, the brilliantly acerbic and self-assured Maeve, are exiled from the house where they grew up by their stepmother. The two wealthy siblings are thrown back into the poverty their parents had escaped from, and find that all they have to count on is one another. It is this unshakable bond between them that both saves their lives and thwarts their futures.

Set over the course of five decades, The Dutch House is a dark fairy tale about two smart people who cannot overcome their past. Despite every outward sign of success, Danny and Maeve are only truly comfortable when they’re together. Throughout their lives they return to the well worn story of what they’ve lost with humor and rage. But when at last they’re forced to confront the people who left them behind, the relationship between an indulged brother and his ever-protective sister is finally tested.

The Dutch House is the story of a paradise lost, a tour de force that digs deeply into questions of inheritance, love and forgiveness, of how we want to see ourselves and of who we really are. Filled with suspense, you may read it quickly to find out what happens, but what happens to Danny and Maeve will stay with you for a very long time.

Showtime is teaming with Viola Davis to star in and exec produce anthology 'First Ladies'.
The drama series is currently in development with an order for three scripts at Showtime.
The anthology focuses on the personal and political lives of the country's most enigmatic heroes.
Season one focused on Eleanor Roosevelt, Betty Ford and Michelle Obama.
Davis will play Michelle Obama.

📷 | Taylor has arrived to the #VMAs pic.twitter.com/z73EcRnOqu

Normani at the #VMAs pic.twitter.com/dQ4r4zIyut

#VMAs: @lizzo is red hot on the carpet https://t.co/tJIt7Jo6lh pic.twitter.com/F4BjOS20CY